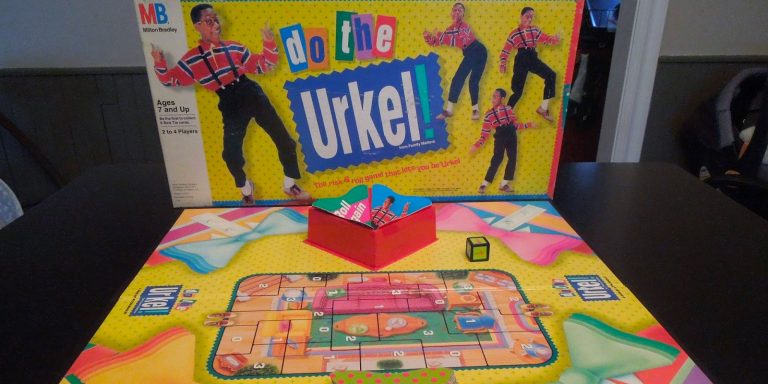 TV shows, movies and bands used to always get board game spinoffs, no matter how awkward and illogical.

We’re living in a great era for board games right now, which seems counterintuitive for our “stare at your phone and don’t look up, don’t ever look up” society. But thanks to the Internet, independent board games can spread, become popular and even secure funding. And analog activities are actually gaining popularity as a respite to our collective daily digital barrage.

In previous decades? Yeah, board games weren’t quite so hot.

There was once a trend where board game companies would create a large percentage of their new games around popular existing pop culture properties. (Kind of like what the film industry does today.) None of the games was ever good enough to stick around and transcend its cash grabby origin. Basically they’d feature some generic board game action and try to make a few bucks quickly on the popularity of the licensed entity.

Here are 11 of those pop culture-inspired board games from the ’90s. I tried to dig up ones that seemed odder than the rest although, really, every board game I found fit pretty well under that designation. 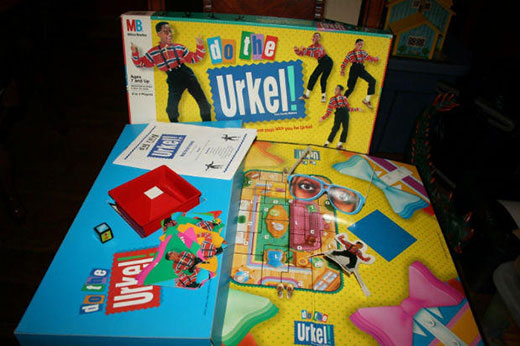 It’s hard to explain why Steve Urkel from Family Matters was such a popular character because, really, he wasn’t popular. He was well-known, thanks to the legitimate power of ABC’s TGIF lineup, but spent a lot of seasons being far more annoyingly annoying than endearingly annoying. That did NOT stop the merchandising train, though. Forget this mailed in board game, he even had his own cereal. 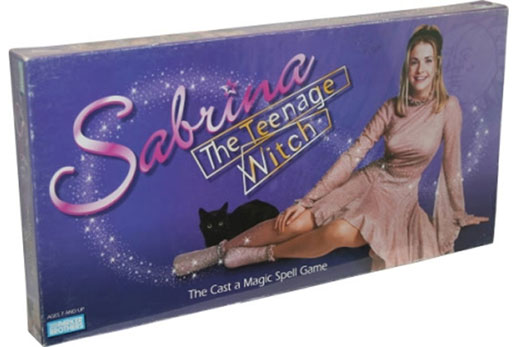 I love this one because of just how egregiously they mailed in that box design. At least tryto make it look like this wasn’t whipped up in 15 minutes on, like, the Wednesday afternoon before Thanksgiving. 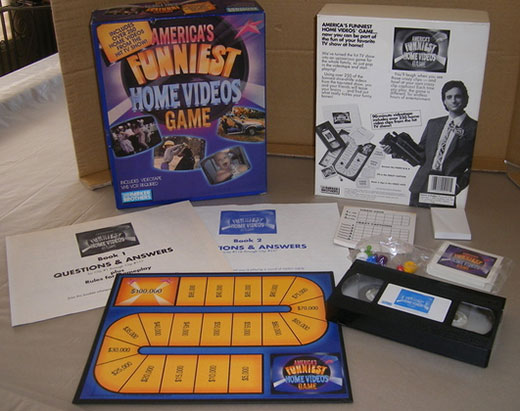 This may be a surprise to younger readers, but once upon a time there were board games based around the VCR. You’d pop in the tape and play clips that would determine the action. They weren’t very good for replay value — since you can’t exactly skip around on a VHS tape, the order was always identical — but at least this game looks kind of complicated. And while complexity doesn’t always equal quality, it’s oddly inspiring to see that someone put a decent amount of effort into conceiving an America’s Funniest Home Videos game. 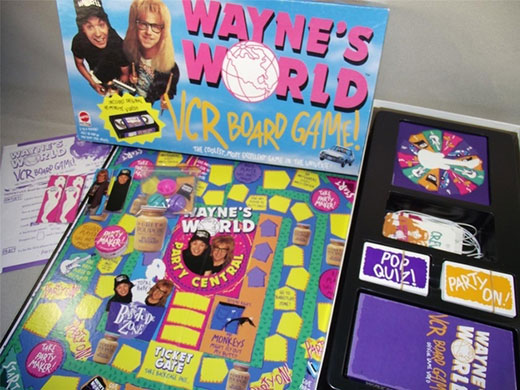 Another VCR board game, featuring a board that abuses every single popular ’90s color and design choice. I do like that the point of the game appears to be moving from jar to jar of Grey Poupon. 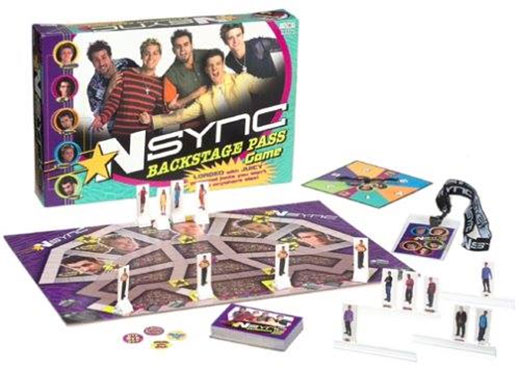 It’s hard to read, but the burst under the title says, “LOADED with JUICY personal facts you won’t find anywhere else.” That doesn’t exactly speak to the gameplay, but I guess it was supposed to really speak to the target buyer. 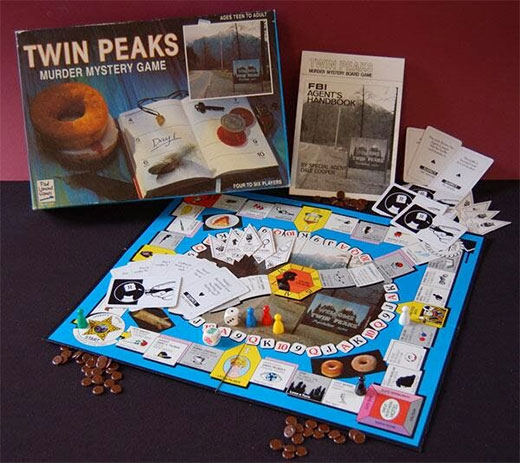 I love how old fashioned the box looks. The game itself seems kind of like Monopoly? And apparently you keep score with pennies? I never watched Twin Peaks. Maybe it involved bagels? 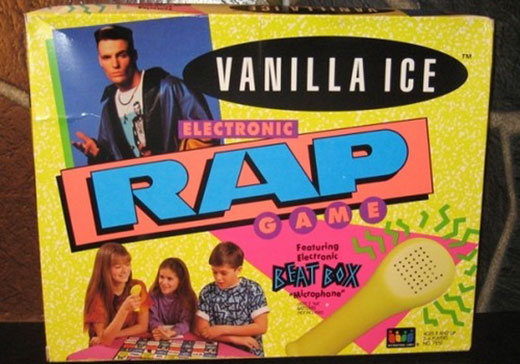 This one intrigues me. Do you get to rap along to a beat produced by the microphone? How does that then translate to a board game? And are those youths on the box cover rapping about girls wearing less than bikinis, packing a gauge and 9 and chumps full of 8-balls? 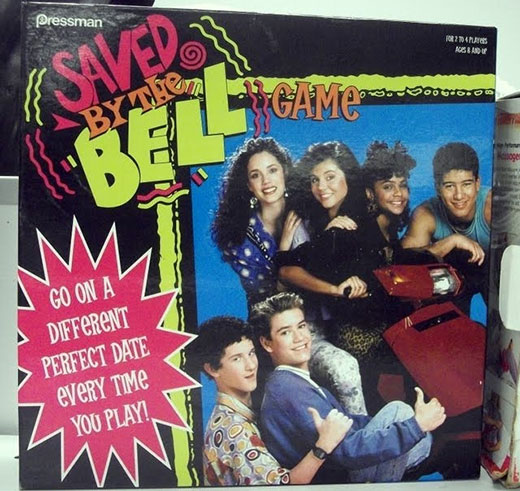 It looks like Screech is holding Zack’s arm. I played this game and it wasn’t great, but let’s consider the alternative… 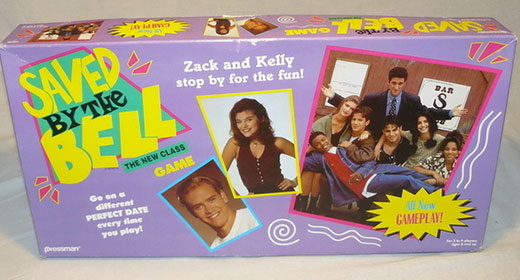 Ah, the poor, maligned Saved by the Bell: The New Class. So unmarketable that the cover of their board game has to devote a solid 40 percent of the box to Zack and Kelly. Tommy D. just never got any love. 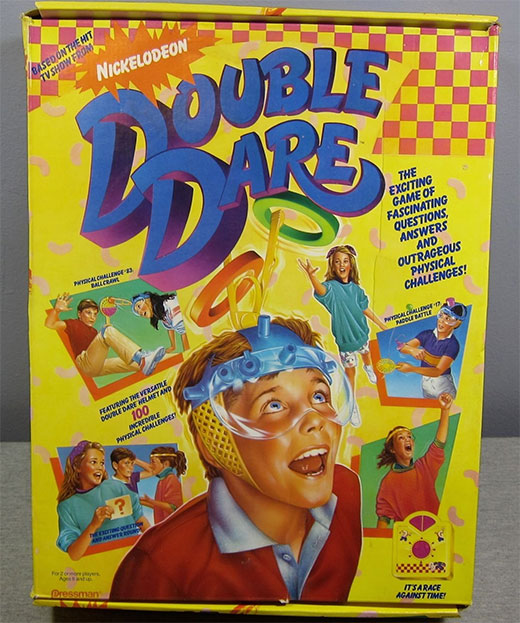 I have to wonder if this game included challenges like: “Go to your kitchen, grab Hershey’s syrup, squirt it all over your stairs, and try to slide down.” That would be a hell of a lot more authentic than this janky looking ring toss and paddle balling. 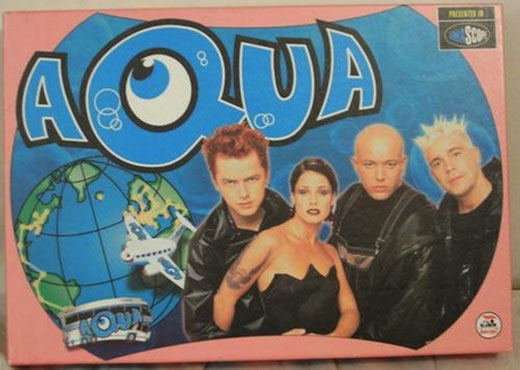 Aqua got their own board game in the late ’90s. If you were going to give them any toy tie-in, wouldn’t it have been infinitely more logical to make something like “Danish One-Hit Wonder Barbie”?