Selling Christmas trees on December 28th is a bad idea… and that’s just one of these.

But that’s another topic for another day. Here are 11 accidentally funny Christmas ads, signs and items for your December 8th amusement…

1 | How dare they destroy your Christmas decorations!? Oh wait… 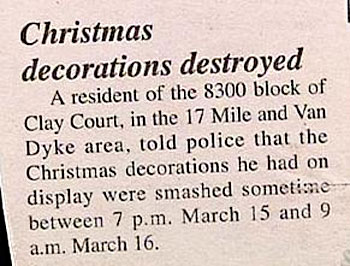 I don’t know if the police have a suspect, but I bet a judge would grant a warrant for whichever one of their neighbors has the most vitriolic knee-jerk response to the word “tacky.” 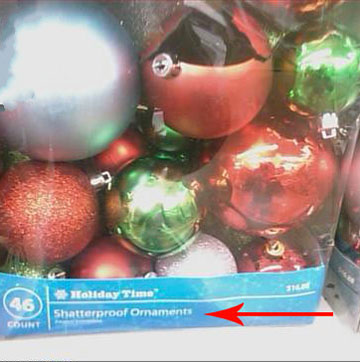 It’s rare you see a product so quickly contradict itself. This is up there with the Easy Bake Oven which isn’t easy, doesn’t bake and isn’t an oven. Or the movie Funny People.

I don’t even mind the word “manure.” You know, it’s “nure,” which is good, and a “ma” in front of it. Ma-nure. When you consider the other choices, “manure” is actually pretty refreshing.

4 | Look at how happy Santa is with his gun 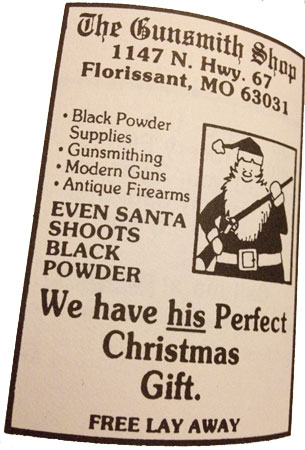 This is a ridiculous ad, but this year, Santa really is going to be running guns like a movie villain from an ambiguous South American country. Fact: This year, on Black Friday, there were 129,166 background check requests from gun dealers. That’s up 32 percent from the all-time high. Apparently, people were arming themselves so they could go shopping *next* Black Friday. 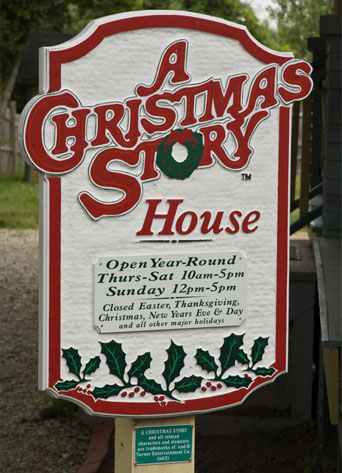 How many people must come here on Christmas to visit, flip out like it’s Wally World, then take the family to a Chinese restaurant? (I know I mixed two unrelated movie references in that sentence, but you can’t talk about people flipping out at a closed attraction without bringing up Wally World. It’s like a law or something.)

And really. How can the house from A Christmas Story be closed on Christmas? That policy contradicts its very name. This is up there with the Easy Bake Oven which isn’t easy, doesn’t bake and isn’t an oven. Or the movie Funny People. Or shatterproof ornaments.

6 | You can really save at those after-Christmas sales 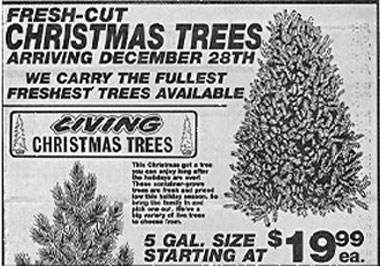 These may be the “fullest, freshest trees” now, but I’m not so sure they’re going to hold up for 362 days. 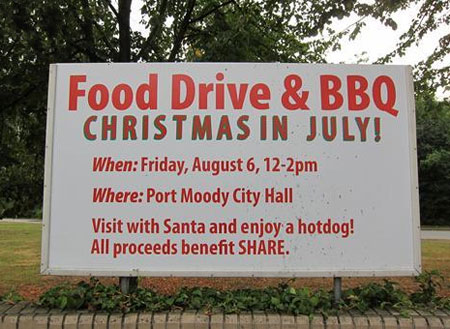 At least hold your Christmas In July in July. Based on current trends, if you wait until August, stores will already have started putting out their Christmas In December stuff already.

8 | The most nutrients are in the ears 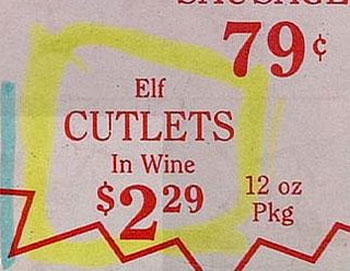 “Daddy, where do Santa’s elves go when they die?” 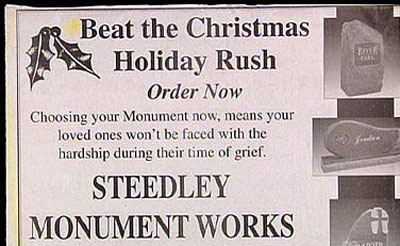 You’ve got to be gearing up for a pretty morbid Christmas when your gift to your family is a headstone for *yourself* so they won’t be “faced with the hardship” when you die. It’s not like you’re going to get run over by a reindeer or something. 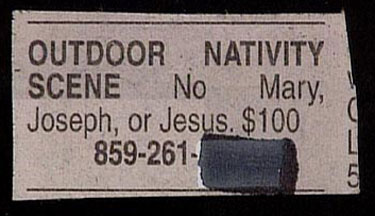 A nativity scene without Jesus, Mary and Joseph? This is like resurrecting that show Two Guys, A Girl, and a Pizza Place but without Ryan Reynolds, the other guy and the girl. All you’ve got left are a pizza place and a laugh track. 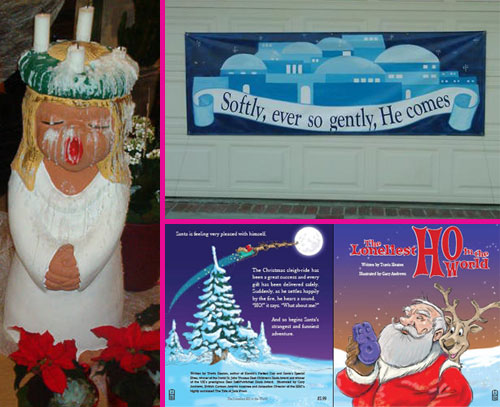 “Ho”-oriented Christmas jokes are a dime-a-dozen, but two ejaculate jokes are tougher to come by.