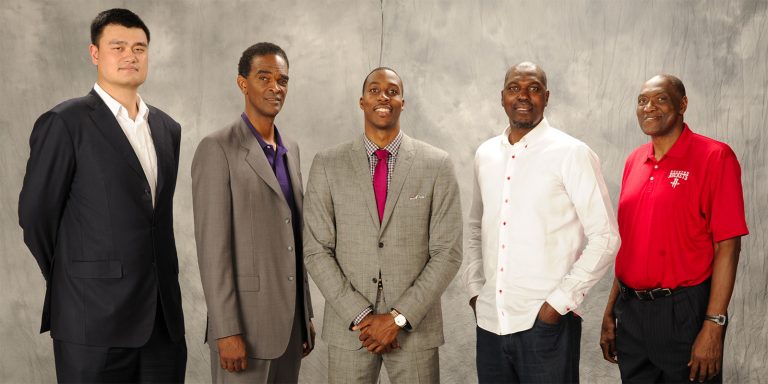 A photo from this weekend’s All-Star Game reiterated that it’s absolutely stunning to see Yao Ming standing next to average (or even large) people.

Over the weekend was the NBA All-Star Game and surrounding events. I didn’t pay a ton of attention, but one photo really caught my eye.

The photo was of Yao Ming, who retired due to several “being a giant”-related injuries a few years back. He’s still involved with the NBA as an ambassador for the game and was at All-Star Weekend. And he was there, apparently, to tower over his agent. (The photo is the first item in the list below.)

There’s something stunning about seeing Yao Ming next to an average-sized person. He’s not just taller (at 7’6) — he’s also just bigger in every way. He’s well over 300 pounds but doesn’t look even a tiny bit chubby. His head makes the kid from So I Married an Axe Murderer look reasonable-headed. He’s just a whole lotta man.

Here are 11 incredible photos of Yao Ming next to other people that only sort-of begin to give you a sense of just how big he really is. 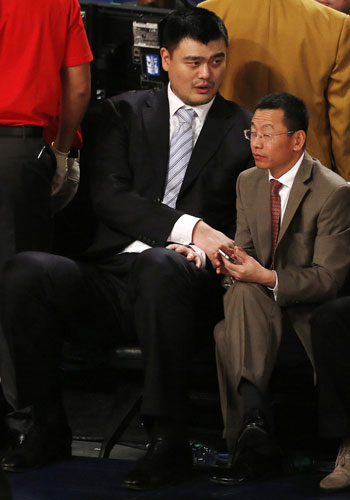 This photo was taken mere days ago so, yes, Yao Ming is still towering over people. And, in some cases, almost appears to be a ventriloquist with a dummy. Use the iPhone in his agent’s hand for scale. 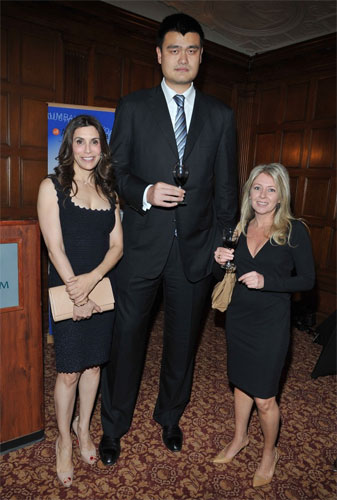 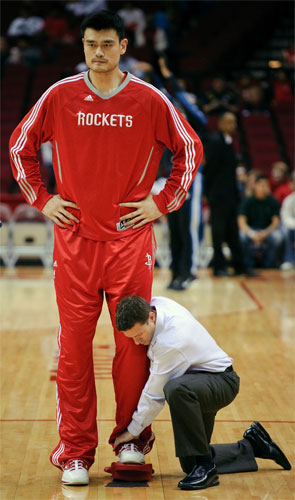 The trainer squatting down makes him look more like a barnicle than a human. It’s also not entirely clear if Yao notices him down there or not. 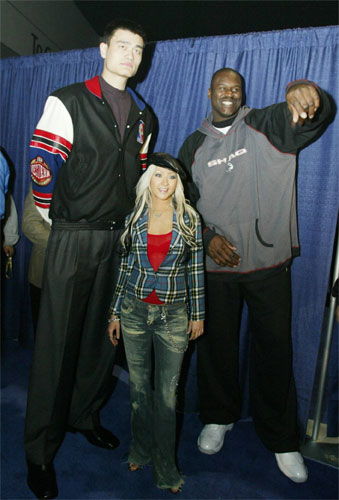 Here he even manages to make Shaq look like a normal-sized human, which is an incredibly rare feat. He also makes Christina Aguilera basically vanish — a solid feat, as this photo was taken during her turbo-charged “look at me” era. 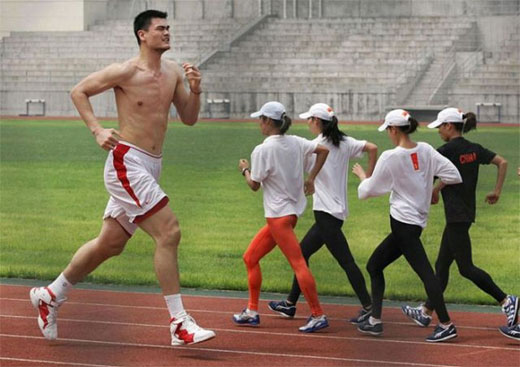 You have to wonder what those women thought when they looked up about 20 seconds earlier and saw a giant man bearing down on them. I’d guess their pace increased enough that they’ll all set personal records on this run. 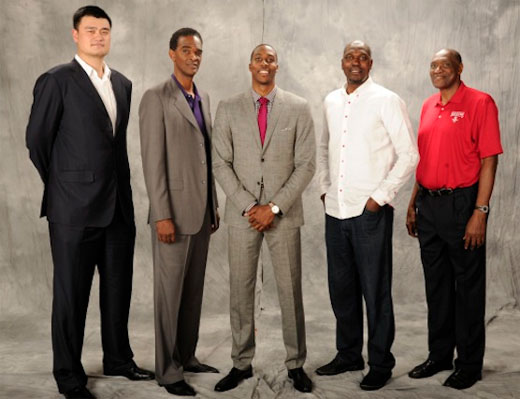 This photo of once and future Houston Rockets centers is a pretty incredible photo since Dwight Howard looks tiny in the middle — and he’s seven feet tall, putting him in the top one percent of one percent of height in the world. I’ve stood next to Dwight Howard (I interviewed him a few years back) and he’s the most physically intimidating person I’ve ever seen. 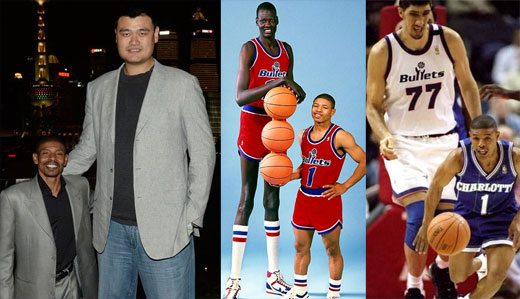 You’re not a true NBA giant until you get your photo next to Muggsy Bogues. (And until the Washington franchise debates wildly overpaying you. But mostly the Muggsy thing.) Even though Muggsy and Yao weren’t in the league simultaneously it’s great they got together to keep the photo legacy alive — although it didn’t turn out quite as stunning as Manute’s. Maybe someone should’ve called in the experts at Sports Illustrated For Kids to really help sell it? 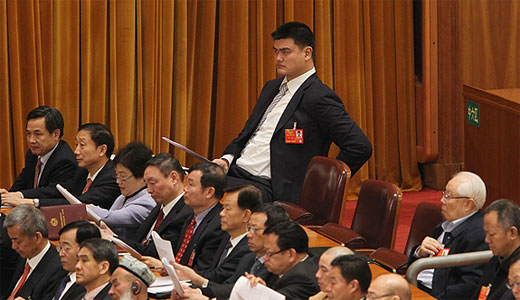 It’s hard to get away with looking super bored at a meeting of world leaders when you’re the tallest person in the room by around a foot and a half. 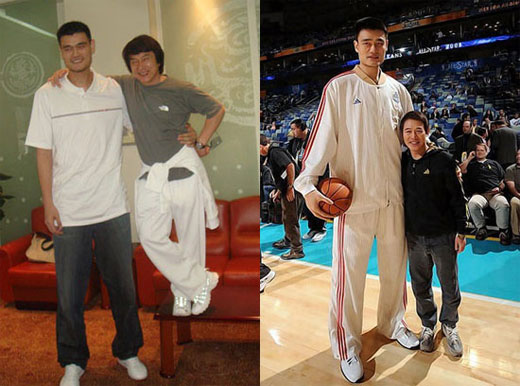 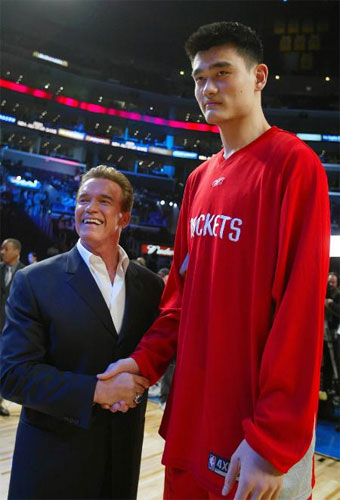 It puts the entire Terminator thing into perspective to see this. Also, with the way Arnold towers over Sylvester Stallone in photos and Expendables camoes, it also puts Rocky into perspective. 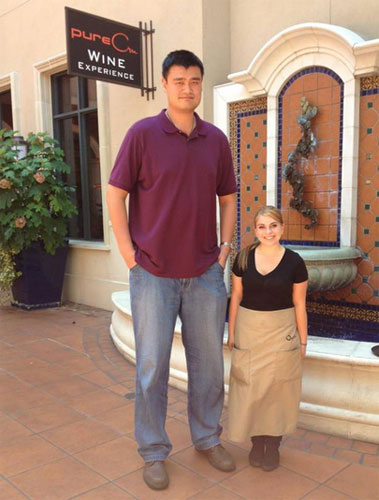 The woman in this photo is 4’11; most of us would tower over her. So I included this to make everyone feel good and confident and tall. Except her, I suppose.