11 Most Badass Jews in History 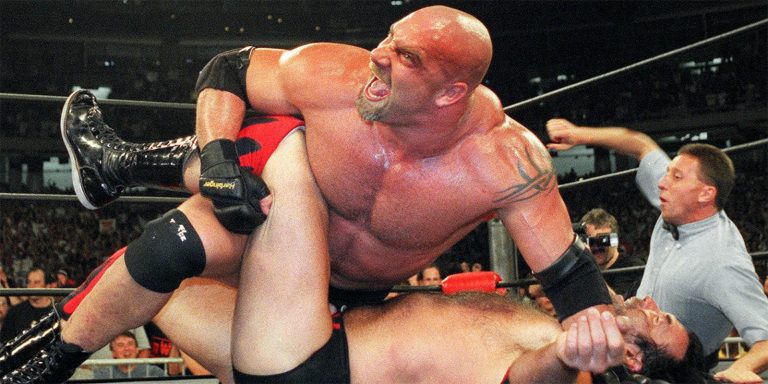 From the Maccabees to the Three Stooges, and everyone in between.

Hanukkah begins tonight, so I thought this would be a good time to bust out this list I’ve been researching for quite some time.

The story of Hanukkah centers around the Maccabees and their badassery (more on that in the first point). So, in honor of the holiday, I put together this list of the 11 most badass Jews ever.

The qualification is simple: I’m not looking for Jews who became badasses by outsmarting people. We all do that. It’s old news. I’m looking for ones who really rock the shit — hand-to-hand combat, deadly assassins, gangsters, soldiers. Basically, if you messed with these Jews, you’d have to worry about more than them finding a way to ruin your credit rating.

This list is in no particular order (and, ignoring Adam Sandler, this list does not include a baby produced by Lenny Kravitz and Courtney Love)… 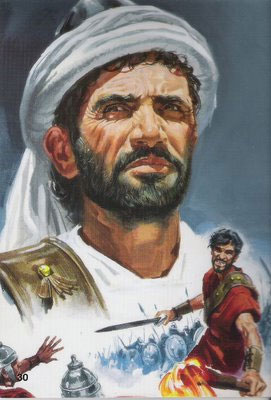 The Maccabees led Jewish fighters into battles against the armies of Seleucia, Syria and Rome… and won. I like their policy of diplomacy: You want to sacrifice a pig in our temple? We will kill you.

Their name is also the go-to when a Jewish school or club is looking to pick a nickname for a sports team. “Should we go with the Fightin’ Maccabees?” “Yeah, probably. It’s either that or Wildcats.” 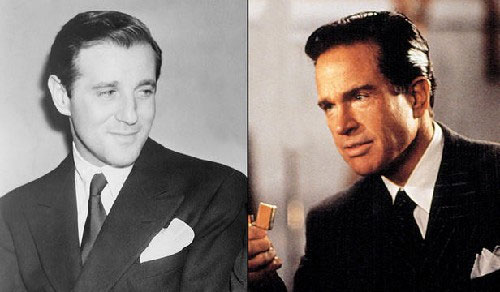 The most famous Jewish gangster ever. He was the driving force behind Las Vegas and the “muscle” of the early Jewish gangsters — it’s estimated he hit or ordered hits on at least 50 people.

There were (and, I suspect, still are) many hardcore Jewish gangsters; Bugsy Siegel is going to be this list’s representative for all of them so that I don’t end up just writing a history of Jews in organized crime.

You know Bugsy’s hardcore because, when he got the biopic treatment, the role of Bugsy Siegel was played by Warren Beatty. No Jason Alexander or Paul Reiser casting here. I mean… Bugsy was right in line with Beatty’s other badass characters… like Dick Tracy, Clyde Barrow and Senator Jay Billington Bulworth. 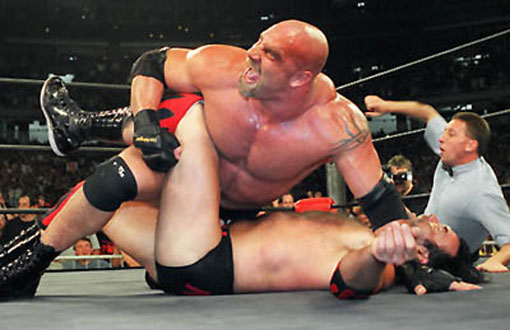 He played defensive end for the Atlanta Falcons in real sports… he defeated Hulk Hogan in a legendary WCW World Heavyweight Championship match in faux sports… and even played a murderin’ Santa Claus in the 2005 movie Santa’s Slay.

There have been many successful Jewish pro wrestlers — Scott “Raven” Levy, Marc Mero, “Macho Man” Randy Savage, The Genius, Billy Kidman, Dean Malenko, both Nasty Boys and, most importantly, Barry Horowitz — but Goldberg is the only one who rose so high on the card that he had 20,000+ Southerners chanting “GOLD-BERG! GOLD-BERG!” in every arena he set foot in. 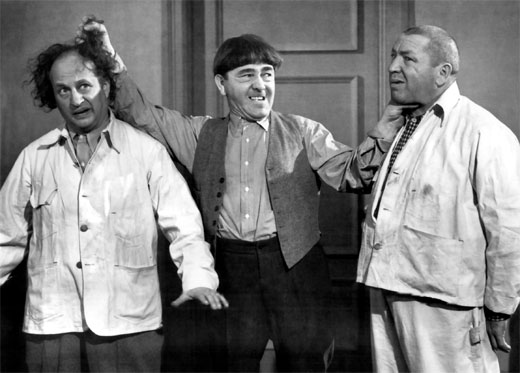 Have you ever been poked in the eyes while someone else smacked you in the face… AND called you a chowderhead while doing it? That ought to be Webster’s definition for “badass.” 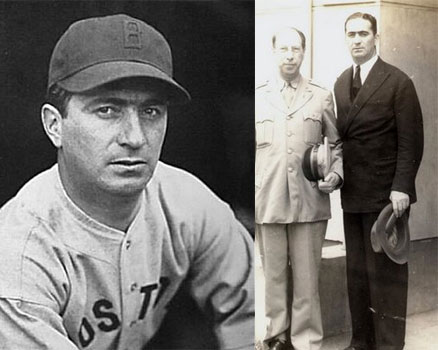 He’s probably the most obscure name on the list… but definitely one of the most deserving. Berg was a catcher in Major League Baseball from 1923-1939… then went on to serve as a Office of Strategic Services (later renamed the CIA) spy for the U.S. in World War Two.

That seems like it could make a good TV show — Major League baseball player by day (I’m assuming he’d play for the Cubs to make that work), CIA operative by night. Someone get JJ Abrams on the phone. Or, if he’s not available, his non-union Mexican counterpart. 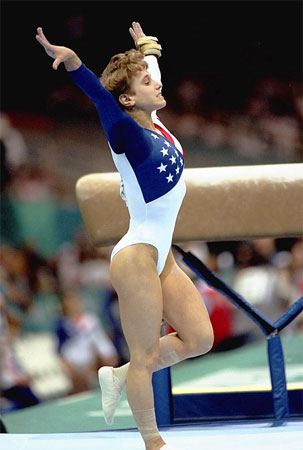 She stuck that famous Olympic vault landing with a busted ankle… AND defeated menstruation. Name one other Jewish woman who’s that tough. 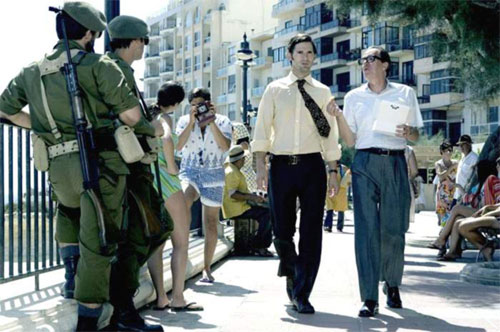 There’s a scene in Knocked Up where all the Jewish guys discuss the movie Munich… and how great it was to watch Jewish guys going around, getting revenge, taking people out.

I saw Munich and had a different reaction — it jarred the crap out of me and totally ruined any future Eric Bana sex scenes for me (whoa! did I say that out loud?) — but, yeah, Jews kicking ass is cool. Even in fictionalized-version-based-loosely-on-real-events form. 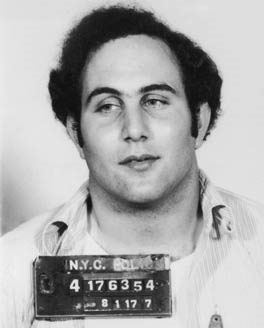 Badass doesn’t necessarily mean “good.” So while it’s a little off-putting to have a serial killer on this otherwise-celebratory list… before he became a Satanic murderer, he was born a Jew… and, yeah, he’s one scary son-of-a-bitch.

Come on. It came down to me including either him or Jay Fiedler. Like you would’ve gone with option B.

I mean… he’s slayed like 200 times more women than Berkowitz. 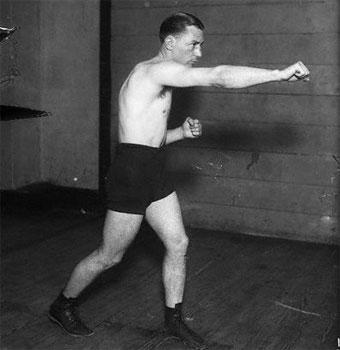 Leonard is one of the greatest boxers of all time (at least according to Ring magazine, who ranked him the 8th best fighter, and 2nd best lightweight, of the 20th century). He retired (and like any real boxer, un-retired and retired again) with a career record of 183-19-11.

Basically, he’d boxed in the modern era, he would’ve been an aspirational icon of toughness for all Jews… just like Mike Tyson was for blacks, Manny Pacquiao is for Filipinos, or Sugar Ray Leonard was for Mark McGrath. 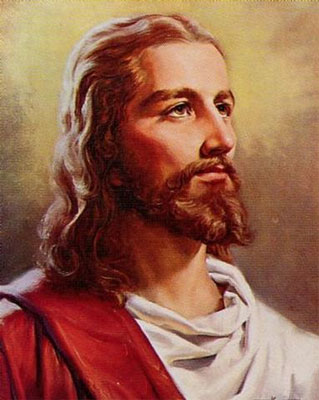 He was brutally tortured in a way that would even shock Mad Max… and STILL was badass enough to just take it in stride and die for your sins. Let’s see Kerri Strug do that.