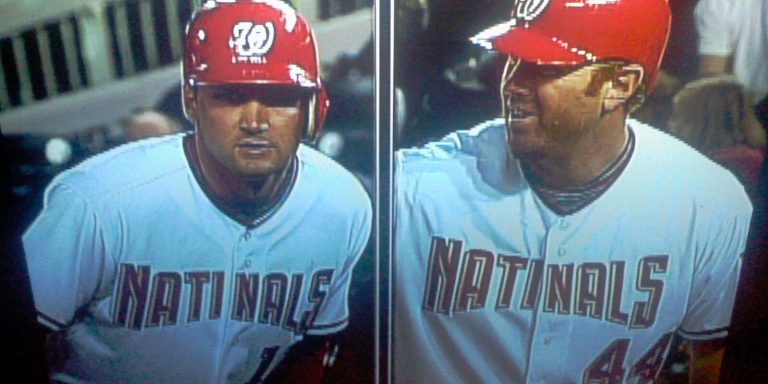 Misspelling a player’s name happens. Misspelling the name of the college or team? That seems harder to do — yet it happens.

This entire list happened accidentally, after a discussion over exactly how many Canadian Football Teams are nicknamed the “Rough Riders” led me to Googling that phrase… which led me to the first entry on this list… which led to the entire list. (There were originally two, by the way. Now there is one.)

Sometimes an equipment manager sews the letters onto a jersey incorrectly, and sometimes a company prints a jersey wrong. But in either case, as long as someone caught a photo, that error can live on in Internet infamy. Here are 11 great spelling errors on sports jerseys and apparel.

So turn the lights down and light a candle, it’s time to get pedantic. 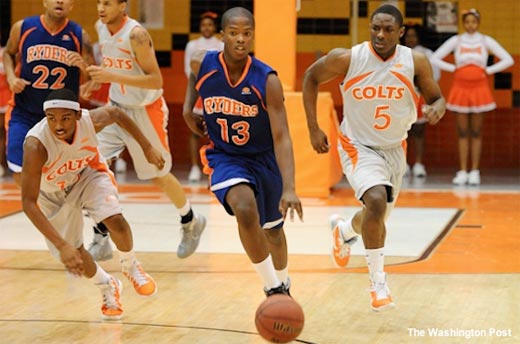 They’re nicknamed the Rough Riders because of Teddy Roosevelt Spanish-American War cavalry — they’re not named after the condoms, DMX and his crew, or either of the CFL teams. This “Ryders” spelling error moved them closest to DMX — at least as I recall from my fuzzy days of white rapping along to Ruff Ryders Anthem. Also I would never use condoms called Rough Riders. If there was a brand called “Gentle Bystander” that would be my pick. 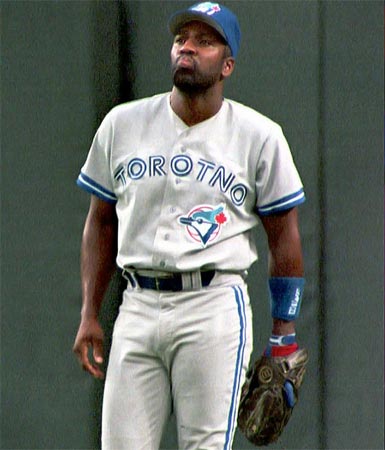 Apparently it took Joe Carter until the 6th inning of this game before he realized his jersey misspelled Toronto. I wonder: How long do you think he paused to ask himself, “Wait, is this another one of these Canadian spellings I see everywhere up here? I mean, if it’s the Montreal Canadiens, then couldn’t we very well be the Torotno Blue Jays?” 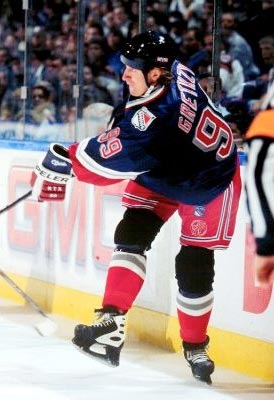 Uber fame does not guarantee immunity from spelling errors. Especially if you’re in the carpetbagging phase of your career. (That Rangers dig is for my oft-mentioned friend Steve who’s an Islanders fan. I have no allegiance in hockey other than to either mock him or support him. Or to ask him if his team would do better if they followed NES Ice Hockey logic and switched to two fats, an average and a skinny.) 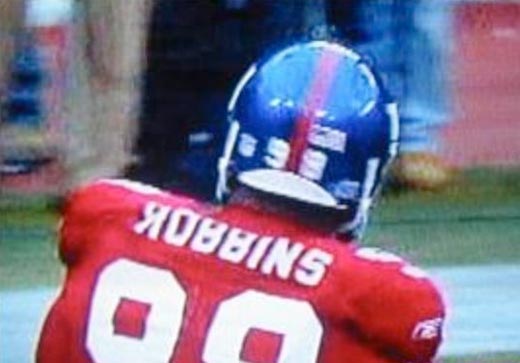 Fred Яobbins with a backwards R isn’t quite as catchy of a use of the backwards Я as the one in Toys ‘Я Us… but it does sound like it could be a moderately-priced, Bennigan’s-style restaurant chain. 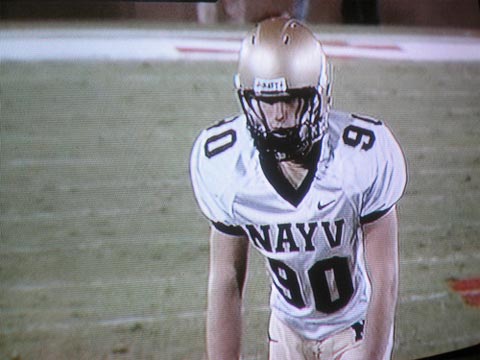 Any Simpsons fan worth their mumu will have the first instinct: “That’s blatantly part of the ‘Yvan Eht Nioj’ campaign.” 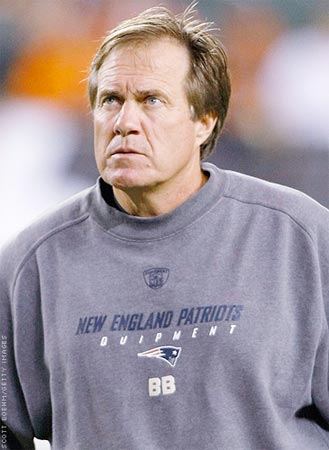 I’m sure the teams provide the coaches with their outfits. And I know Belichick is a multimillionaire. But knowing everything we know about him and his slovenly tastes… would it truly surprise anyone if we found out he was buying factory seconds from TJ Maxx just to save like $4? 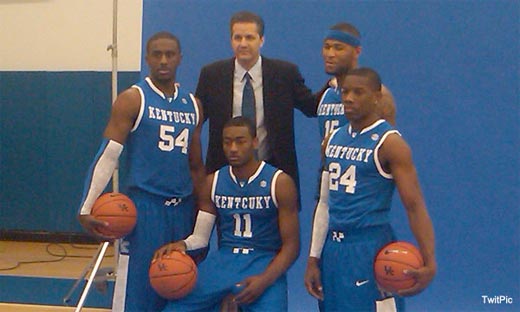 Look, I’m not gonna hold this one over John Wall. Kentucky wasn’t paying him to copy edit. But this picture only leaked out because John Calipari didn’t notice the mistake and tweeted this picture before Nike could confiscate it. And that confirms juuuust about everything we suspect about Calipari. 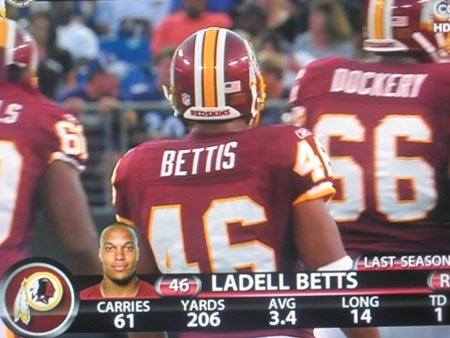 Show any Redskins fan that photo (or, at least, the part above the “Ladell Betts” chyron) and watch them light up with momentary glee… and then quickly crash down to Earth when they realize Bettis ain’t walking through that door. 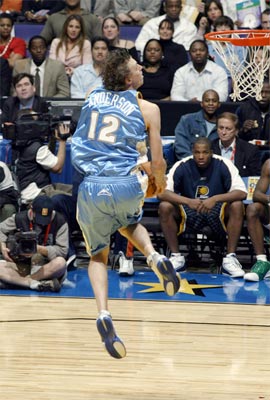 I have no idea if Chris Andersen even knows how to spell his own name. Or if the equipment manager would use the “Hans Christian Andersen” nerd-monic device that I would. But he didn’t just wear this erroneous jersey during some innocuous regular season game. He wore this during the 2004 slam dunk contest. And that seems crazy, even for him. 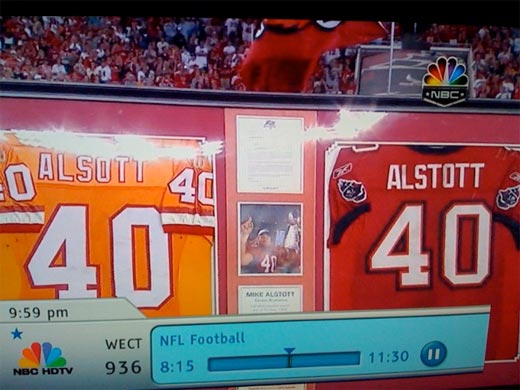 Notice the difference between the jerseys? Seems like a horrible thing to do to a dude the night you’re retiring his number, right. Well… kind of.

Turns out the typo on the old school Bucs jersey was intentional here. Because when Mike Alstott first debuted with the team, they actually made that error on his jersey for his first few weeks. And he was too intimidated to say anything. So… I guess that makes this error ok.

Side note: How many people just read this and said: Wait, Mike Alstott retired? How the hell am I going to do my annual fantasy pickup of him around week 9? 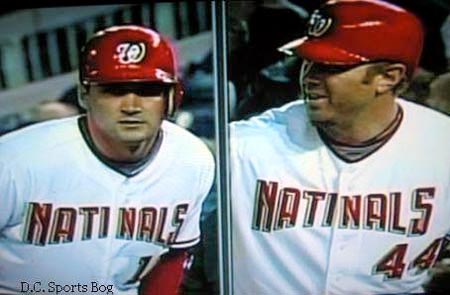 Someone must have made the “well, we always knew the team didn’t have any ‘O'” joke already, right?

11 Cakes with Glorious Typos and Errors