Real mascots who are so ugly they’re adorable. In an ugly sort of way.

I was watching some of the Olympics over the weekend and, at one point, they showed China’s official mascots. They’re five cute little multicolored characters and, honestly, they’re not bad. China showed a lot of restraint in making these mascots.

Which, clearly, is very, very difficult to do. I got on a brief mascot kick and put together this list of the 11 ugliest… and, therefore, best… mascots in sports. I’m sure I missed a ton. A TON.

So with apologies to the San Diego Chicken (who was left off this list for not being ugly enough), here’s what I’ve got… 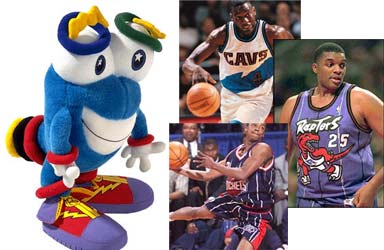 Remember what I said about China’s restraint? Twelve years ago, Atlanta took the exact opposite approach. They decided to make their mascot hideous, over-the-top and a true embarrassment.

The Atlanta Olympic mascot was Izzy, which was a nickname shortened from “Whatizit”. According to what I’ve read, they picked him because, with the technology at the time, computer animators believed they’d be able to do the coolest animations and morphing with a turquoise blob. This was a roundly criticized, terrible decision by the people behind the Atlanta Olympics.

In their defense, it WAS the mid-’90s, and, back then, somehow, companies got the word that hideous was the way to go. Remember when all the NBA teams redesigned their jerseys in that era to make them hideous (the Rockets, Raptors and Cavs are shining beacons)? 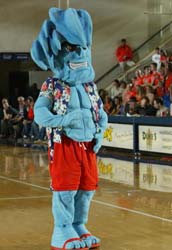 Many years ago, I was on a flight from Chicago back to L.A., and I found myself in the dream scenario. That is: You see an absolutely gorgeous girl in the terminal and she winds up in the seat right next to you. Thanks to my suave pickup line (I believe I noticed a photo of a Real World cast in her magazine and mentioned it), she and I got to talking during the flight.

Anyway, it came out that she was a senior at Pepperdine (which is in the Malibu area) and she didn’t have a boyfriend. At an uncomfortable lull in the conversation, she pulled out her book to read. Thankful for a new conversational opportunity, I asked what it was. She said, “Oh, it’s a book about relationships and Jesus Christ’s role in helping each of us find the one that will make us complete.”

I bring up this story only because it just feels so strange to me that a school that’s installing such strong Christian values would be represented by Willie the Wave — an absurd looking, straight-out-of-the-’80s half surfer, half turquoise hippie. He looks like he could stand to spend a few weeks at sexual re-education camp. 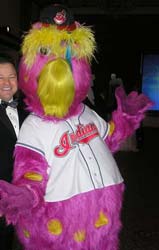 I’m a big Cleveland Indians fan (even in years like this where management decides that giving playing time to mediocre journeymen veterans is more important than hitting or winning game). So I have a special place in my heart for Slider.

To me, Slider is THE best example of a team’s management sitting down and saying, “Well, shit. Our real mascot is offensive as hell. What should we do?” “I don’t know. Let’s throw some pink hair and a yellow nose on a blob and call it a day.”

And that’s why Cleveland games feature Slider, and not an oversized Chief Wahoo running around making a tomahawk chop hand signal and offering fans bites of maize, puffs off his peace pipe, or 4-1 on the five horse in the seventh race at the Meadowlands. 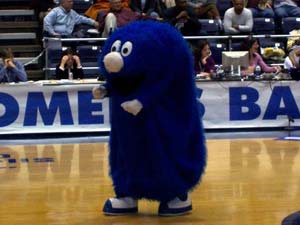 Xavier has two mascots. The first is D’Artagnan, which is completely apropos, being that they’re the Musketeers. The second, though, is named the Blue Blob. He is much less apropos.

In fact, on Xavier’s mascot website, they go into great detail about D’Artagnan, the Musketeers name and his origin. Then they get to the Blue Blob, which they give no backstory for. It’s like they thought D’Artagnan wasn’t cuddly enough for the kids, so they hired a kid to draw him a sidekick. But they only gave that kid one Crayola crayon and 45 seconds to do his conceptualizing and drawing.

The Blue Blob is kind of like the love child of Grover and Jabba the Hut. That makes him ugly, which, to me, makes him beautiful. 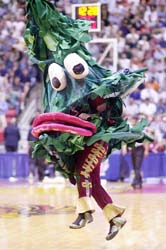 The Stanford Tree is legendary, mostly because it so belies what Stanford is all about.Shouldn’t a school that won’t let you in unless you’re some kind of supergenius from sub-Saharan Africa who, by age 17, cured a disease, reunified a country, AND was active in yearbook or SADD, be more brand-conscious when it comes to picking a mascot representative of that quality standard?

The tree is goofy looking, sort of resembling an ill-conceived collage made by a not-that-artistically-skilled fourth grader during a summer camp arts and crafts session.I’d venture to say that if the Tree lived in a house, it would be made out of dried macaroni glued to a piece of paper. 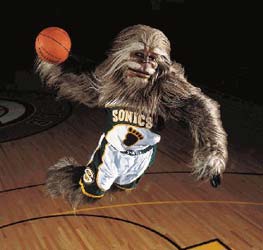 When your nickname is the Supersonics, there’s really no logical mascot (other than Sonic the Hedgehog in a Superman costume, although that might violate just a couple of international copyrights). So the Sonics decided to go with something from the region… the Sasquatch.

And that’s how their dunking half-Chewbacca, half-Teen Wolf came into being. (I don’t even like Star Wars, by the way — I have no idea why I keep referencing it today.)

Let’s hope that now, as the franchise pulls the biggest dick move this side of Art Modell and heads to Oklahoma City, they keep the hideously beautiful Squatch around. Instead of Oki-fying him and making him into a cowboy or line dancer or fightin’ prairie dog or something. 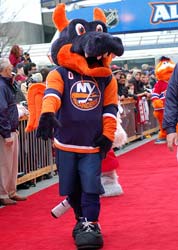 Here’s the thing. Sparky’s kind of cool. He’s semi-intimidating to opponents. I could see kids liking him. On the surface, there’s nothing about him that should be embarrassing.

My conclusion: The Islanders aren’t just sharing their mascot… they’re getting sloppy seconds from an ARENA league football team. You think the Rangers would ever let that happen? 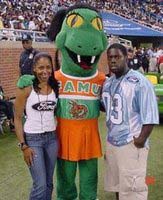 You don’t see many female mascots. In fact, they’re almost always male or androgynous. (I have no idea what the Seven Sisters use for mascots, and I’m not feeling particularly research-y today. Let’s just assume they’re, like, the Barnard Animals or the Mount Holyoke Mountin’ Holy Oaks.)

But FAMU decided to go with a lady rattlesnake. And that’s progressive. Sadly, they made her not so much a mean, threatening, intimidating lady (like I’m sure the Mountin’ Holy Oak is)… but rather, the kind of lady rattlesnake you take to see the opera.

She’s got big, doey eyes… a prim, old-fashioned haircut and a cheerleading skirt that sits just north of the knee in a respectable manner. (Yes, this rattlesnake has knees.) She’s also smiling. It’s adorable. 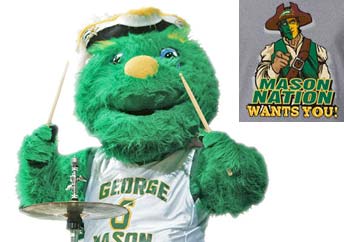 Gunston is a green muppet, and, like many muppet mascots, his phylum, genus and the like fall under the “unknown” category. He’s just a furry green guy wearing a hat.

Apparently, after their Final Four run, the school was so embarrassed that their mascot was so small time that they immediately began trying to get rid of him. Now, they’re represented by a colonial patriot looking guy wearing yellow and green face paint. I prefer Gunston. 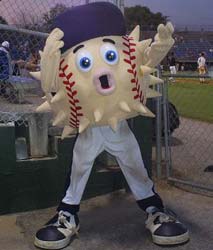 This might’ve been one of those cases where it would’ve been smarter to go with a random colored, random shaped, random specied mascot.

But the minor league Columbia Blowfish decided to try to make their mascot a blowfish… and the result was a giant, off-colored baseball with large spikes protruding out in all directions. Not exactly kid friendly. But he sure is awesomely ugly. And that’s what I care about.

(Also – side note: I learned while writing this that the Blowfish play in a place called Capital City Stadium. Which means their mascot should clearly be the Capital City Goofball and not the blowfish. Or, at least, it should be Dancin’ Homer.) 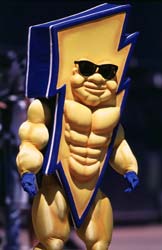 Because there’s nothing sexier than a yellow and blue lightning bolt who’s clearly been religiously doing his eight-minute abs tape.