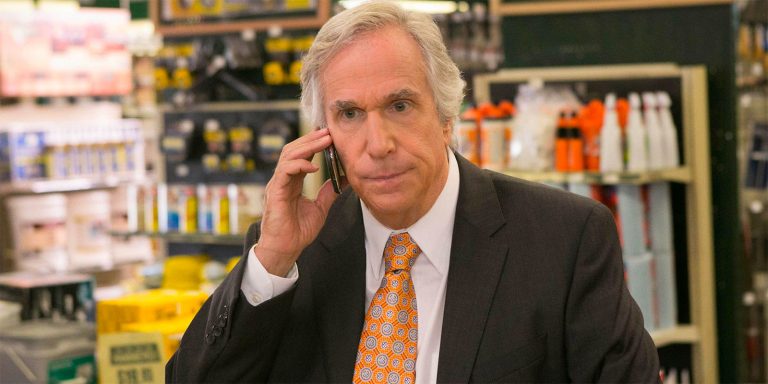 As long time readers will know, I love Arrested Development — but I’ve never done a list about it. Well… I couldn’t wait any longer to remedy that.

One of the main reasons Arrested was so beloved by some but alienating to most was that it required active viewing. They were going to take their 22 minutes and pack them so full of jokes, allusions, references and callbacks that you couldn’t afford to blink. I’d say you have to watch each episode at least three times before you feel like you’ve finally caught everything — and even then, if you check out Arrested websites or boards you’ll see people pointing out jokes that flew past you.

For today’s list, I decided to pick out one of my favorite nuances of the show — its unprecedented fourth-wall-shattering references to its actors’ previous roles. During its three seasons almost no one was safe from a shout out to their past — cast members, guest stars and narrators/producers all got swept up in those nudges to the most hardcore fans.

Here are 11 of the best times when Arrested Development makes a reference to an actor’s real life or past roles.

1 | Henry Winkler making the Fonz pose and jumping a shark 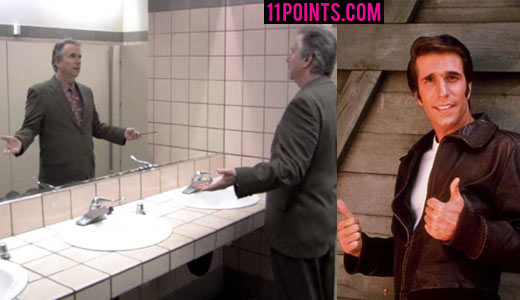 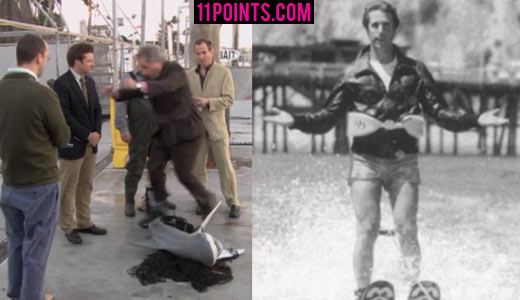 Henry Winkler playing against type as the incompetent, foul-mouthed, bi-curious family lawyer was one of the great casting coups of Arrested Development. Also, if any show deserved to have Winkler recreate both his classic Fonzie pose AND his infamous shark jumping, it was this one.

Someday I’m going to do a list of the 11 best supporting characters from Arrested Development and it’s going to be awful hard not to make Winkler’s Barry Zuckerkorn number one. Although he’ll get strong competition from Gene Parmesan, Steve Holt, and (if he’s eligible) Franklin Delano Bluth. 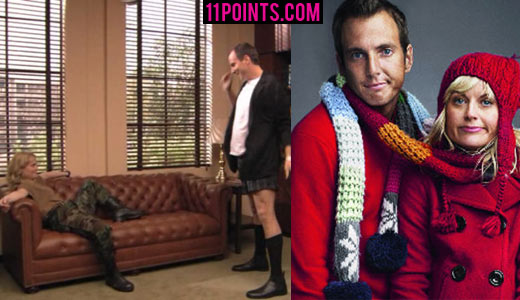 Amy Poehler and Will Arnett are married in real life, so it was logical to cast Amy Poehler as GOB’s unnamed seal-dealing wife. (Although I’m going to go with GOB’s theory that his super-hot wife with huge cans is named Crindy.)

Side note: In March of ’04, so partially through the first season of Arrested, I saw Will Arnett and Amy Poehler walking through a casino in Vegas. I said hello to Will Arnett and told him how much I liked the show. Amy Poehler looked surprised — and I actually thought it might’ve been the first time in their relationship that a fan recognized (or approached) him and not her. I’m just going to go on thinking I have that distinction. 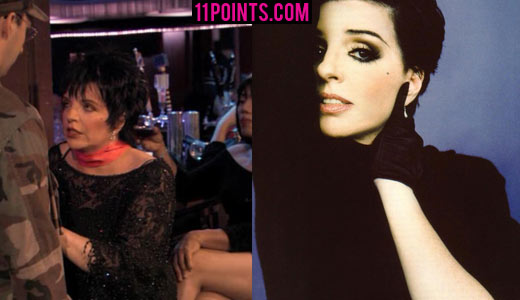 I definitely didn’t recognize this one right away. In the episode “Queen For A Day”, Liza’s Lucille Two character goes into Tobais’s nightclub and hears him singing New York, New York. She exasperatedly says, “Everybody thinks he’s Frank Sinatra.”

Turns out this was addressing a long-standing beef of Liza’s. She actually recorded New York, New York a few years BEFORE Sinatra… but he’s the one who’s associated with the song. I like it for two reasons: One, it’s a solid reference… and two, this scene put Liza in a gay/drag club and managed to show some restraint with the joke they went for.

4 | Charlize Theron in Monster as her “pre-plastic surgery” photo 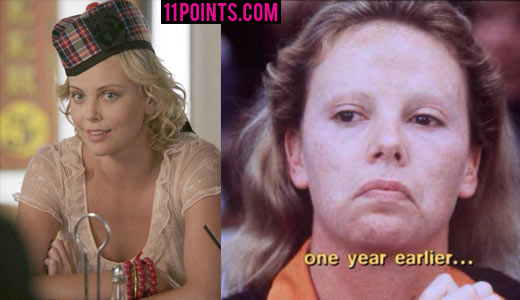 This was a really strong one. When it’s revealed that Charlize Theron’s character Rita has a lot of money (she owns all of Wee Britain AND the Wee Britain in Cleveland), her uncle talks about how she had plastic surgery to look like she does now. Then they flash up the photo of Charlize from Monster… where she gained a ton of weight and took every possible measure to make herself look terrible. It’s a laugh-out-loud shout out, because you never, ever see it coming… but afterward it makes so much sense. 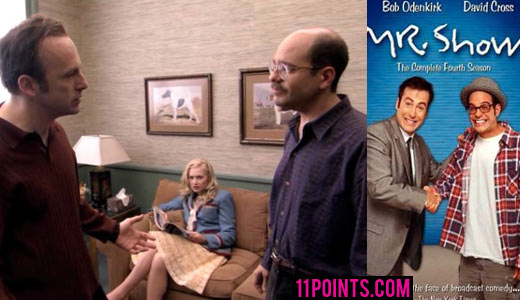 It was extraordinarily unsurprising when David Cross’s Mr. Show partner Bob Odenkirk showed up as a therapist just a handful of episodes into the first season of Arrested. It was like when Adam Carolla was a guest on the first week of Jimmy Kimmel Live, or Kyle Gass had a cameo in School of Rock. Some comedy duos are just attached at the hip, even when one goes on to become a little (or a lot) bigger. 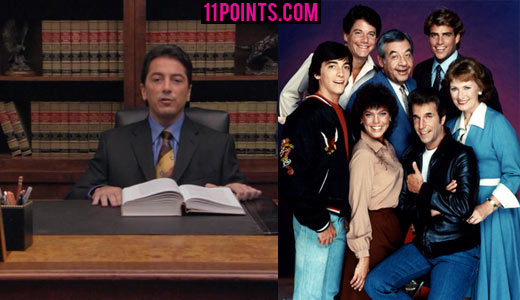 This was another subtle one I wouldn’t have noticed without getting a nudge in the right direction. Scott Baio plays the character Bob Loblaw, a lawyer who’s, in many ways, the antithesis of Winkler’s Barry Zuckerkorn. (Though not as much of an antithesis as Wayne Jarvis.)

When the Bluths fire Barry and hire Bob, Scott Baio says, “This isn’t the first time I’ve been brought in to replace Barry Zuckerkorn” — a reference to when he was cast as Chachi on Happy Days, ostensibly as a replacement “cool guy” for Winkler’s fading Fonz. I wasn’t just a baby when this happened, but I can tell you, even my big-headed, drooling self could’ve looked at that plan and seen it was ill-advised.

If only they’d had Baio say something about being the new boy in the neighborhood or living downstairs and it’s understood, it probably would’ve triggered my head turning bright red and steam shooting out of my ears like a cartoon character. 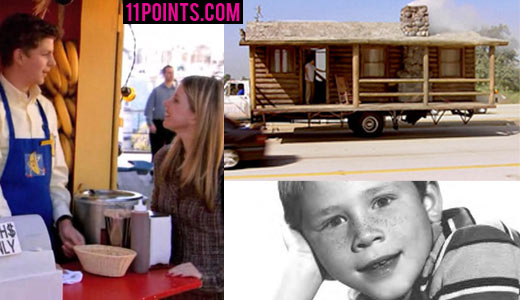 Ron Howard’s narration drives the show perfectly — the way they use narration to both advance the story AND simultaneously deliver jokes is groundbreaking. And while Henry Winkler gets most of the Happy Days references (though Howard does correct GOB for incorrectly saying “Donnie Host”)… Ron Howard gets the Andy Griffith references.

The first one is when Jessie, the publicist, calls George Michael “Opie”… and Howard gets angry in the narration and says she best watch her mouth. The second one happens after the Bluths try to hire Andy Griffith to be their fake lawyer but he leaves, offended that they presented him a log cabin as a trailer… and Howard clears up that “no one was making fun of Andy Griffith.” 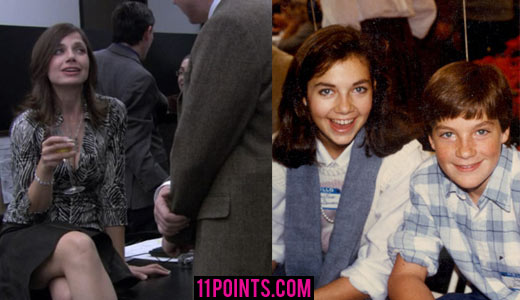 When they brought Justine Bateman in as Nellie, a prostitute who was potentially Michael’s sister, it cast a perfectly comedic, awkward shadow over the whole episode. Plus, with the show’s love of casual incest — they carried the cousins-in-love storyline for all three seasons — you never quite knew how far things were going to go before either Michael or Nellie put up the stop sign.

It’s probably at this point that any non-Arrested people reading this list stopped and said: “Wait… did you just say ‘the show’s love of casual incest’? THAT’S part of the so-called greatest sitcom ever?” Trust me, there’s no comedy like well-done incest comedy. 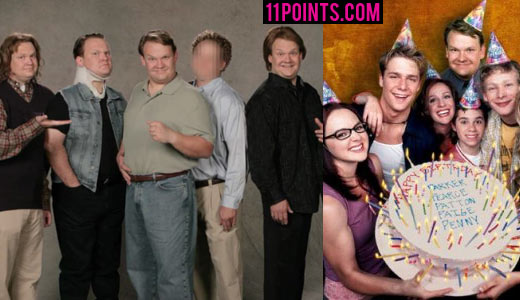 Andy Richter playing quintuplets was a reference to one of his Fox sitcoms, Quintuplets, that had been canceled a year earlier. Quintuplets was the 180-degree opposite of Arrested — laugh track, corny jokes, “sitcom” family problems, generic characters, zero comedy street cred. All it did was make you feel really bad for Andy Richter.

I didn’t love his quintuplets on Arrested — although I did like that the “cute” one was named Chareth — but I did like the show giving him that opportunity to exorcise the quintuplets demon that had clearly been haunting him. 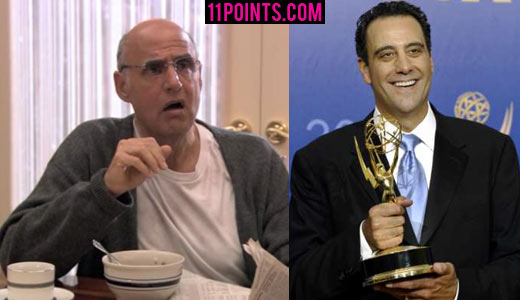 In 2005, Brad Garrett won the Emmy for Best Supporting Actor in a Comedy… beating out Jeffrey Tambor. So when Michael Bluth thought his father (Tambor) was lying convincingly, he compared the strong acting to Brad Garrett. It was a very cathartic moment for the fans who couldn’t believe an Everybody Loves Raymond actor got deemed to be funnier/stronger/better than an Arrested Development actor — and I’m guessing it was cathartic for Tambor, too. 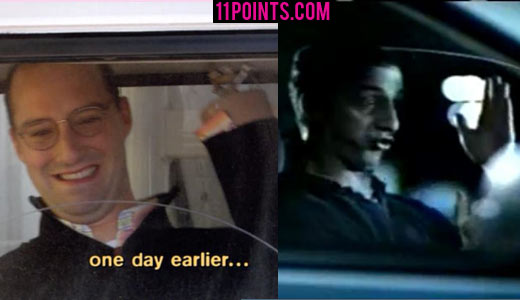 Turns out, before Tony Hale was Buster, he was in a semi-famous Volkswagen commercial where he danced to Styx’s Mr. Roboto in the car. (It’s one of those commercials that makes you say, “Oh, yeah, I think I might kinda remember that.”)

So when they had him doing the robot to Mr. Roboto on the show, it was a direct reference to that… just with a hook for a hand and some stairs for a car. (Buster’s hand situation [avoiding a spoiler there] stands as the most foreshadowed joke in the show — if you go back through and watch Arrested from the beginning, you’ll see they’re making references to Buster and hands from the very beginning. It’s stunning how much foresight it took. You watch it and truly believe the writers had a long-term, multi-season plan all along… in other words exactly the opposite of watching Lost.)