The first one is a billboard proclaiming Taco Bell as the best Mexican restaurant in the city. Extrapolate out from there.

I’ve done any number of celebrations of fast food on this website, which, I hope, now allows me to make jokes about other people who celebrate fast food more than I do. It’s sort of like the person who makes racial jokes after saying, “I have a black friend,” but less edgy and more self-aware.

Here’s a collection of photos and articles that show people taking their fast food (or, in a few cases, non-fast but certainly homogenous restaurant food) way, way too seriously. 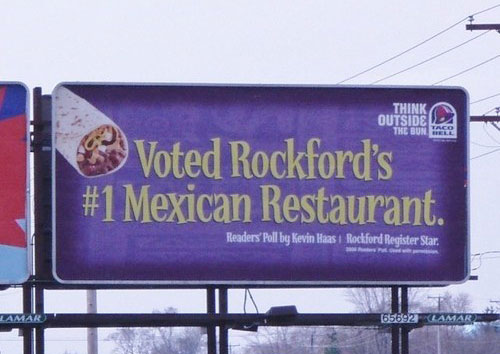 Oh man, the employees at Chi Chi’s are gonna be PISSED.

2 | Recruit passes on Clemson because of Chick-Fil-A 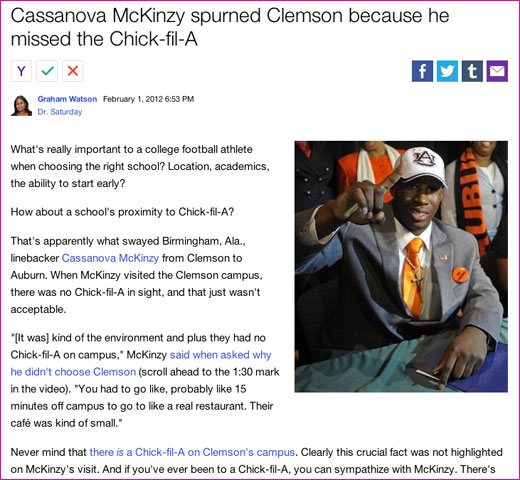 I think this story sums up everything that would be infuriating if you were a college football coach. You spend your entire life trying to seduce 17- and 18-year-olds to come to your school… and sometimes they ultimately make their decision on impetuous and seemingly random whims. The best part of this article is that this guy decided not to go to Clemson because there was no Chick-Fil-A on campus… but they DID have a Chick-Fil-A on campus, he just didn’t see it.

3 | More orange chicken and Sierra Mist for your discerning palate?

Rarely do fortune cookies prove themselves to be inaccurate with such immediacy. This is the most deceptive fortune since the one that said you’d find true love on Flag Day. 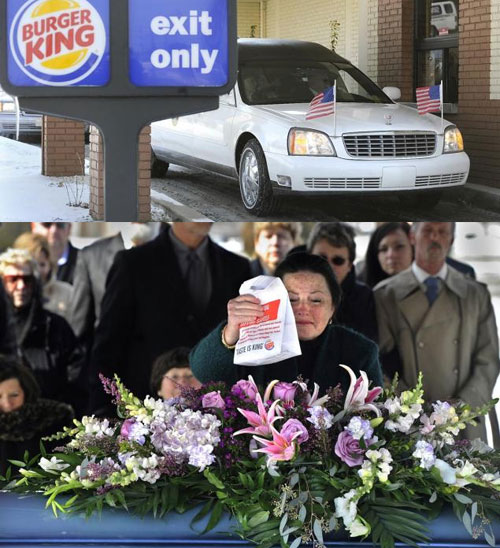 88-year-old David Kime Jr. of West York, Pennsylvania was such a big Burger King fan that, before he died, he asked his family to take his funeral procession through the BK drive-thru. And they did. One of his daughters (pictured above, laying Burger King on her father’s casket) said, “He always lived by his own rules. His version of eating healthy was lettuce on the Whopper Jr.” And he made it to age 88. Think about that over a kale salad with a side of fresh squeezed air. 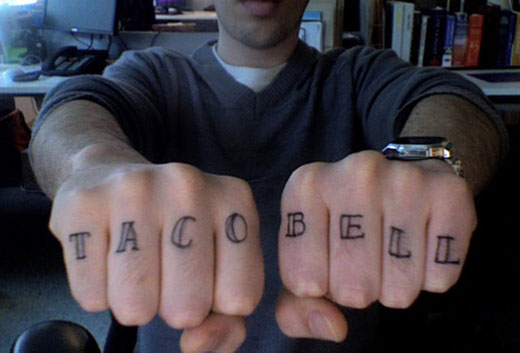 I like these knuckle tattoos so much better than “LOVE / HATE.” “Taco” and “Bell” really do a much better job summarizing the duality of man. 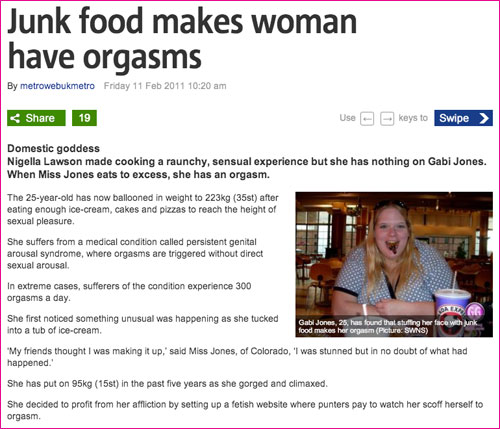 The American yellow press has grown exponentially in the past decade, but the British still have SUCH a head start that they always dig up these exclusives. This woman’s in Colorado and somehow the British tabloids got to her first. Anyway, that’s some fantastic product placement for Panda Express in the photo. I guess this woman is a connoisseur of food and drink, though, so it lines up. 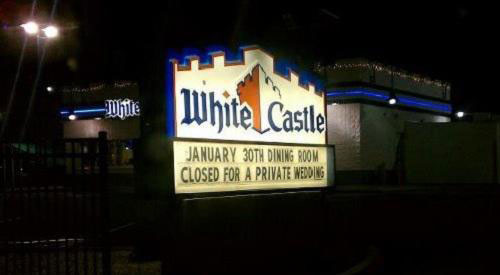 This is what happens when a lady makes like 17 wrong turns in life and her childhood dream of walking down the aisle in a white dress turns into walking down a White Castle aisle in a paper hat.

8 | The most important stop of any visit to Norway 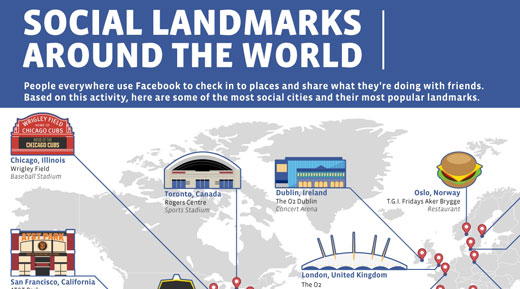 Last year, Facebook put together this map of the spot in 25 major world cities that got the most check-ins. It’s the expected mix of sports arenas, concert venues and tourist traps — except in Oslo, Norway. In Oslo, the most popular Facebook check-in spot was (and maybe still is)… a T.G.I. Friday’s. I’m not exactly sure of what’s so special about this particular Norwegian T.G.I. Friday’s, but I do know this: If I ever visit, after a long day of exploring the fjords, I’m certainly going to get some a mondo melon margarita and extreme pizza shooters. 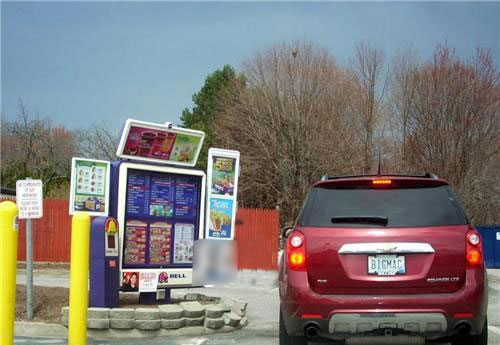 I appreciate the diversification here. Just because you’ve got a license plate endorsing McDonald’s doesn’t mean you can’t occasionally switch it up and have some faux-Mexican food. Sorry, Rockford! Please don’t shoot me. 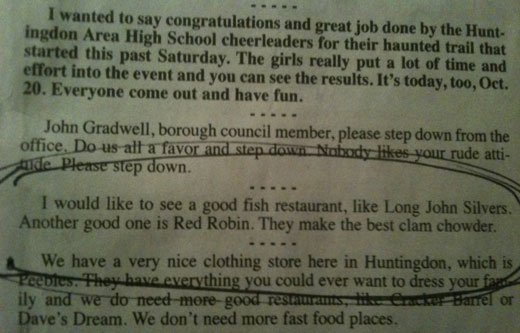 This impassioned, print media-based culinary debate emanates from Huntingdon, Pennsylvania. I looked it up and there are already three Long John Silver’s and two Cracker Barrels within 25 miles of Huntingdon, so this almost seems greedy. Red Robin is a bit further, nearly 60 miles away. But maybe that will encourage this guy (it’s got to be a guy, right?) NOT to go to Red Robin for their seafood. Come on.

11 | Cheesecake Factory: Come for the Pan-Asian food, stay for the Oreo cheesecake 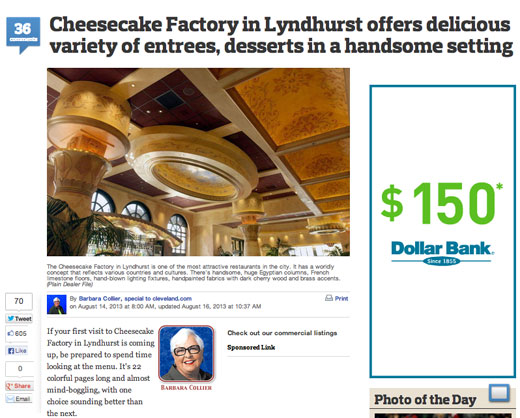 This review comes from the Cheesecake Factory mere miles from where I grew up (although it wasn’t there during those years). And boy, was Barbara Collier of the Sun News proud such a unique, diverse restaurant finally arrived in town…

[B]e prepared to spend time looking at the menu. It’s 22 colorful pages long and almost mind-boggling, with one choice sounding better than the next…

It is one of the most attractive restaurants in the city. It has a worldly concept that reflects various countries and cultures…

Looking for family comfort food, we opted for famous factory meatloaf ($14.95) and were happy with the choice. The well seasoned specially ground beef mixture, was tasty, tender and moist…

There are at least 30 cheesecake choices available daily… Sinfully delicious.

Her genuine enthusiasm is almost worth the trade-off of making Cleveland — one of the 30 largest metropolitan areas in the country — look like a podunk town with a mayor who’s also the general store owner and possibly a large chicken disguised as a human. Almost.