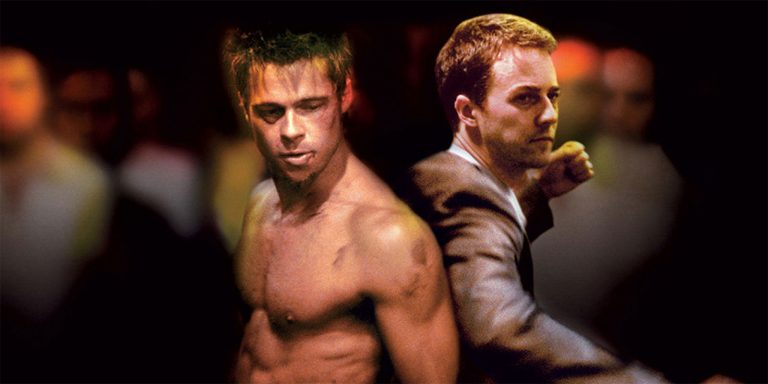 There are lots of little subtle secrets in the background of Fight Club, and I found ’em.

Fight Club came out 10 years ago next month. I re-watched it this weekend and, like the great film that it is, it still holds up. It’s as relevant today as it was a decade ago.

Yes, society’s consciousness toward terrorism is different (and if the movie came out today, they’d probably go a different direction than having Project Mayhem blow up a bunch of financial buildings at the end). But the messages, the visuals, the story, the art of Fight Club — all still perfect.

Another great part about re-watching it: The movie has so many subtle secrets going on in the background (most of which super-subtly foreshadow the huge twist) — secrets you’d never pick up your first time through but notice more and more with every subsequent viewing.

I went through Fight Club and picked out freeze frames of 11 of the best hidden secrets in the movie. Enjoy. (And warning: This list wouldn’t be possible without spoilers, and I’m going to let them fly. The movie came out in October of ’99. You’ve had time to watch it.) 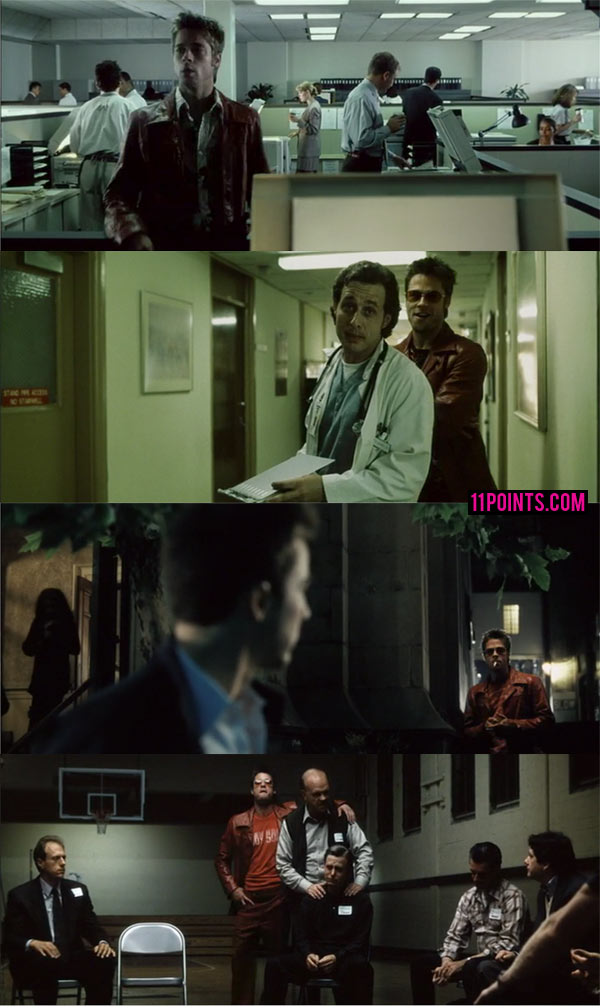 Before Tyler officially enters the Narrator’s life when they’re sitting together on the plane, he appears six times in the film. Once he’s riding a moving walkway at the airport (that appearance isn’t included on this list, since it’s not hidden).

Four of those times, Tyler appears as a subliminal flash that occurs when the Narrator has a moment of frustration or anger during his insomnia daze. These, of course, create the foundation for Tyler.

Below are screen grabs of all four one-frame Tyler Durden appearances — once when the Narrator is mindlessly making copies… once when he’s leaving his doctor… once when he sees Marla leaving a therapy session… and once during his testicular cancer support group.

Say what you will about Brad Pitt but he really looks like he’s having fun in this movie. Sure, his shirtless scenes in Fight Club launched a thousand male eating disorders (both manorexia AND [if I may coin a new phrase] boylemia)… but seeing how gleeful he looks, even in one-second freeze frames, makes it hard to be mad at him.

The fifth time Tyler appears? When the Narrator is in the middle of his early traveling montage and he’s watching TV in his hotel room. A group of waiters on screen all say “Welcome.” If you look carefully, Brad Pitt is in the front row of waiters, on the far right.

It’s the little touches like this one that take Fight Club into the legendary territory. You know what else helps? Meat Loaf. He’s amazing in this movie as Robert “Bob” Paulson. I wrote this entire list while listening to Paradise By The Dashboard Light. The writing portion took me just over 90 minutes. I only had to restart the song twice.

This is a quick, subtle hint early on that Tyler isn’t real. When the Narrator’s condo blows up, he calls Tyler from a payphone, with no answer. Then, a few seconds later, the phone rings. As the Narrator goes to answer it, the camera zooms in on some text on the payphone that reads, “No incoming calls accepted.” In other words — Tyler could not have called him back, because this phone cannot ring.

I am Jack’s inability to use a pager. 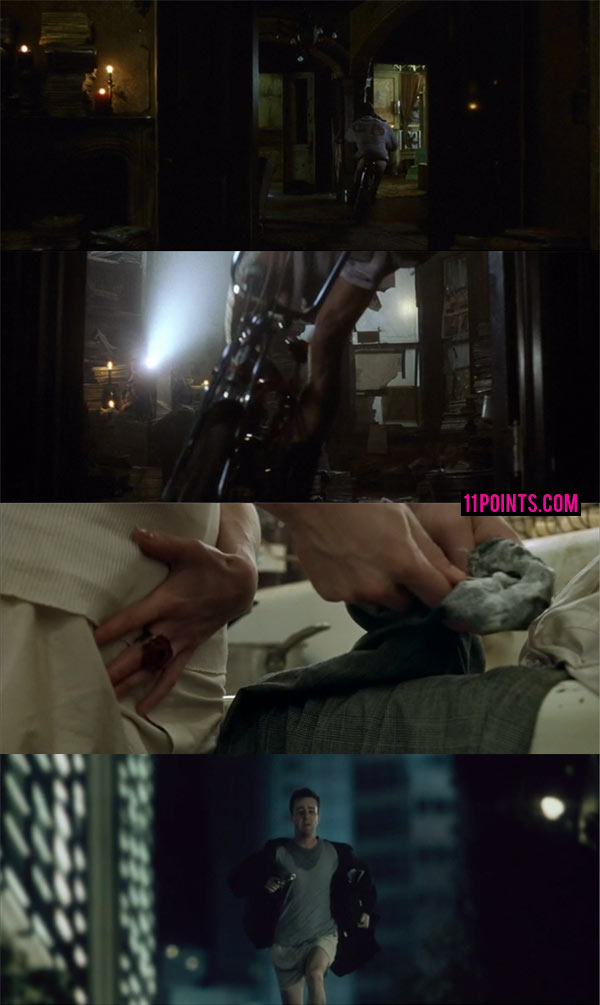 During the course of the movie, Tyler and the Narrator intentionally dress in opposite ways — Tyler is flamboyant, the Narrator is corporate and buttoned-down. The only place they’re identical: Their boxers.

When the Narrator is ordering IKEA furniture at the beginning of the movie, he’s in plaid boxers. As soon as he moves into Tyler’s house, he begins wearing white boxers… the same exact ones Tyler wears as he bikes around the house.

Below are two screen grabs I took of Tyler in the boxers, plus two of the Narrator at very different points in the movie — once when he’s with Marla, and once near the end when he’s running away from the police.

This was a little inside joke of production design. When the Narrator is sending Marla out of town, there’s a marquee in the background for the movie Seven Years in Tibet. A movie that starred Brad Pitt.

According to interviews with director David Fincher, further in the background there are also movie marquees for Wings of the Dove and The People Vs. Larry Flint, movies that starred Helena Bonham Carter and Ed Norton, respectively. But, as he told Entertainment Weekly, “unfortunately, the bus blocks the other marquees,” so no one’s ever seen them. 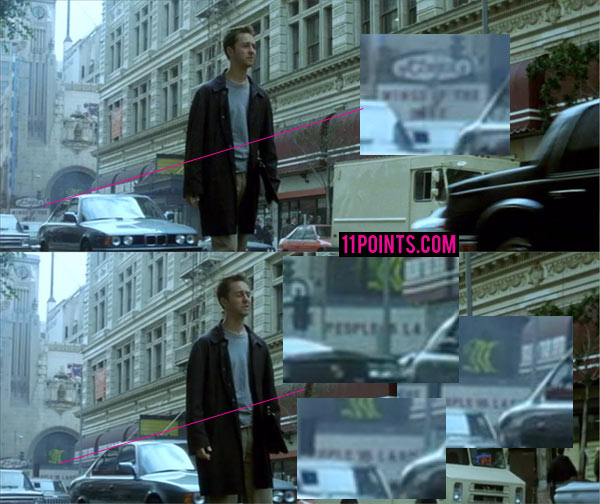 WAIT A MINUTE! We’ve got an 11 Points exclusive! As I combed through the movie, I looked deep in the background… and SAW those marquees that David Fincher never saw. I searched online and couldn’t find anyone else who’d ever taken these screen grabs. So, the journalist in me wants to say that I’ve uncovered the marquees from Carter and Norton’s movies for the first time ever.

May not be true, but I’m going with it. It’s the finest piece of investigative journalism I’ve done since this video where I discovered that a young Kevin Federline once sent a high score in to be published in the official Nintendo Fun Club magazine. 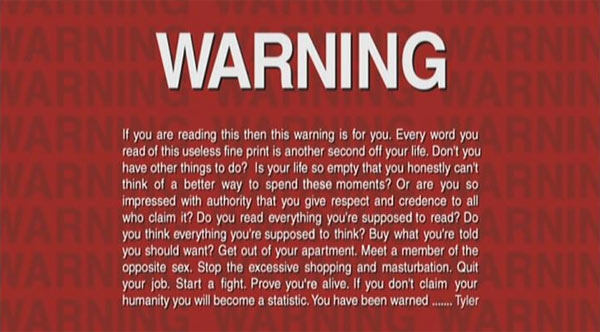 Very clever feature on the DVD here. After the requisite FBI warning at the beginning of the movie, the screen briefly changes to a warning from… Tyler Durden.

And yes, I completely see the irony that I spent a good five hours watching this movie, pulling screen grabs, Photoshopping them together and writing this list… something outright condemned by this message. So please don’t point it out. 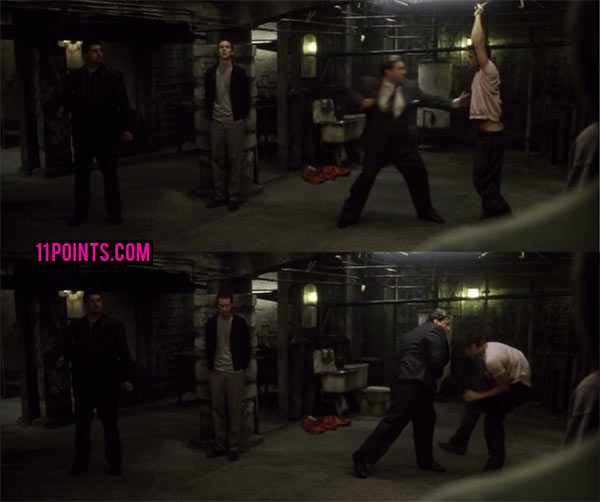 This is extremely, extremely subtle. But when Tyler is fighting the owner of the bar, when Tyler gets punched in the stomach the Narrator ever-so-slightly doubles over and winces in pain.

It’s one of the only times you ever see him visually react to what happens to Tyler. I guess it would be too over-the-top if all of a sudden his face became all bloody here. 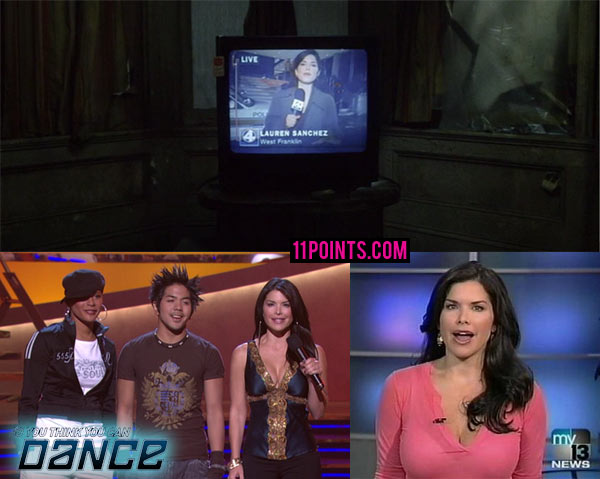 I was caught off-guard when the Project Mayhem guys are watching a news report about them vandalizing a building and the reporter is Lauren Sanchez. I was surprised for two reasons: (1) She’s a real reporter here in L.A. and (2) She was also the host of the first season of So You Think You Can Dance (until she got pregnant, was replaced by Cat Deeley for season two, and was then never invited back).

OK, so maybe this isn’t a hidden secret that David Fincher put into Fight Club, but it definitely captivated me. And if this is your first time here and you’re thinking, “Did this guy really just say a hidden secret of Fight Club is that it features a cameo from the Brian Dunkelman of So You Think You Can Dance???”… then allow me to say, welcome to 11 Points. 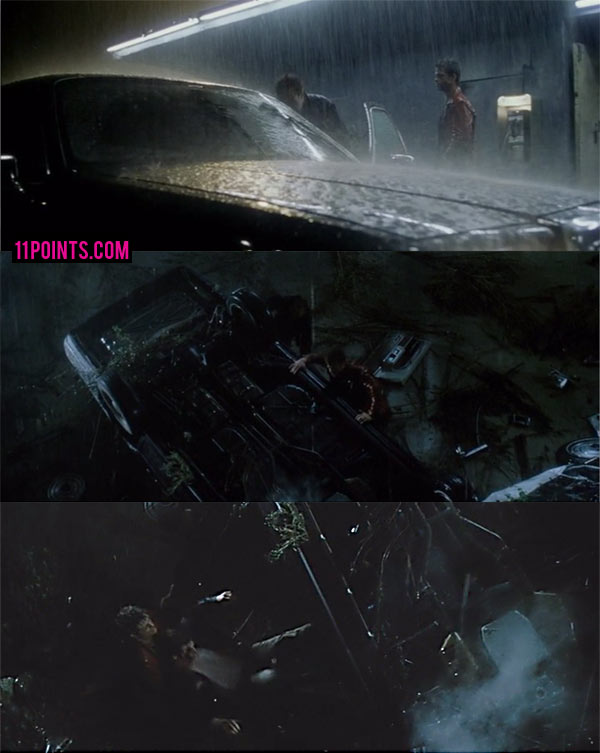 I have a lot of beef with the car crash… I know they explain on the DVD commentary how a figment of your imagination can drive a car into a ditch… but it’s always felt a little too forced to me.

(It’s almost too much of a fake out. We’re willing to believe the Narrator beat himself up in those first few fights, that he chemical burned his own hand, that he went around the country setting up fight clubs. But that he could have that argument with himself while driving a car off a road? It’s just one leap too far.)

Anyway, in the scene, here are two hints that Tyler doesn’t really exist. When the car pulls up, the Narrator gets in the driver’s door, and Tyler follows through the same door. But when the car crashes and flips over, Tyler gets out of the passenger side… and pulls the Narrator out of the driver’s side. Because the car’s flipped it’s hard to figure that out… damn near impossible in the moment.

And finally, one of the most famous scenes in the movie is where Tyler and the Narrator talk about secretly splicing one frame of graphic pornography into movies. The goal: Have it enter an audience member’s subconscious and make him or her feel unsettled for reasons they can’t quite believe.

At the very end of the movie, for one frame… Fincher spliced in a penis. Here it is, in all of its glory. (With my censorship touch, of course. Sorry. I got corporations to please.)