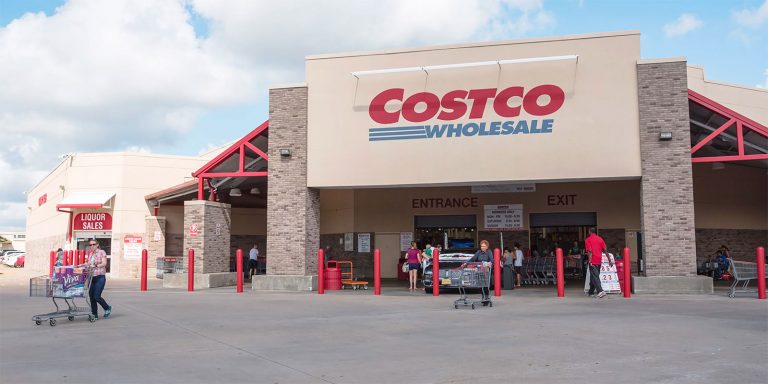 I spend a Costco trip wandering around taking pictures of things that strike me as Simpsons references.

Recently, my girlfriend dragged me to Costco. For whatever reason (it’s self-psychoanalysis I don’t want to do), I don’t feel at comfortable warehouse stores. So rather than dote around behind her, I decided to venture off on my own and find hidden Simpsons references.

This list is extraordinarily esoteric, even for this website, so if you aren’t a Simpsons encyclopedia it probably won’t register. But since I tend to believe that many people who read this site ARE Simpsons nerds on par with me, we can all wallow in our own crapulence here (just like Mr. Burns free to take candy from a baby).

1 | The secret ingredient is.. 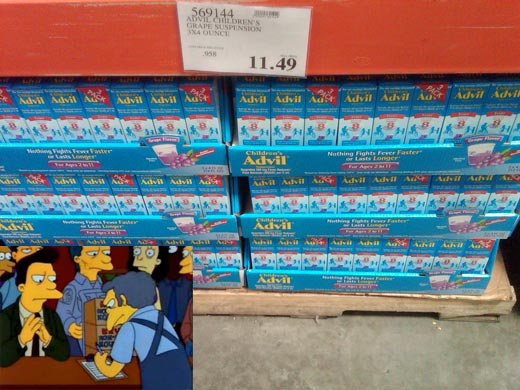 This is more than the 30 cases of children’s cough syrup than Moe had delivered to the bar. You could make a lifetime of Flaming Moes with this. 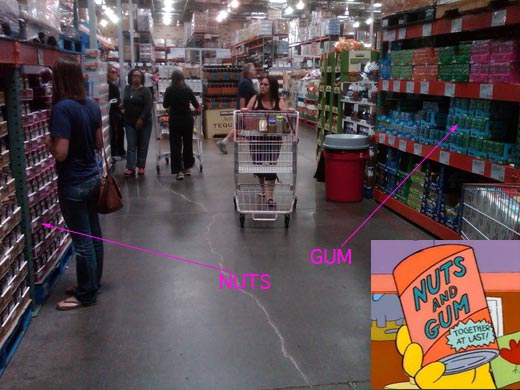 I couldn’t believe my luck. Taking Simpsons-oriented photos and here was an aisle with nuts on one side and gum on the other. It’s like they were just begging me to make this list. 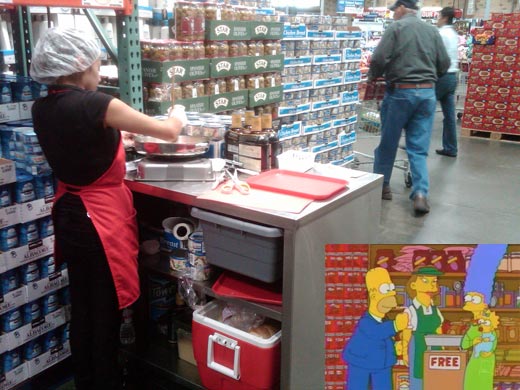 I asked the woman if she’d take a picture of me and her together holding up entire packages of food with toothpicks in them together. She gave me a blank stare. So I photographed her stealthily. Then I went ahead and stuck a toothpick in a six pack of printer ink. 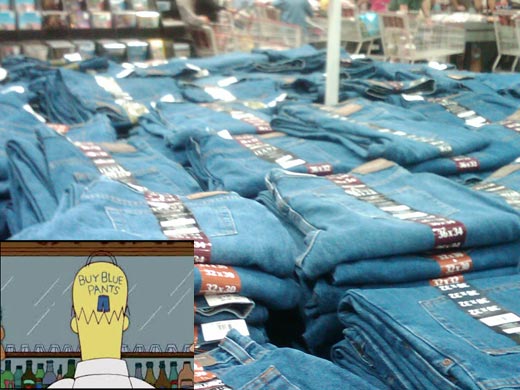 5 | Only Crichton and King 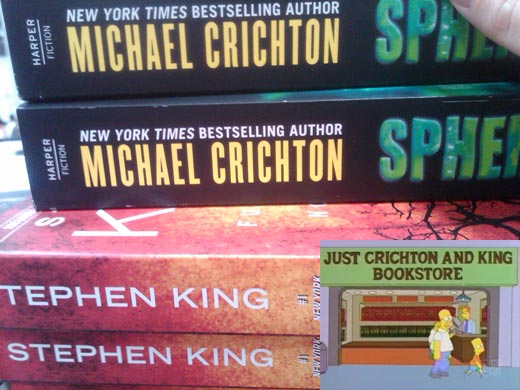 “Do you have anything by Robert Ludlum?” “Get out.”

(Also, side note, I would’ve totally skipped the Crichton/King photo if they’d had any books by Leon Uris. And also a section where they sold turtles.) 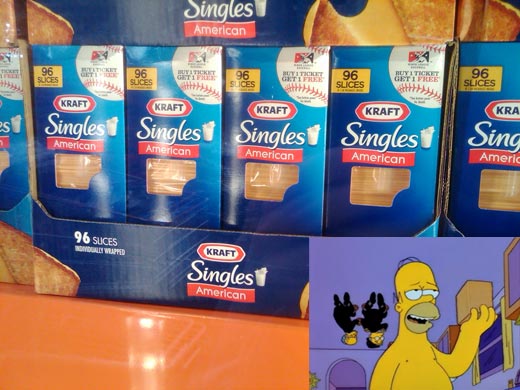 7 | The perfect side dish… for revenge 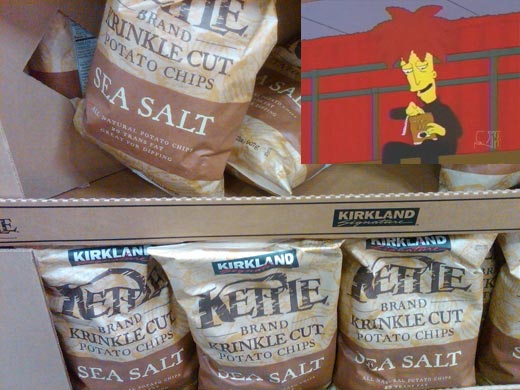 Even generic Kirkland brand Kettle Chips can be the perfect side dish for revenge.

8 | Fetch me my ranch dressing hose! 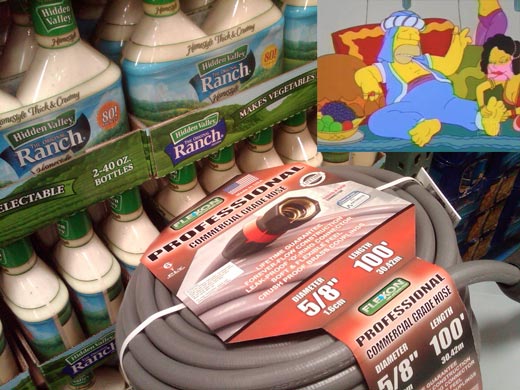 OK. So I brought this hose over to the ranch dressing section to set this photo up. Fortunately, Costco is full of so many people doing so many weird things that me balancing a hose on a garbage can to take a photo in front of a lifetime supply of ranch dressing didn’t even slightly move the needle.

(Also, I love that these are 40-ounce bottles of ranch dressing. If I’d known about these they totally would’ve made honorable mention in my list about drinking 40s.) 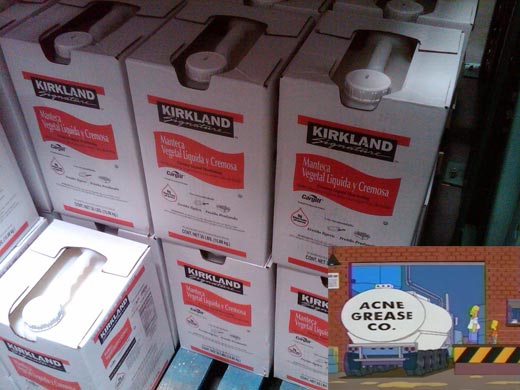 There was enough grease here for Willie to sell and move back to North Kilttown. Even if he was competing with the guys who run both the grease and shovel rackets. 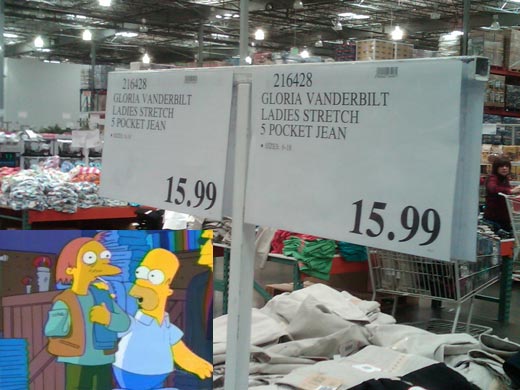 I think this may be the first time in my life I’ve ever actually seen Gloria Vanderbilt jeans. I was ecstatic. Unfortunately I did not see any jeans by Calvin Klein or Antonie Bugle Boy.

11 | No one was guarding the sugar pile 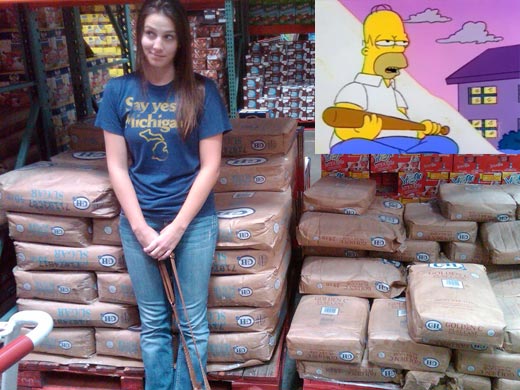 Since no one was guarding the sugar, I made my girlfriend take over and protect it. I don’t want any British aristocrats (or bees) coming over and stealing sugar when we let our guard down. As you can see, she was thrilled about the process. “If you’d just tell me why you’re taking pictures I’d be more into it,” she said. Then I told her. And it actually made her less into it. But then we shared a pallet of raspberries and everything was harmonious again.

And finally, last note. I spent a good 10 minutes looking for a Costco-sized donut display which would’ve been the equivalent of “all the donuts in the world” — and they didn’t have a single donut in the building. For shame.