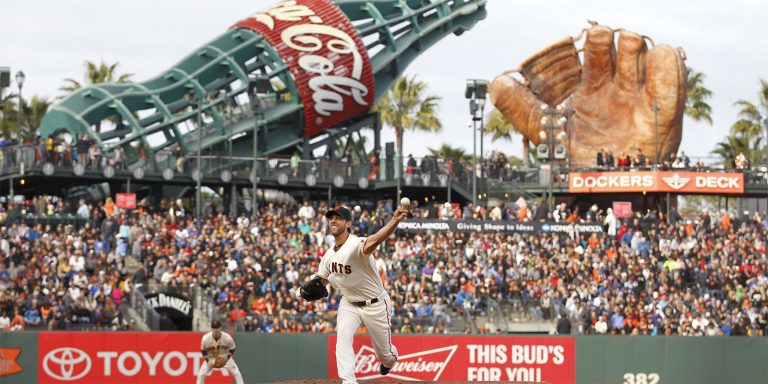 I went to the San Francisco Giants’ ballpark to make a video for work. Here’s what I learned about the place.

For work, earlier this week, my roommate/friend/coworker Paul and I got to go to AT&T Park, the home of the San Francisco Giants, to film some stuff for a behind-the-scenes video. You can see that video here.

Here are 11 interesting facts about the field, and about the Giants.

They loved him as a player there, went crazy when he set the home run record… but then they got rid of him because of his combo of steroid use and being a huge a-hole. So now they’re trying to figure out his place in history.The gift shop sells precious few Bonds things. Our tour guide mentioned him a few times, but not too much. And there are only small plaques here and there commemorating his record. So, I guess, don’t go to AT&T Park looking to see where all of Barry’s homers went or anything like that. Because they’re not that forthcoming.

There’s a statue of him in front. And his number, 24, is everywhere. The park’s address is 24 Willie Mays Plaza. There are 24 palm trees planted by the front gate. The right field wall is 24 feet high.So write it down, kids: When history is written, it’s better to be a nice guy than a roided-up a-hole with slightly better statistics.

There’s a see-through fence in center field facing out to the street. Sure, you’re 420+ feet away in center field but, hey, free is free. I do like that there’s a concession stand in the free area though — come on, if someone’s not willing to pay $18 for a ticket, what are the odds they’re willing to pay 50% of that for 16 ounces of Bud Light?

4 | Besides the Giants, AT&T Park was also home to… the San Francisco Demons of the XFL!

During the XFL’s one and only season in existence, the Demons played in the park. (Which was called SBC Park at the time.) According to Wikipedia, the Demos finished 6-6, including the playoffs, and had the highest average attendance in the league.

5 | The coolest feature of the park: The right field wall backs up to the San Francisco Bay

Home runs can go out of the park and into the water. But… I had no idea how infrequently that happened. Since the park opened in 2000, only 62 homers have hit the water. (35 by Bonds, but we don’t talk about those, right?) That means that a ball hits the water, on average, only once every 12 or 13 games.

Whenever ESPN would show a Bonds game, the entire McCovey Cove area behind right field would be shoulder-to-shoulder kayaks. During this random, regular season game between the Giants and Cubs, there were none. (For the video, Paul and I rented one and went out to the Cove before the game. It actually takes a decent rowing effort to fight the Bay current to get out there.)

7 | In left field, there’s a giant sculpture of a four-fingered glove, like the players wore through the 1920’s

The tour guide asked “Why four fingers?” Turns out that’s just how they made them back then, and players would jam two fingers into one of the slots. I speculated it was because, back then, players had to moonlight as coal miners so a lot of them were missing a finger. (That, or the sculptor was a huge Simpsons fan.)

8 | The park is earthquake proofed

AT&T Park is build so, if there’s an earthquake, there’s not a repeat of what happened during the ’89 World Series (when Candlestick got messed up). The ballpark is equipped with a bunch of earthquake plates to help it withstand anything the California fault lines can throw at it. So that way, if there’s an earthquake, the park won’t go down like [go ahead, insert your own joke about the Castro district here]!

Apparently, back during the mascot craze of the early 1980s, the Giants made an “anti-mascot” called the Crazy Crab. It was ugly, and the fans were encouraged to hate it. Unfortunately, they took that job too seriously, and enough people attacked the Crab that the guy inside the suit needed major back surgery. The mascot was discontinued after one year.There aren’t many mentions of the Crab around the ballpark, but there is one giant photo of him, so, I’m happy to say, his legacy lives on. I really want a stuffed animal version of him.

10 | AT&T Park doesn’t have a net covering the seats directly behind home plate, like most parks

Which is good for catching foul balls… but seems a little bit dangerous. My guess: It’s San Francisco’s way of proving that, no matter what middle America thinks, the people there are tough.

It’s got a retro look but a LOT of shtick (a Coca-Cola slide, a cable car in the park, the huge glove, water cannons over the right field wall). It’s built into the downtown area and everything looks very shiny and nice. And, naturally, it’s had three name changes in eight years. A complete modern ballpark, in every way.