An exclusive study to find the 11 cities with pro sports franchises that have had it too good. An interesting mix of America’s biggest cities, small cities and Raleigh for some reason.

Earlier this week, I posted the results of my study to find America’s most tortured sports cities. Today, we’re looking at the other end of things — the fans who have it TOO good. (Or, as you’ll see in some of the cases, cities more accurately fall into the “moderately fine without anything going particularly poorly” designation.)

I ranked the 41 U.S. metro areas with at least one current MLB, NFL, NBA or NHL franchise in five different categories:

(2) Years since last championship (or, for cities that have never won, years since the oldest current franchise was founded)

(4) World Series, Super Bowl/NFL Championship, NBA Finals and Stanley Cup Finals losses (since the only times I’ve ever cried after sporting events are after championship losses, I think it’s safe to say it’s worse to get there and lose than never get there at all)

(5) Franchises that have skipped town in the last 50 years

Here are the 11 least tortured sports cities in the U.S.

Horrific leg injuries to basketball superstars aside, Indianapolis basically rode its one Super Bowl win to this spot on the list. Also, weirdly, it’s helped by the fact that most the great Pacers teams of the past 20 years and the great Colts teams of the Manning era rarely ever made it to the NBA Finals or Super Bowl, respectively — which rarely gave them the chance to lose. The city only has one loss in each, so in a way, their spot on the “least tortured” list is partially thanks to the Patriots, Knicks and Heat.

It’s always refreshing when Detroit shows up on a “good” list because in basically it shows up like clockwork on the “bad” list in pretty much every city rankings (other than number of coney restaurants and juggalos per capita). The city has a very proud championship history — the fifth-most total championships of any city in the country. It’s also been on a decent little run over the past 14 years with one NBA title and two Stanley Cups — tied for the sixth-most titles since 2000. And Detroit hasn’t had a franchise leave town in the past 50 years (hacky “hit ’em while they’re down” jobs joke goes here).

New York has the most total championships of any city, with 58. They also have the largest population of any city, so it’s only 11th in titles per capita. New York isn’t higher on the list because it has the most championship losses of any city, at 62. Damn you, Brooklyn Dodgers and New York Giants — all these generations later, New Yorkers are still paying for your World Series losses.

Two of Tampa’s three teams won a title in the 2000s, although it’s been a decade since the most recent (the Lightning won the Stanley Cup in 2004). They city has just one championship loss (the poor Rays) and hasn’t had a franchise leave town. Now, granted, all of its titles are attributed to a fictional city called “Tampa Bay,” but much like winning cures a team’s chemistry issues, it also cures a city’s semantic issues.

Confession: I had no idea Raleigh had a pro sports team and when I was first making the list, I’d lumped the Carolina Hurricanes in with the Charlotte teams. The more you know. Anyway, Raleigh DOES its NHL team and it won the Stanley Cup eight years ago. With no major demerits on the resume, that’s enough to get the American pro sports powerhouse of Raleigh ranked this high.

No one would say Chicago’s a tortured sports city overall, although it does have the most tortured franchise with the Cubs (I didn’t run the numbers, but they definitely pass the eyeball test). However… Chicago is really only this high because of the recent success of the Blackhawks. Without their recent run, Chicago’s only title of the 2000s would be that one year the White Sox were randomly good. It’s been a long time since those B.J. Armstrong salad days.

Miami’s recent basketball success (which is now over, I say with a smug but completely unearned smile) obviously boosts this up. They’ve had one World Series and three NBA Championship wins since 2000 and their championship drought is only at one year. Miami’s also never lost a franchise, although the cold-blooded dismantling of the Marlins after the 1997 World Series should get partial credit.

We all assume Boston has had the best recent run of any city, and there’s a definite argument for it — eight championships since 2000 and at least one in all four sports. Somehow, that’s second in total titles since 2000 behind Los Angeles, which has nine. (Five Lakers, two Kings, one Ducks, one Angels.) L.A. didn’t crack the top 11 though — in fact, it’s closer to the bottom — thanks to a lot of finals losses and, ya know, football teams constantly skipping town.

The only reason Boston’s not on the very top of this list is because of its history of losses in championship games and series — five World Series, five NFL Championship/Super Bowl, four NBA finals, 13 Stanley Cup. That’s so many losses that they would’ve had to have six or seven of those go differently to move up even one spot on this list.

This is hard for me to type, but let’s give credit where it’s deserved. The second-most titles per capita. Three titles since 2000. Only three championship losses. No franchises leaving town. Pittsburgh’s placement also reveals an interesting quirk of analyzing a city’s teams as a collective — one or two successful franchises totally negate a really impotent one. The Pirates (until very, very recently) have had almost no success — but they also haven’t had a bunch of World Series failures in that time either. So the Pirates are basically zeroed out by the others which allows Pittsburgh to land in the top three.

The Packers winning the 2010 Super Bowl was a big boost to the ranking as well. Running the numbers, if they’d lost to the Steelers, they would drop to seventh on this list. The Steelers would jump to second but not number one, though, because there’s one city that’s just untouchable…

At this point, finally, every sports fan respects the Spurs. (Begrudging respect still counts as respect.) Five NBA titles overall (four since 2000) with only one NBA Finals loss — and currently a zero-year title drought. On top of that, the Spurs are so well-run they have the infrastructure to continue winning… well, forever. At least until NBA players decide having three superstars team up is cool, but having four superstars team up is even better — the “six-minute abs” approach, if you will. THEN we’ll see who’s laughing, San Antonio.

And here is the spreadsheet with rankings for all 41 cities: 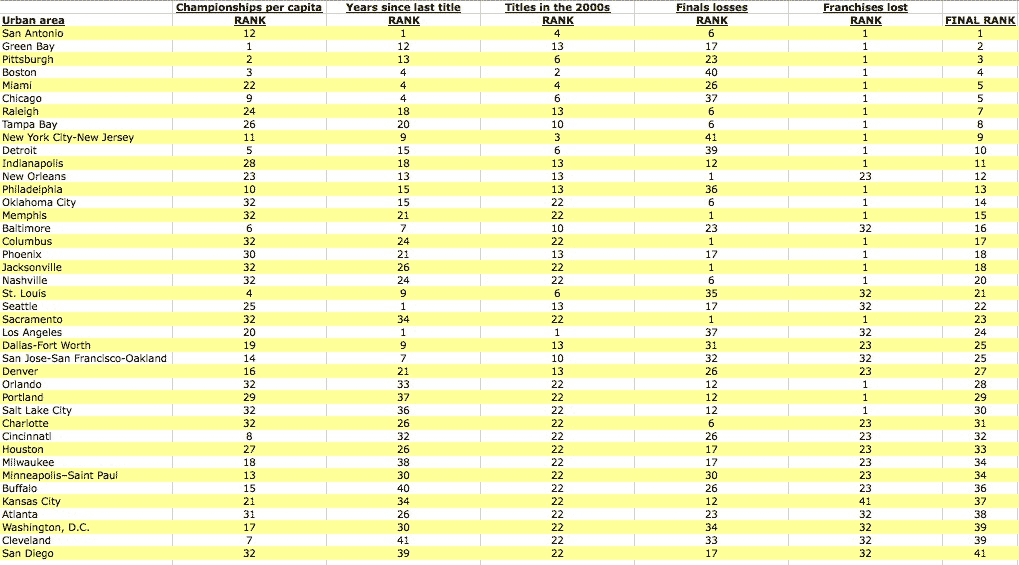