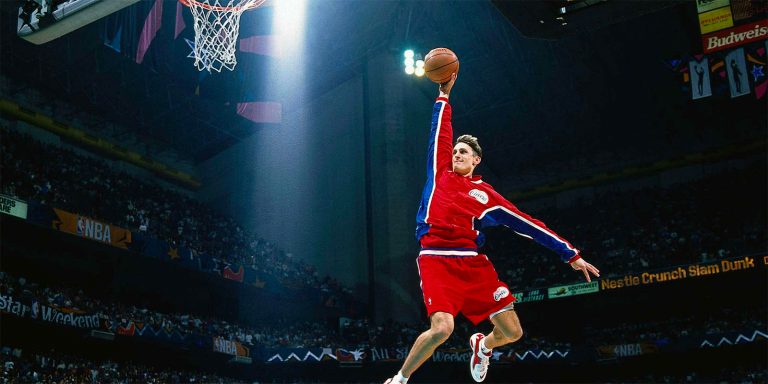 White guys aren’t exactly known for their dunking, but occasionally, they’ll throw one down that sticks.

I’ve always wanted to be able to dunk a basketball. I’m still not willing to say it’s never going to happen… but it’s probably never going to happen. I don’t have the height, the athletic/leaping ability, or those jump-enhancing shoes that have raised platforms on the toes they used to advertise in the back of Inside Sports. Also, I’m a white guy.

With the NBA nearly three-quarters through its Baseketball playoff marathon — and the media in daily screaming matches about whether LeBron is the greatest or worst player of all time depending on what happened the night before — I thought it would be a good time for a diversion into the fine art of white guys dunking.

Therefore, this list of 11 of the most memorable dunks in white guy history. A few quick preamble notes: Blake Griffin doesn’t count… nor does Mike Iuzzolino from NBA Jam… and the white guy has to be doing the dunking, not being dunked on, which takes out Frederick Weis.

11 | Adam Waddell on the dismount

I only give him about a 3.5 on the dunk… but he gets a solid 10.8 on the dismount. I would’ve given him the final two-tenths of a point if he’d gotten up, lifted up one leg like Kerri Strug and stuck his arms up in a true gymnast pose.

10 | Tyler Hansbrough dunks over a giant

Tyler Hansbrough is the epitome of the modern white dunker. If he played two decades ago, he’s just a tall, gawky white guy; but having grown up in the NBA Jam/And 1/”I Believe I Can Fly” era, he hides his innate tall gawkiness behind a thick layer of socialized swagger. In this clip, he dunks over 7-foot-9 Kenny George, possibly the tallest basketball player ever. (I say “possibly” because he might have been more like 7-foot-8 and those marketing gurus at UNC-Asheville decided to pump up his height a little bit to establish his legend.)

Previous generations of dunking white guys could never dunk over the Manute Bol, Shawn Bradley or Gheorghe Muresan types; Hansbrough represents the modern white guy by believing no obstacle was too massive.

Rex Chapman was a trailblazing white dunker… in that he was the only “cool” white dunker during the NBA’s late ’80s/early ’90s glory era. The dunk I picked (second in this video compilation) was from the 1990 dunk contest. And it’s Rex innovating the idea of the self-alley-oop and nailing a dunk that deserved more credit than it got.

(Warning: Watching this whole video will make you sad on what the dunk contest has become. The star power here is crazy — Scottie Pippen once dunked from the free throw line? No one’s relying on props or jumping over other people. It’s just good dunkers doing exciting, graceful, powerful dunks. And wearing compression shorts. I love compression shorts.)

I remember seeing an old video of Larry Bird dunking on a fast break by actually getting a boost off a defender’s leg. I couldn’t find that, so we’re going with this one. A bit of a history lesson here for those too young to remember: Larry Bird was NOT a dunker. There was once a Miller Lite commercial that mocked the unlikelihood of Bird dunking. So for a young Bird not just to dunk but to dunk ON someone, it means something. The greatest white basketball player ever needs to be represented on a list about white basketball players.

This video is Chris “Birdman” Anderson — jarringly void of tattoos or horrific criminal charges — setting a hard-to-watch record for futility in the dunk contest. It takes him 15 tries to land a dunk; this video is edited, but I actually remember watching this play out in excruciating real time. Ever been to a restaurant and sat next to an online dating couple on a first date? It’s more awkward and uncomfortable than that.

There was a brief period around when Shaq entered the NBA that backboards were rigged to shatter his power started shattering NBA backboards again. Not to be outdone, the NCAA had their own backboard shattering at a 1995 Final Four practice. Bryant “Big Country” Reeves had just led Oklahoma State on a surprising Final Four run… and in practice, he shattered one of the backboards at Seattle’s old Kingdome.

I remember watching this at the time but I didn’t remember just how un-hard he dunked the ball to make the backboard shatter. I also didn’t remember that he was the sixth overall pick in the draft a few months later. One pick behind Kevin Garnett and six ahead of Cherokee Parks.

Last year, Jacob Tucker, a 5-foot-11 white guy from a Division III school called Illinois College, made a YouTube video of himself dunking to try to get the NCAA to include him in their dunk contest. Amazingly, that worked. And even more amazing than that… he ended up winning that dunk contest. Deservedly. Also, it appears the NCAA dunk contest was sponsored by Denny’s love of bacon. Jacob is now on the Harlem Globetrotters.

This isn’t just a seminal moment in white guy dunking, it’s actually a seminal moment in dunking. This dunk by Tom Chambers over Mark Jackson is widely recognized as the first-ever posterizing dunk. Now… I’m sure plenty of players dunked over plenty of other players before this. But this gets credit as the first time someone dunked over someone else and humiliation ensued. Did Tom Chambers being white have something to do with the memorableness (and humiliation)? Definitely. This was the first posterizing dunk in the same way that Columbus discovered America or Vanilla Ice brought rap into the mainstream.

Look… we all know Brent Barry won this dunk contest because his dunks were the least bad — not the best. He won during the era when the dunk contest was on the decline (two years later the NBA would actually temporarily shelve it). He kept his baggy warm-up jacket on, did the same old free throw line dunk we’d seen a dozen times before, and, if this were bowling, he would’ve foot faulted. But none of that is at issue here. He won. And a white guy winning one of the worst NBA dunk contests ever still counts as a white guy winning the NBA dunk contest.

American Beauty still won the Oscar for Best Picture even though it beat one of the weakest fields ever. (Although I thought the Cider House RULED.) Ronald Reagan still won the presidential election even though he beat Walter Mondale. Barney’s movie won the Springfield Film Festival even though it only beat Football In the Groin. A win is a win. And Brent Barry remains the one and only white guy to do the impossible and win.

1 | Woody Harrelson finally does it

This fictional moment arguably did more for white basketball players’ credibility than a combination of Larry Bird, Christian Laettner, and the Gatorade commercial that revised history to make Craig Ehlo into a hero. Not only was Billy Hoyle a sublime player, but when he needed it most — against the King and Duck! THE KING AND DUCK! — he learned he had the ability to dunk inside of him all along. White Men Can’t Jump is the Wizard of Oz of white dunking.

The 11 Current NBA Players Who Have Never Dunked