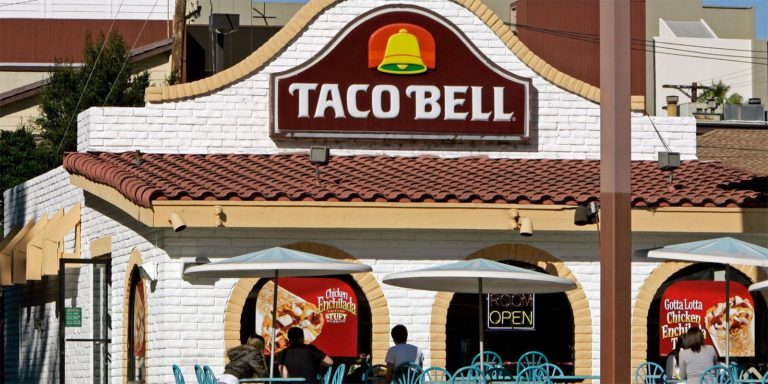 Some hidden gems about America’s most beloved faux-Mexican restaurant chain.

Taco Bell is a fascinating place. Obviously. Lets dig deeper into it than anyone ever has before…

1 | The Taco Bell Chihuahua was a failure

One of Taco Bell’s most famous advertising campaigns ever… quite possibly their single most famous one… was the Taco Bell Chihuahua. He’d say “Yo quiero Taco Bell” and people loved him.

Well… they loved him enough to quote him… but NOT enough to actually go to Taco Bell. During the Chihuahua era, 1997 to 2000, Taco Bell sales slipped.

Finally, in 2000, Taco Bell decided they needed to send the Chihuahua to doggy heaven (as opposed to doggy hell, where you find Hitler’s dog, Nixon’s dog and one of the Lassies)… and go back to marketing to the one demographic that keeps the chain alive: Young, kinda stupid men.

I got this fact after having a discussion with a friend, who worked as an executive at Taco Bell for a few years. You know how their ads used to use the slogan “Think outside the bun”? Well… that sentence actually found its way into their exec-level corporate-speak.

The bosses would ask for innovative ideas by saying, with absolutely zero sense of irony, “Think outside the bun on this one.” It’s a good thing Taco Bell didn’t have a tagline about paradigms or synergy, or the executives’ entire jargon roster would’ve been co-opted.

Anyone who’s a fan of Demolition Man… and I’d venture to say that’s a big Venn diagram overlap with fans of this website… remembers the gratuitous Taco Bell product placement in that movie.
For those who don’t, in Demolition Man, Sylvester Stallone and Sandra Bullock discuss how, in the post-apocalyptic future, only one fast food chain has survived the “fast food wars”: Taco Bell.

It’s not clear how much T-Bell paid for that kind of shout-out… but it’s got to be pretty significant.

BUT… in the European versions of the film, Taco Bell didn’t get that shout out. It went to Pizza Hut instead. (At the time both Pizza Hut and Taco Bell were owned by PepsiCo.) It’s probably because there weren’t any Taco Bells in Europe.

4 | Taco Bell is trying to succeed… in Mexico

Back in the early ’90s, Taco Bell tried to expand to Mexico. And it got laughed out of the country.

They regrouped and, about a year ago, made a run back across the border. And in case you needed more proof that Taco Bell doesn’t serve authentic Mexican food, this is it: To succeed this time around, they’re marketing themselves in Mexico as an AMERICAN food restaurant.

They’re calling their tacos “tacostadas”, because calling them tacos would be insulting to authentic tacos… and to Mexican culture. And… they have fries and soft-serve ice cream on the menu.

The goal with all this: Make Taco Bell an elite brand that appeals to rich Mexicans who want to associate themselves with anything considered American.

About five or six years back, a comedian I used to work with a lot, Daniel, got a role in a national Taco Bell commercial. (It was the one where the guy sneaks onto a golf course.) He told his agent that, as part of the deal, he wanted free Taco Bell for life.

They agreed. So whenever he wants, he can call up and they’ll send him stacks of Taco Bucks. (More on those later in this column.)

Then, a few months ago, another friend of mine, Reggie, got yet another role in a national Taco Bell commercial. (The one where guys in a boardroom distract people with melts.) He didn’t know to ask for unlimited Taco Bell for life, so he did not receive this.

Therefore, I disseminate this first-hand information to let you know: Should you become an actor and should that lead you to a role in a national Taco Bell commercial… ask for free Bell for life. Please.

According to Taco Bell’s own website, they serve an average of 295 million pounds of ground beef every year.

So let’s do some math. The average beef steer yields approximately 570 pounds usable cuts (the rest of his 1,150 or so pounds are unusable parts like bone and organs).

I’m by NO means a vegetarian or trying to promote an anti-meat agenda… but doesn’t something feel a little unsettling about Taco Bell requiring half a million cows to die every year?

7 | Taco Bell changed its logo because of “Demolition Man”

Here’s one more on “Demolition Man”. When the movie came out in 1993 and prominently featured Taco Bell, it didn’t feature their traditional logo and colors (brown, plus a red/green/yellow rainbow)… it featured a pink and purple “future” logo.

Taco Bell took advantage of that to make the one and only logo color scheme change in their company history.
After “Demolition Man” is when Taco Bells started rolling out the new pink and purple logo. It’s not quite the same as the futuristic one… I mean, look at the space-age font and bar code-looking bell!… but I guess it’s the step in between the old logo and the future one.

There is one item on the Taco Bell that dwarfs all others in terms of unhealthiness. And it’s the one called a salad. The Fiesta Taco Salad has 840 calories and 45 grams of fat.

A solid 370 of those calories and 21 of those grams of fat come from the fried taco shell in which it’s served.

I never knew this. In the early 1960s, a guy named Glen Bell wanted to open a miniature golf course. But it fell through. So he opened a hamburger restaurant. But it didn’t do well.

But he kept Tin Cupping his entrepreneurial ventures and finally, in 1962, he opened a restaurant in Downey, California, called Taco Bell. And this idea worked.

Two years later he sold his first franchise and five years after that the company went public. In 1978, Pepsi bought the chain.

Two weekends ago, I was at my friend Noah’s wedding. [My roommate] Paul was also there, and, following our policy of not buying our friends terrible gifts off their registry, Paul had the idea to buy Noah $100 worth of Taco Bell Bucks.

Noah loves Taco Bell as much as or more than almost anyone else we know (I say almost because our friend Nathan loves it slightly more), so we agreed that this was a fantastic present.

Paul went to Taco Bell to buy the gift certificates… and was denied. They didn’t sell them. And this marked the third time in the past few months I’d heard of someone trying to get a Taco Bell gift certificate and being turned away.

So this made my list because either (1) Taco Bell has stopped selling Bucks in their restaurants, and the public should be alerted or (2) someone from Taco Bell corporate will find this list, realize their restaurants are running amok and not selling gift certificates like they’re supposed to, and crack some heads.

I’m from Cleveland, and I’m a Cavs fan. And I can tell you, if you talk to any fan at a home Cavs game and ask him what his priorities for the team are, he’ll say (2) do whatever it takes to make LeBron happy so he stays when his contract is up in a few years and, more importantly (1) will the Cavs to score over 100 points tonight so he can get a free chalupa.

See, a few years back, Taco Bell started a promotion in Cleveland (and, according to Wikipedia, in Portland as well) where, if the home team scores 100 or more points, everyone in the stands gets a coupon for a free chalupa at Taco Bell.

And for some reason… I have no idea why… people lose their freaking minds over this chalupa. If you ever watch a Cavs game, pay careful attention to the last few minutes. Whether the Cavs are up or down, if someone hits a shot to take them into triple-digits, the fans go INSANE.

It’s completely illogical to me. Chalupas cost like $2. NBA tickets cost like $40. That’s like paying to go to a Billy Joel concert, having a good time… but going NUTS at the end because of some promotion where, like, if he plays Scenes From an Italian Restaurant as the second encore you get a free air freshener from Bed, Bath and Beyond.

And yet the Cavs fans live and die for that chalupa. So thank you, Taco Bell, for completely scrambling the brains of the fan base. The city’s screwed up enough without you mindhumping us.