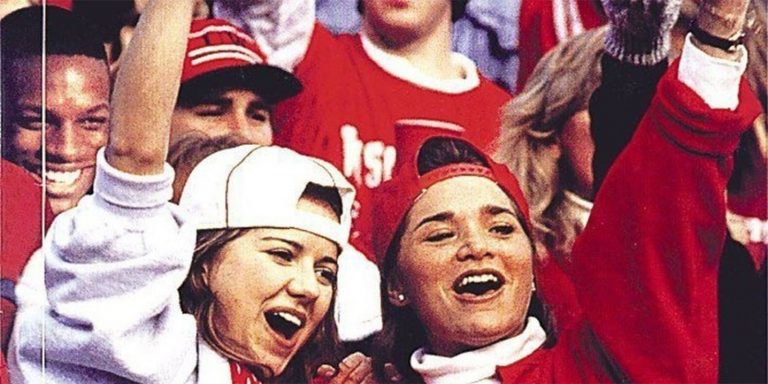 Ads and more where black people were clearly inserted or removed digitally.

For some reason, black people and white people still don’t seem to like taking photographs together.

Which makes it awfully difficult when a magazine, newspaper or brochure wants to demonstrate diversity.

I dug around the Internet for the best pictures I could find where a black person was either blatantly Photoshopped in or out. Here are the 11 funniest and most absurd ones I found. (Huge, preemptive dap goes out to the brilliant blog Photoshop Disasters, who pointed me to almost half of these.) 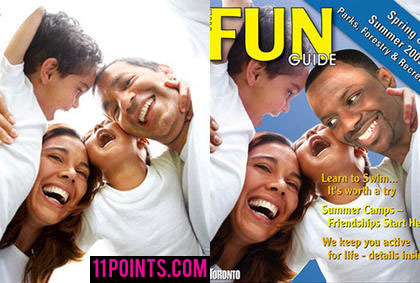 Our first entry is the most recent one… this comes from a summer fun guide that Toronto published last month. A spokesman said they “superimposed the African-Canadian person onto the family … [with] the goal to depict the diversity of Toronto.”

They made the change because of a new policy in Toronto where the city manager mandated the staff always try to represent the cultural mix of residents.

And, according to Kevin Sack, Toronto’s director of strategic communications, awkwardly plopping a miscellaneous black guy into a photo is sometimes an acceptable substitute for, ya know, actually having races mingle. Sack told reporters, “The policy doesn’t say Photoshop, the policy says ‘show diversity’ … [but] when you’re publishing something with deadlines and you don’t have the right photo, the objective is to communicate the service.” 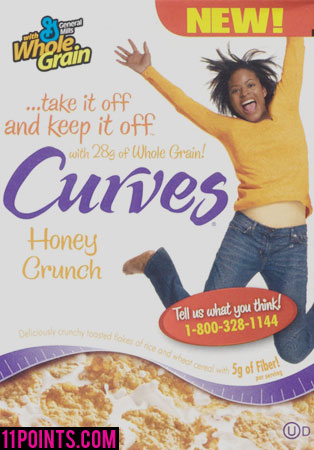 If you’re an overweight black woman, listen up: Not only does Curves cereal help you lose your belly… it turns it white! (And belly button-less, like Kyle XY.)

This one’s brilliant. In 2006, Kimberly Williamson Butler, was a mayoral candidate in New Orleans. And she wanted a photo of herself standing in the city for her website. Instead of going out to actually take said picture, she had her staff Photoshop one together.

Only problem: They accidentally Photoshopped her into New Orleans Square in Disneyland.

You can even see the Disneyland garbage can in the background of the photo.

When the Internet caught word of Butler’s monumental blunder, they made a huge deal so her staff responded by… leaving the photo up on her website, but Photoshopping out that garbage can.

Needless to say, Butler only got one percent of the vote in the primary, which wasn’t surprising… the Disneyland photo aside, she was pretty much done from the start when she announced her candidacy just after turning herself in on a contempt of court arrest warrant.

4 | Photoshopped diversity at at University of Texas, Arlington

I’m not sure what makes it clearer that the black girl was Photoshopped in at the last second — the completely incorrect light and shadow on her face… or the fact that the person doing the Photoshop failed to get rid of the black background on her right arm and left shoulder AND some of the tan background behind her hair.

Either way, they picked an awful photo to insert her into. The other girls look like best friends, and she’s not their Lisa Turtle. At best she’s portrayed as their Lando Calrissian.

5 | The mystery of the black Olympic hand 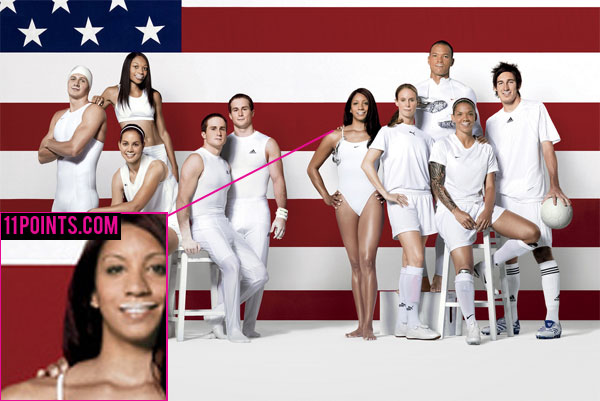 I don’t know who owns those three mysterious black fingers on Olympic swimmer Maritza Correia’s shoulder. All I know is that he most certainly did not get milk.

6 | The white ghost in the machine 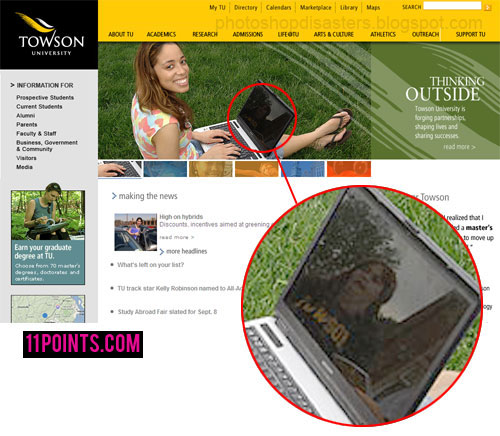 One of two things happened with this photo. Either the black girl was Photoshopped in with this laptop on the Towson University campus… or there’s a ghostly white girl in the machine who’s haunting her. And quite frankly, both options are equally likely.

7 | One black guy on the boat is enough 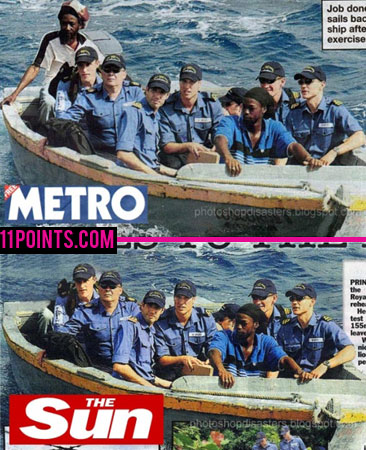 This is from last year. Prince William, as part of his duty in the Royal Navy, was in the Caribbean practicing hurricane rescue drills. One British newspaper (The Sun) ran a photo of the staged rescue… and decided to edit out one of the black locals from the boat.

And they might have gotten away with it (although the Photoshop job is horrible, leaving the shadow and the knee in there)… but their rival, The Metro, ran the picture unedited. 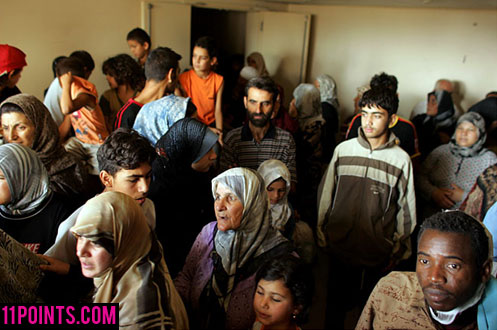 In the summer of 2006, this photo ran in the New York Times and is a very important lesson about photojournalism. If you’re going to Photoshop a black guy into a Lebanese refugee camp for one of the world’s most respected newspapers, at least take the time to really smooth out the edges around his head. 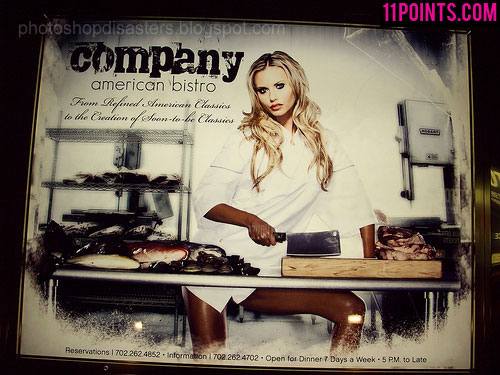 I’m sure, at some point, after this went to print, some executive (at the Luxor, where this restaurant is) said, “Oh shit, we forgot to also change the color of the girl’s arms and legs.” And another responded, “Well, maybe people will just think it’s a shadow.”

And even though shadow doesn’t work that way, I still support their Photoshopping decision. If I’m going to have a model cleaving off fish heads, I want her to be as white and blond as possible. 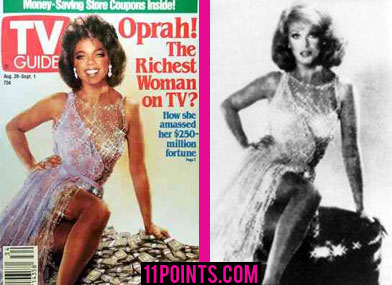 And it is. Turns out TV Guide crudely put Oprah’s head on Ann-Margret’s body. (The pile of cash is more proportional. Arguably more offensive.)

11 | Photoshopped diversity at the University of Wisconsin, Madison 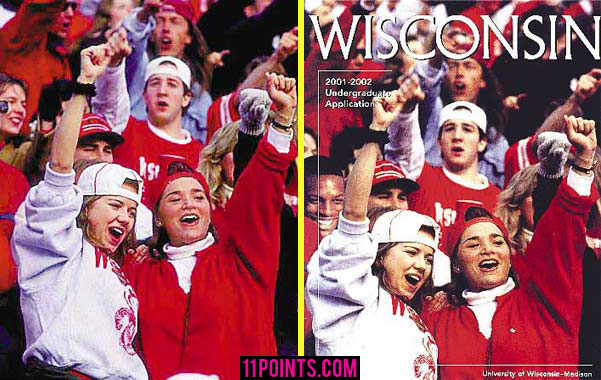 I’m just surprised they didn’t try to Photoshop a black person’s head over the girl in the white sweatshirt… she’s already making the black power salute, no one would’ve suspected a thing.