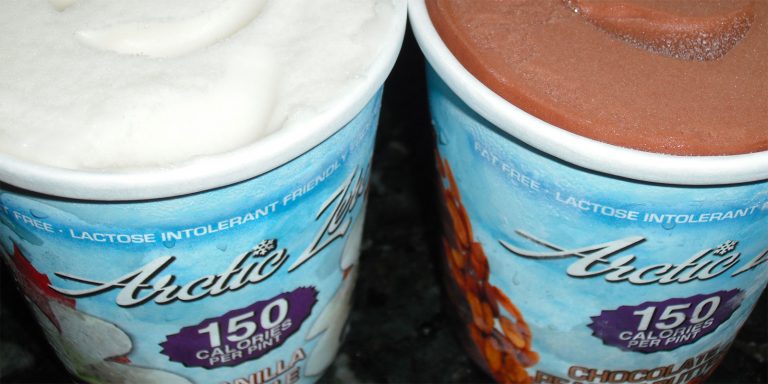 I try the faux ice cream Arctic Zero that only has 150 calories in a pint. It’s… interesting. 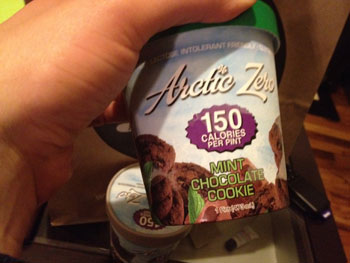 I learned about it yesterday afternoon. Here is a chronological rundown of my adventure. 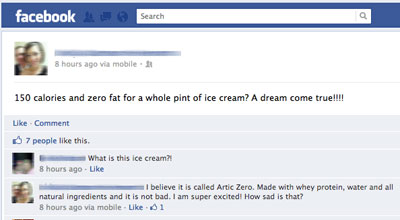 A girl from my high school who I haven’t talked in at least 15 years posts a Facebook status update: “150 calories and zero fat for a whole pint of ice cream? A dream come true!!!!” Had there only been 1-3 exclamation points, perhaps it wouldn’t have drawn my eye in the news feed. But four exclamation points? I stopped everything. She would go on to say it’s called Arctic Zero. (Well, technically, she wrote “Artic Zero.” But I could see (or, “c,” if you want to hit a Rosie O’Donnell-level pun) what she was talking about. I decide this is intriguing enough to try.

Forgetting it’s 4/20 Eve, I head to Whole Foods to buy some Arctic Zero. It’s crazy there. Seriously, going to Whole Foods the night before Marijuana Day is like going to Target on Christmas Eve or a moderately-priced brunch buffet on Mother’s Day. Still, I manage to eat a free sample of kimchi without having to have a long discussion with the earthy middle-aged woman manning the station. I grab two pints of Arctic Zero — cookies and cream and mint chocolate chip — and make my way into the express lane behind a reasonable 30 or so people. I get out of there for just under $10, for which I should win a free t-shirt as the most frugal Whole Foods customer of the week. 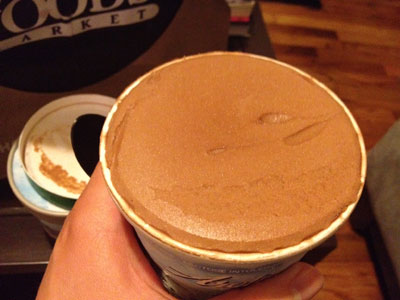 I opt to begin with mint chocolate chip. I pry open the pint and find a thick, rock-solid wall of brown. Approximately the same color as a coffee with one thing of cream. Or Janet Jackson. I dig in with one of the 14 biodegradable spoons I took from the Whole Foods free biodegradable tablewear dispensers. Seriously, if you’re not too blatant about it, you can stock up on Whole Foods biodegradable cutlery forever. And I wonder why they feel the need to charge more than the other grocery stores.

It’s interesting, I’ll say that. I wouldn’t necessarily describe it as ice cream, and that’s apt, because it’s not real ice cream. It’s a mix of whey protein and natural sweeteners. If I had to sum up the flavor in one word, it would be “cold.” It tastes like cold.

I haven’t eaten many pints of ice cream in one sitting in my life. Possibly because I’m not a character in a Cathy cartoon. But, if I can recall, the times I have powered down inhuman quantities of ice cream, it hasn’t taken me that long. Not here. After about 10 minutes of eating, I’ve barely made a dent. Also, I’m noticing a strange phenomenon that every surface of the Arctic Zero looks like it has freezer burn. Something about the texture gives it that look at all times. This could benefit so very much from a handful of chocolate chips or some hot fudge. Even cold fudge. (11-second tangent: Why didn’t Judy Bloom ever market a line of Fudge Fudge? She had no eye toward brand expansion. Anyway, let’s move on.)

Another weird side effect of eating this slowly: The pint is too cold to hold. I find I’m having to put it on the table periodically. I suppose some people would’ve scooped the ice cream into a dish to avoid that but I’m not putting on airs. (Also, I’m about two-thirds through the pint and I can’t really eat any more. I’m switching flavors.) 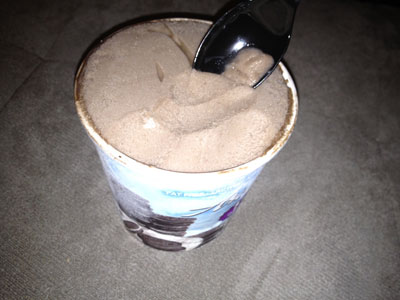 I’ve switched to the cookies and cream. It’s a much different color, I guess I’d describe it as gray-brown. It looks like the color of a tenement building in formerly communist eastern European country. But it still has that freezer burn look. It also has a much more powerful taste than the mint chocolate chip. It’s stronger and sweeter. I don’t know that I’d call it cookies and cream, but it’s definitely not just the flavor of cold. It’s more like sweetened cold.

I think the taste test is over. I ate about one-third of the pint and I’m really, really, really full. While I haven’t eaten a pint of ice cream, I’ve eaten about a pint of *something* that’s sitting in my stomach. 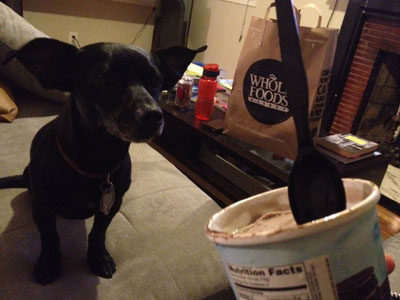 I give my dog Reggie a taste. Don’t worry about the whole “dogs can’t eat chocolate” thing. One, there can’t be more than a hint of chocolate in this. Two, it’s just a small taste. And three, Reggie’s a street dog with a stomach of steel. He was rescued from the streets of Compton where I think he must’ve survived on eating gravel, roadkill and floating bits of Dr. Dre’s nostalgia. He once found his way into a bag of chocolate covered cherries and ate them all and he was fine; another time he repeated that with Hershey’s kisses. Naturally, he loves the Arctic Zero and licks the spoon dry.

I wouldn’t recommend eating Arctic Zero if you’re on a date. Or if you’re going to be in close quarters with anyone afterward. Some strange things are happening in my body and, like Larry Burns and Homer Simpson in a movie theater, they are expressing themselves loudly. They don’t always stink, but they’re always very loud. Which is the same thing you’d say after going to a Hoobastank concert. 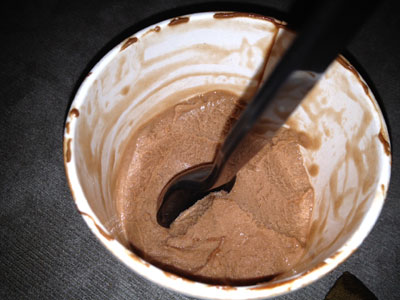 Yes, I stay up late. I’m still incredibly full. It’s been more than five hours since I finished eating and I couldn’t imagine eating again. So let’s add that to the unexpected side effects list of Arctic Zero — eating a pint of it really fills you up for a long, long time. Very cold, slow to eat, loud gas, total satiety, dogs love it. Think they’ll put that on their marketing stuff?

No, I don’t sleep that much. I’ve had some time to reflect on my night with Arctic Zero and here’s my thought. It’s not going to take the place of dessert. It’s just not quite delicious enough. It didn’t have that effect of satisfaction that dessert has on my (addict’s) brain. It reminded me of chewing sugar-free gum in lieu of eating dessert — it’s an effective but ultimately less satisfying substitute. It’s 150 calories and 24 grams of carbs — I’d rather get a McDonald’s vanilla cone that has similar stats. (Even though we’ve recently established that those are made out of beaver anus

However, there is something good here. Arctic Zero is a mild flavored, sweet dessert that you can eat by the shitload. I’m not sure you can eat a pint of anything but celery and stay under 150 calories. And it does taste better than celery. It’s a true case of quantity over quality. You can either eat an entire pint of Arctic Zero or take two bites of a Cheesecake Factory cheesecake.

I didn’t instantly fall in love with it. It didn’t change my life or completely shift my paradigm on the very concept of dessert itself. But I know I’ll buy Arctic Zero again one day. I’d like to try the other flavors and it’s nice to know there is a massive, filling dessert (not made of a million chemicals) out there that I can eat if I’m in the mood to faux-gorge.

And really, in this modern-day reimagining of the Roman empire, isn’t faux-gorging what it’s all about?