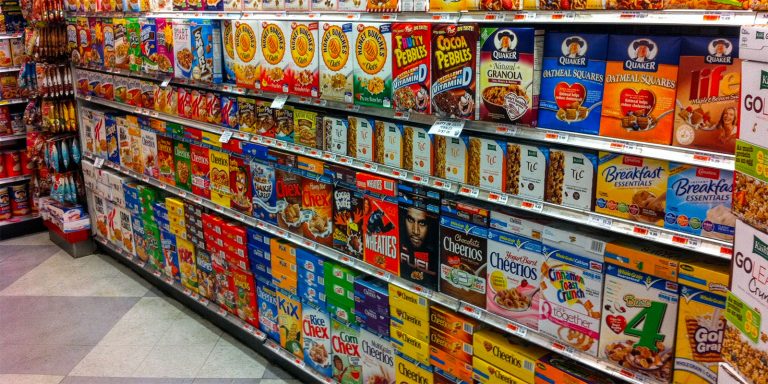 What’s the most popular cereal on Facebook? Which cereal mascot is secretly Italian? What’s the ratio of marshmallows in Lucky Charms?

Cereal is a proud American tradition, dating all the way back to when it was invented to keep people from wanting to have sex. Now we have a ton of varieties of cereal AND sex. Take THAT, Battle Creek, Michigan.

My friends at the real estate blog Movoto put together a list of the 10 best selling cereals in the country last year, as well as the cereals that get the most Facebook likes on a state-by-state basis. I persuaded them to give me the 11th so I could make a list about it and they did.

Here are 11 random facts about each of the 11 best-selling cereals in the U.S.

Cap’n Crunch isn’t really a captain. He only has three stripes on his sleeve, not four — which makes him a commander in the U.S. Navy, not a captain.

Now, there ARE two theories on how he could still have his rank. One, he’s a captain in the French navy, where that rank is signified by three stripes — but I can’t imagine Cap’n Crunch is French. And two, according to Quaker Oats after this stripe controversy broke out, he’s actually a captain of the navy for “Magical Crunch Island,” not America. That feels VERY retconned to me.

Raisin Bran is the only cereal manufactured by the three of the four big cereal companies in the U.S. that has the same name across the board. There’s Kellogg’s Raisin Bran, Post Raisin Bran and Total Raisin Bran (by General Mills). It’s because the term “raisin bran” was determined to be un-trademarkable by a district court in Nebraska in 1944. I really could’ve structured that sentence to avoid having to make up the word “un-trademarkable.”

Every color of Froot Loops is really the same flavor. I would describe that flavor as “vaguely orange.” Kellogg’s confirmed that since the cereal was introduced in 1963, the rings have all been the same flavor — if you taste differences, it’s all psychological.

The ratio of marshmallows to disappointment in a box of Lucky Charms is roughly 1:3.

Frosted Mini Wheats weren’t actually mini sized until 19 years into their existence. From their debut in 1969 until 1988, they were almost four times larger than their current size. They’re the one thing in America that’s gotten smaller.

As more studies prove just how addictive carbohydrates are to our bodies, it’s entirely probable now that Special K the cereal is more addictive than Special K — aka ketamine — the drug.

There’s a scientific principle called the Cheerios effect about the tendency for floating objects to cluster together. That makes Cheerios the only breakfast cereal with a scientific theory named after it. (At least until someone proves that Graham’s law of effusion was inspired by Golden Grahams.)

From 2010 through 2013, 100 percent of the growth in Honey Bunches of Oats’s sales came from Hispanics. That’s fascinating. Essentially, not a single new black, white, Asian, Native American, Indian, Pacific Islander or Inuit bought a box of Honey Bunches of Oats for four years. (Or at least, if they did, it’s because someone of their race concurrently stopped buying it.)

Tony the Tiger is Italian. In the 1970s, Kellogg’s announced his full name is Anthony the Tiger and he comes from a big Italian family.

It’s the the best selling cereal in the country — but not the most popular cereal (based on Facebook likes) in any state in the country. People buy it because it’s got a strong reputation for being healthy. A serving of Honey Nut Cheerios has eight times more sugar than a serving of Cheerios and twice as much sugar as an Oreo cookie. This isn’t a hidden agenda to get your kids to eat less sugar — don’t care — it’s just a hidden agenda to get them better tasting cereal.