As a 25-year (admittedly some of it on-and-off) pro wrestling fan, I subscribed to the WWE Network right when it debuted in February. I’ve watched some old WWE pay-per-views, many of which I’d only seen once either in the moment or on a rented VHS tape in the early ’90s. One of those was the very first WrestleMania.

It’s incredible to behold just how far Vince McMahon and company have come in three decades — and there’s no better way than watching the first WrestleMania. It’s like the difference in watching a first grade play about how seeds need water and the sun to grow versus Cirque du Soliel’s Beatles-themed Vegas show.

Here are 11 random observations from the first WrestleMania that happened (almost) exactly 29 years ago today — March 31, 1985.

1 | Literally the first image is of the World Trade Center 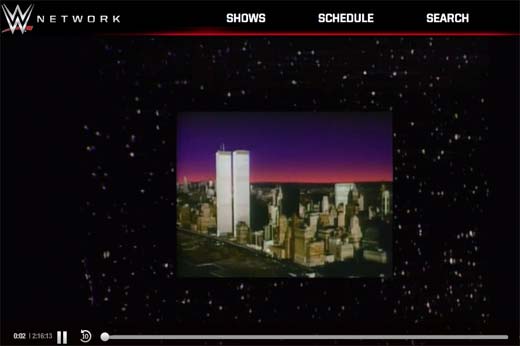 It’s still jarring to see the World Trade Center twin towers — which happen to be the first image shown on screen. WrestleMania was at Madison Square Garden, so they put in some New York imagery. Now I’m all sad and, as you can see above, we’re only two seconds in. At least everything goes up from here. 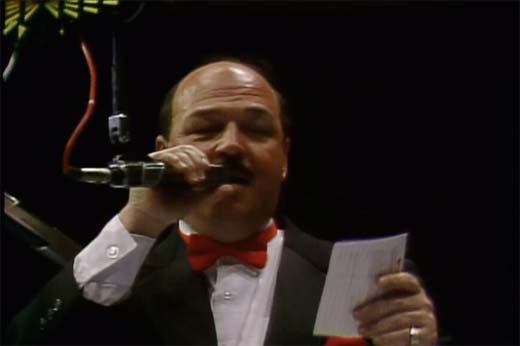 Apparently every other singer on the planet was booked, because the WWF had their backstage interviewer, “Mean” Gene Okerlund sing the National Anthem. He got a… um… reasonable voice but apparently not a reasonable memory — because he had to read the Anthem off cue cards. The WWF/E has hired bigger stars to sing the National Anthem at WrestleManias ever since. (Or, at a minimum, better in-house talent, like their female ring announcer Lillian Garcia who also moonlights as a professional singer.)

3 | The production today is exponentially slicker 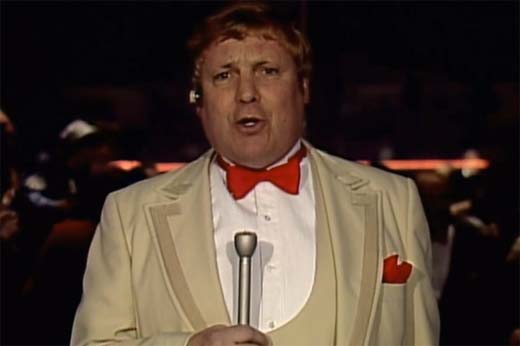 There’s nothing slick here. Over the past few decades, the WWF/E has figured out everything from lighting to announcing to music cues. Here, it’s all just kind of thrown together. The microphone is so old school it still drops out of the ceiling of Madison Square Garden. I picked this screenshot because Lord Alfred Hayes was the on-camera “host” of WrestleMania and seemed to be on quaaludes the entire time — his speech is slow, his eyes are glazed and darting all over the place, and he takes massive pauses between words. Yet they kept on cutting to him over and over throughout the show.

4 | The backstage interviews are absurd 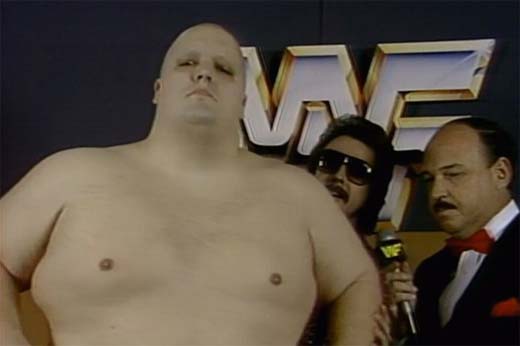 I’ve never seen the WWF/E do this before or since. For backstage interviews, Mean Gene would interview one guy, who would then exit off screen to the right… and his opponent would enter from off screen to the left for his interview. That breaks so many laws of professional wrestling kayfabe. These guys are supposed to hate each other, not wait patiently watching while they give their interviews. Back in this era, the faces and heels weren’t even supposed to be seen talking to each other in public. The first WrestleMania interviews are akin to a debate club meet.

As for the content of the interviews, they’re all SUPER old school. A lot of “Let me tell you something” and “I’m the baddest” and generally unscripted, generic, super-intense boasting without any real through line. Also, for whatever reason, Mean Gene awkwardly cuts all of the interviews off in the middle — they must’ve been trying to stick to a time? — and he ends up talking over the wrestlers in the process. Today’s WWE sticks to a much tighter script which, for better or worse, gives interviews a much slicker presentation. 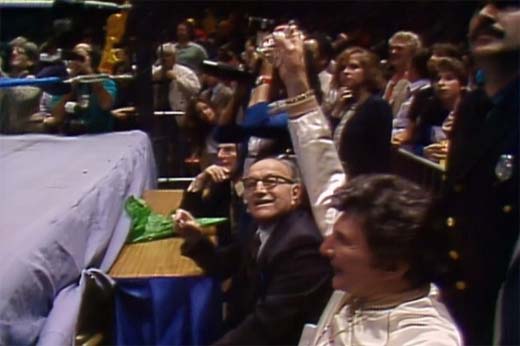 There was no camera time, though, for the overzealous bell ringer, so I picked a screenshot of the guest timekeeper for the main event… Liberace! He comes down in full Liberace splendor, does some kicks with some Rockettes in the ring (and gets winded in the process), then sits outside and rings his suitably ornate mini bell. 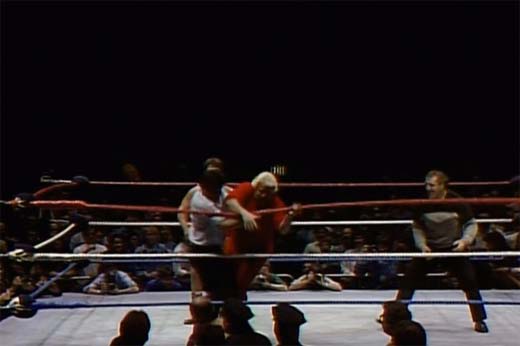 Today, the WWE puts a ton of effort into having long feuds culminate at WrestleMania. (At least long by today’s standards.) Here, that wasn’t really the case. Tito Santana and Greg “the Hammer” Valentine are feuding but wrestle other people. Mr. T and “Rowdy” Roddy Piper were on opposite sides of the main event but their feud lasted for a full year after this. Some of the undercard matches are just random guys thrown together. The current WWE is fond of calling WrestleMania their Super Bowl, which suggests a finality to the year’s worth of battles. The first WrestleMania is more like a pretty good week three game between division rivals one of whom has playoff hopes.

7 | Wrestlers’ physiques have dramatically improved… as has their wrestling 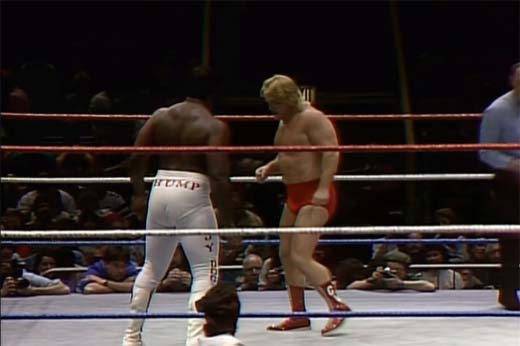 8 | The crowd has much lower expectations 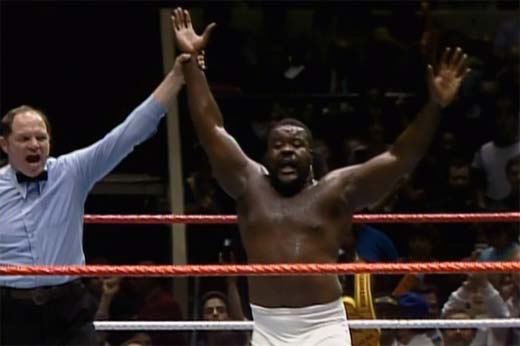 Today’s wrestling crowds have been trained to expect big finishes in big matches. On a major card, it’d be shocking for a match today to end in a count out. At WrestleMania I, the crowd was just so damn happy to see the good guys win, they didn’t care. JYD won his match via countout, which meant he didn’t win the title (you can only get the title by pin or submission) — and he and the fans still went crazy with excitement. A 2014 crowd would never go for that. They’d boo it out of the building.

9 | The music is noticeably edited 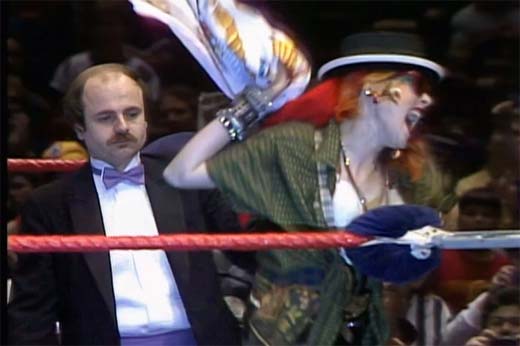 It’s not Vince McMahon’s fault that he couldn’t see the future of media (DVDs, now streaming) back in 1985. But that meant the very select handful of wrestlers who got to enter with theme music entered to copyrighted music. (e.g. Hulk Hogan entered to Eye of the Tiger; Wendy Richter and Cyndi Lauper entered to Girls Just Wanna Have Fun.) The WWE has gone back and removed that music, dubbed in music they own, and dubbed the cheers and commentary back over it. It’s unfortunately noticeable here and, though you really can’t blame them, it pulls you out of the moment just a little to know the footage has been tampered with. That being said… on a scale of one to 10 of history tampering, with 10 being George Lucas, it’s like a two or three. 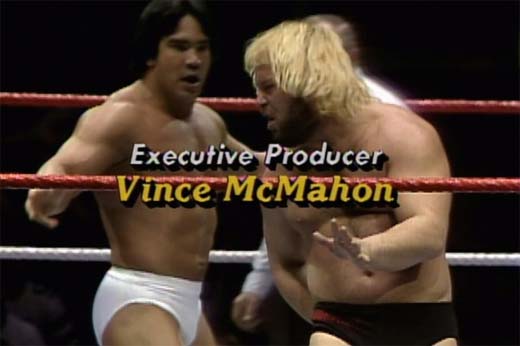 On Sunday, there will be a two-hour PRESHOW, then a four-hour WrestleMania and (I believe) a postgame show after that. Even Monday Night Raw is now three hours. Seeing them get in and out of WrestleMania in basically two hours flat is incredible. It’s like when you watch the British Office and find out the entire series is only 13 episodes long — versus the American Office that did 874 episodes and probably wanted to keep going. 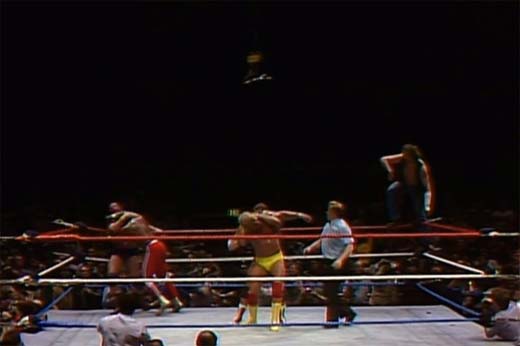 The main event of the first WrestleMania is pure spectacle. Billy Martin is brought in as the (struggling) ring announcer. Liberace is the timekeeper. Muhammad Ali is the special guest referee. Hulk Hogan and Mr. T have Jimmy “Superfly” Snuka in their corner; Piper and Paul Orndorff have “Cowboy” Bob Orton in their corner. The match isn’t particularly long, then completely breaks down. Everyone’s running around and in and out the ring, no one’s in the right position, the non-Muhammad Ali ref (Pat Patterson) has to run to the other side of the ring because he’s not supposed to see the bad guys try to cheat — and finally, the finish involves Orton accidentally hitting Orndorff with his cast and the good guys getting the win. It’s perfectly fitting chaos to begin this epoch of pro wrestling history.

11 Thoughts on the Debut of WCW Monday Nitro