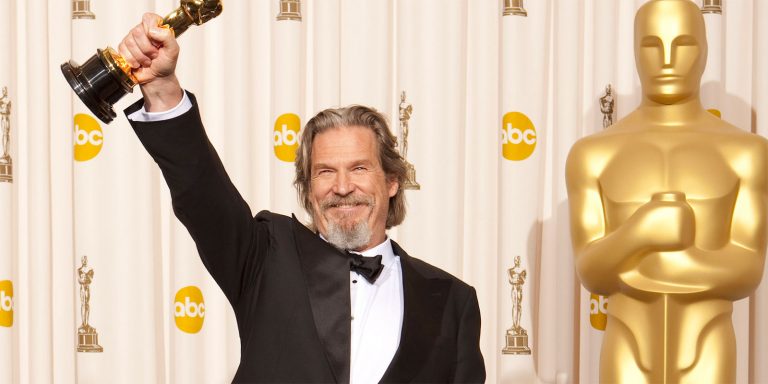 From Kathryn Bigelow directing Point Break to a composer who started off doing music for a Jurassic Park video game, it can be a long journey to the Oscars.

Last night, as I watched Kathryn Bigelow win the Oscar for Best Director, there was only one thought in my mind.

This is the same woman who directed Point Break.

Sure, I have a burning nostalgic love of Point Break (and once did a list of the 11 cheesiest Point Break quotes)… but, in a vacuum, it’s one of the worst movies ever. Illogical script, Keanu Reeves delivering the woodenest performance of his career, cringeworthy lines in every scene and a corniness that pretty much defines why we’re all desperate to forget the early ’90s.

And now, just under two decades later, the woman who directed that becomes the first woman to win the Oscar for Best Director.

So my angle on Oscar coverage is going to be a lesson: Everyone does a whole bunch of crappy, embarrassing, demeaning, brutal stuff in their career before things take a monumental turn for the better. For me (and maybe, for you) it’s a reminder that no matter how much garbage we have to slog through in our own lives and careers… all these super successful Hollywood types do it too. And their embarrassments are on a much larger (and mock-able) scale.

Only a few years before winning Best Supporting Actress, she had a supporting role in Beerfest. I like about 60 percent of Beerfest — she’s part of the other 40 percent.

Her role as a live-in nurse-turned-evil German spy included a drunken sex scene where the guy thought a hot black chick was with him… but it was really Mo’Nique. In the scene he licks her robust feet and she pours mustard on him. It’s not… cute.

It’s taking all my being not to pull a Church Lady, look at the Beerfest scene and sarcastically say, “Well isn’t that precious… based on the novel Push by Sapphire?”

In 2003, Jeremy had done a few movies (including National Lampoon’s Senior Trip)… but was floundering in his career. So much so that he appeared on a hard-to-watch Bravo reality show about struggling actors called The It Factor.

Toward the end of the series he gets cast in S.W.A.T. and celebrates that now he can stop avoiding all the bills in his mailbox. It’s one thing to be in bad movies… but being on reality TV is a whole different level of career trouble. (Then again, after Jennifer Hudson, he’s now the second reality TV “contestant” to be nominated for an acting Oscar. Isn’t that right, Jim Carrey?)

Renner should just be thankful he took the reality TV plunge in 2003, not later on. I don’t think anyone’s going to make the transition from I Love New York to the Academy Awards.

3 | Anna Behlmer – sound recording on Masters of the Universe

She’s been nominated for a ton of Oscars for sound and sound mixing; this year it was for the sound in Star Trek.

Her second career gig was recording the sound during the live-action version of Masters of the Universe. In other words: She had to make sure they got clean takes of Dolph Lundgren’s lines.

I guess that once you achieve that, nothing is ever truly difficult again.

At one point, she stood on set, watching Gary Busey nonsensically scream at Keanu Reeves to bring him two meatball sandwiches… TWO!… and said, “Yep, I got what I need, let’s wrap.”

I’ve never hid that I like Miss Congeniality. I think it’s funny. (There have been two previous times on this website where I’ve declared my love for it.) I’ve also never hid my disdain for the sequel.

I’m not sure how much costume design went into Cabin Boy but I’m guessing this one wasn’t much of a resume builder. It’s certainly a long way from Nine, which got her nominated this year.

Although finding clothes that make Chris Elliott jump off the screen is probably a more difficult task than doing so for Marion Cotillard and Penelope Cruz.

These days, this guy composes everything, from Up to Land of the Lost to Lost… and even occasionally things not set in mysterious, exotic tropical locations.

His first gig was… another mysterious, exotic tropical location. He did the music for The Lost World: Jurassic Park. Not the movie, the video game for PlayStation One and Sega Saturn.

Scoring a video game was a new concept at the time, and might’ve been better received… if they hadn’t made it so difficult to score in the game itself. The reviews contained words like “impossible,” “frustrating,” and “you’ll give up”… so it’s not likely many people got to hear Giacchino’s dramatic climax during (I assume) a battle with a T-Rex.

One of the three editors on Avatar was once the only editor on a 1990 after school special. It was directed by Diane Keaton… starred Patricia Arquette… and featured the heart-tugging story of a girl whose brother was diagnosed with schizophrenia.

I don’t think today they’d get away with using “crazy” in the title of a movie like that. Hell, on my lil ol’ website I once wrote that today’s children are narcissists and got a flood of angry letters from real narcissists about how I was misusing (and cheapening) the word. (At least I think that’s what the e-mails said. Sometimes when I’m reading them I see my reflection in my computer screen and get lost in my eyes.)

Today it would either have a politically-correct title like Coping With A Bipolar Brother… a vague, ambiguous title that looks good on a poster like The Two… or be a spin-off like The United States of Tara Presents: The Soviet Union of Billy. And I don’t think Rivkin would edit it.

Fifteen years ago, a little movie came out called Jury Duty. It was a vehicle for Pauly Shore. For those younger readers who don’t know Pauly Shore, he’s basically like all the bad parts of Russell Brand and The Miz mixed together with an animal Speak-and-Spell.

Stanley Tucci, who has appeared in approximately two Oscar-nominated movies every year for the past decade, was in Jury Duty. Where his only purpose was to make Pauly Shore look like a huge star.

He plays an uptight environmentalist juror… one of the 11 who are tormented by Pauly Shore as he tries to remain sequestered for the sake of free food and a free hotel room. In this movie, everybody’s the straight man to Pauly. Even future Oscar nominees. (And, to a lesser extent, other co-stars like Tia Carrere, Brian Doyle-Murray, Dick Vitale for some reason, and, sigh, Abe Vigoda.)

Anyway, to figure out what part Stanley Tucci had in Jury Duty, I actually watched the entire movie… and here’s a spoiler alert — Tucci turns out to be the killer in the end. Did I need to spoiler alert a 15-year-old Pauly Shore movie? No more than I needed to sit through the final 40 minutes after I figured out which part Tucci played, I guess. We all make choices.

From 1971 through 1977, Morgan Freeman got his start by playing a variety of characters on the PBS show The Electric Company.

You can even see some rescued footage of it here.

After almost an entire decade of playing characters on the show including Easy Reader, Dracula and Vincent the Vegetable Vampire, Freeman admitted he probably “stayed too long.”

I’ve never seen Heaven’s Gate. But I have seen every movie starring Dane Cook. And Heaven’s Gate is widely considered worse than all of them. So… wow.