How did I do in my ninth year of Super Bowl prop bets? Let’s just say the Patriots’ comeback completely changed my day.

Last week, for the ninth year in a row, I put real money on 11 ridiculous Super Bowl prop bets. (As always, $11 on 11 different bets for a dumb-ness total of $121.) And since I enjoy accountability, for the ninth year, here’s a review of how I did…

1 | How long will it take for Luke Bryan to sing the U.S. national anthem?

The over/under was set at 2:07.5. I did my scouting on Bryan’s past performances and found he’d never hit that number. My tradition has been to pick the over every single year (with sexy results), but this year I waffled and bet the under at even odds. And… more sexy results. Bryan clocked in at just a shade under 2:05 for a very comfortable victory.

2 | Will any player kneel during the national anthem?

As predicted, the “kneeling during the anthem” trend didn’t find its way to the Super Bowl. (Fortunately the Super Bowl commercials took it upon themselves to make political statements in its stead.) My bet on “no” was at -700 so it only paid $1.54, but that’s way better than an $11 loss.

3 | How many times will Donald Trump tweet during the game?

I bet over 1.5. And, of course, the one time I’ll ever want that asshole to tweet, he lets me down. I should’ve known better than to make a bet that relied on him. Cancer doesn’t occasionally decide to take a temporary break from killing you to make you healthier.

4 | Will the fire alarm be triggered at either team’s hotel the night before the game?

Lamentably, my high hopes for the drunk New England fans becoming known as the “fire alarm pulling bros” were misguided. As far as we know, the Falcons slept alarm-free. (But even with that good night’s sleep, they still got tired late in the second half once the defense had been on the field for approximately 14 million minutes.)

5 | How many times will “deflate” or “Deflategate” be said on TV during the live broadcast?

My win on this bet was pure experience. Every year there are these tempting bets that the announcers will ramble off on extracurricular tangents, but every year they stay laser focused on the game action. Because of that — and because of my belief that the NFL would really like to forget the entire Deflategate thing ever happened — I bet the under on 1.5 mentions at -120. There were zero mentions.

6 | What will the prominent material be made of [sic] on Lady Gaga’s first outfit during halftime? 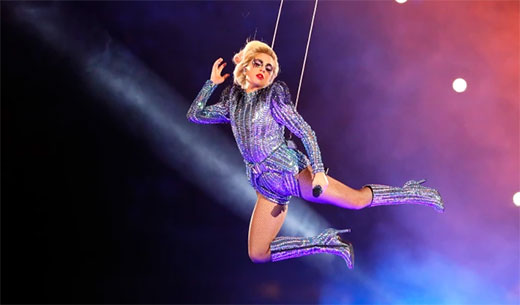 I bet cotton/polyester/tweed. That did not pay. I’m not sure what did — spandex? metal? Blade Running gymnast’s leotard? — but my prediction of Gaga going demure early on in her set was a big swing and a miss.

7 | What will Lady Gaga play as the first song?

So… what paid? A bet on the field, because of God Bless America? Edge of Glory, because the patriotic songs on the roof were pre-recorded? Poker Face, because it was the first song performed in full? The sportsbook where I placed the bet went with… “um, we don’t know” and they pushed all the bets. I was on Edge of Glory, which had the weakest case of any of the above outcomes, so this is a real “a push is a win” situation. It’s the prop bet equivalent of standing on 17 against a dealer’s 10 and getting the push.

8 | Will the word “lacrosse” be said on TV during the live broadcast?

Remember all the self-congratulating I did a few points ago when talking about my experience on the commentators’ discussion topics? My bet in this scenario certainly weakens my resume. I thought that Chris Hogan’s peculiar lacrosse background, coupled with his prominence in the Patriots’ offense, would lead to a mention of the word “lacrosse.” But after his first catch, when there was no mention, I realized I’d made a mistake. It’s especially disappointing because “no” was at +170, so I could’ve made up some real ground with a smarter bet here.

9 | How many commercials featuring Peyton Manning will air during the game?

I speculated that advertisers had moved on from the retired Manning as the most marketable NFL player — at least during the Super Bowl — and that appeared to be the case. While Tom Brady was featured in back-to-back commercials, Manning was in zero. I bet under 1.5 at +140, winning $15.95 — spoiler alert, my biggest win of the day.

10 | Will “Houston, we have a problem” be said on TV during the live broadcast?

11 | If the Patriots win, will Brady, Belichick or Kraft be seen shaking Roger Goodell’s hand on TV?

Quite a twist here. Until the closing moments of the game, it looked like this bet would be a push since the Falcons had the win in the bag. And now, seeing my running tally, that push would’ve meant a losing day for me. But, of course, the Patriots completed their epic comeback, as horror movie villains are wont to do, which put this bet back in play.

And my prediction was spot on. I wrote:

[W]ill they shake his hand? Belichick won’t. Public perception, forgiveness, etc. be damned, Bill Belichick DGAF. Brady’s more media savvy, so he probably would, just to put the whole thing in the past — although he probably won’t be in position to do so. And Kraft definitely would, because we’re now in an era where soon-to-be-even-richer white dudes are putting aside their differences to wallow in their mutual crapulence. Kraft will also be the one who will have the opportunity for the handshake, and I say he goes for it.

As if on cue, Brady DID take the handshake when it was offered before the trophy ceremony (it happened during a commercial, but FOX was so hot on it they replayed it when the broadcast came back), and Kraft shook Goodell’s hand as he received the trophy. Belichick? Still DGAF. And with that, my “yes” bet paid $6.27 and nudged me JUST into the black for the day.