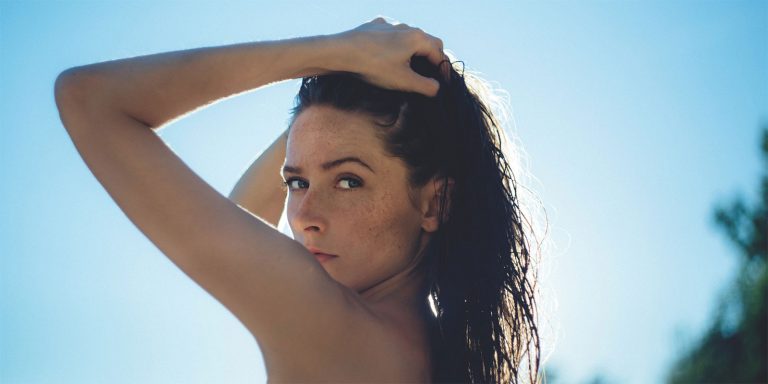 Advice on angles, lighting and also a whole bunch of non-technical stuff.

I got a request for this list and, well, I just couldn’t say no.

I don’t have any experience in the realm of taking nude photos. I’ve never taken them or, thankfully, posed for them. But I have looked at millions of nude photos… my career has led me to develop a fundamental understanding of making people look good in the visual media… and, because I just am who I am, I’ve carefully analyzed the fallout of many celebrity nude photo and sex tape scandals.

1 | Don’t take the photos yourself

Myspace has done a lot of damage to the world. But beyond setting web design back a solid 12 years and occasionally making people commit suicide, one of its true cardinal sins was making people think it was OK to take self-portraits by extending their arm as high and far as they can and taking a photo of themselves.

Yes, you look better from a super-high angle. It hides every chin except your primary one and up to 340 pounds. But your nude photos shouldn’t include you extending your arm. That’s not a “sexy” angle, it’s a lazy angle.

Your best bet in making the photos look good is to have someone else take them. They’ll be able to capture you from multiple angles, from multiple distances… and without your arm hyperextended.

If you don’t want to bring in anyone else for your naked photo shoot, at least put your camera on a tripod (or makeshift tripod, like books stacked up on a dresser) and use the timer.

Today’s cameras are way too powerful for their price. Which means they pick up everything. Everything includes: Razor bumps… redness from fresh waxing… splotchy teeth… scars… that one black hair growing near your nipple… stretch marks… and varicose veins.

By waxing/plucking/Epil Stop and Spraying the day before, you can fix some of the blemishes you’d get from day-of hair removal. You can get around the rest of the stuff with liberal use of make-up. (Yes, if you’re a guy taking nude photos, you can use make-up too.)

And you should use make-up. Because, odds are, you’re not good enough with Photoshop to properly fix that stuff in post… and airbrushing isn’t going to be at your fingertips.

The most important reason to fix all this stuff is because you MUST be confident for the photos. If you’re embarrassed or (overly) self-conscious or holding back, it will show.

So don’t eat carbs on shoot day. It’s what every fitness model does before their magazine cover shoots.

By not eating, you’ll (1) look better without that brink sitting in your belly and (2) more importantly, feel like you look better. It comes back to that confidence thing.

The biggest decision you have to make is whether you want your face included in these photos. Let’s break down the pros and cons.

Reasons to include your face:

Reasons to not include your face:

So it’s your call, and it’s a big one. Some people don’t have a problem with nude photos of them existing in the world. Some people do. I, personally, do. The classy dames on Girls Gone Wild who sign away the lifetime rights to their nude image in exchange for a $4 tank top clearly do not.

Search Google Images and you can see tons of attempted sexy photos that were screwed up by not cleaning, clearing and securing the environment.

So, before you shoot, get everything even remotely unsexy out of the room: Family photos, Scarface posters, garbage, unmade bed sheets, your kid. Almost no stuff is always better. You can use props, but shooting in an extremely clean, minimalist space guarantees the focus will stay on you.

Rather than write an essay about how to properly light photos, I’m going to just give three quick pointers. I feel like they’ll stick better that way, which is good — because if you eff up the lighting, you will hate the way you look in the photos, develop a complex about how you look naked, and start wearing denim cutoffs when you shower.

Hopefully that very, very, very basic Lighting 101 lesson will help you avoid making a gaffe. Get it??? GAFFE?!? HI-YO!!!

This will help you plead the “art” defense if your mom, grandma, pastor or assistant pastor somehow get their hands on the photos. You’re looking for Playboy here or, at the worst, Cinemax. When you start venturing into Hustler or Club or Backdoor Sluts 9 territory, no amount of black-and-white can class you up.

Black-and-white nude photos are, generally, artistic. Unless you’re taking super-extreme close ups of your genitalia. Which bring us to the next point…

8 | Be very, very careful with close-ups of your genitalia

Because it will, literally, destroy you if you take a bunch of nude photos, you hand them to your boyfriend, he’s looking through them with a huge smile on his face, then flips to a photo taken three inches from your vulva and instinctively recoils. And possible makes a Little Shop of Horrors comment.

There’s no human being that looks good from every angle. You need to find the angles that work best for you. Experiment with lots of different angles during your shoot, because you never know what’s going to work. But, in general, there are a few angles that should be avoided at all costs.

Also, although I didn’t put it on that list, make sure not to take every picture when you’re too “excited.” That goes for both genders. It might come off as unnatural to the point where it’s noticeable… and you may find you look even better when you’re not completely at attention.

10 | Don’t look at your photos halfway through

I can’t recommend this enough. The single best way to be self-conscious (other than your little brother busting in on your photo shoot and yelling “you look like a fat asshole”) is to scroll through the camera halfway through the shoot.

As the shoot progresses, you’ll become more and more comfortable. You need to get into that zone of relaxation, experimentation, confidence. Seeing your photos will jar you out of it.

As a human being, there’s no one more critical of your body than you. (Lorenzo Lamas on Are You Hot? excepted.) So you’ll notice the tiny size difference in your breasts, the way your nostrils flare, your elongated earlobes, your birthmark, your off-center labia, your patchy leg hair.

But no one else will, and, remember, no one else would care. Keep your confidence by waiting unitl the end of the shoot to look at your photos; let your photographer direct you and help guide you into the best poses.

11 | Make a plan for the future of the photos

Naked photos of you now exist. You need to have a plan. Will you download them onto your computer, print them once, then delete the files off your hard drive and camera? Did you use a Polaroid? Will you put them on your cell phone to “sext” (isn’t that what the kids are calling it these days)?

Whatever your plan is, take whatever privacy measures you can to give yourself a 0.004 percent chance that they won’t fall into the wrong hands. Because there’s a 99.996 percent chance they will. But if you don’t take these precautions, that jumps up to 99.999.

11 Wedding Photos Ruined by Something Inappropriate in the Background