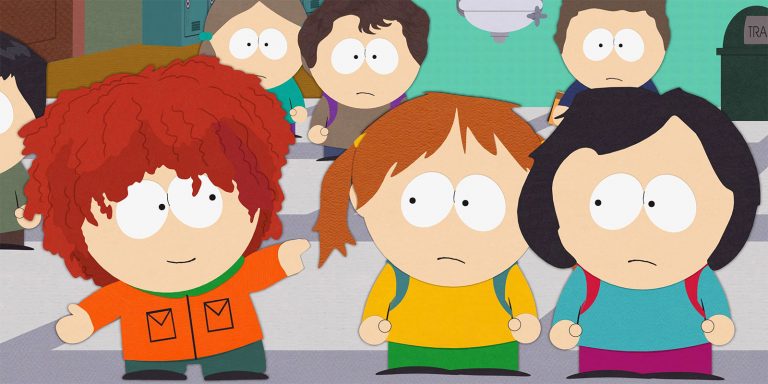 South Park’s parodies of everything from Irving Berlin to Puff Daddy.

But last night, South Park began the second half of its 13th season… and even though the episode was only so-so, I decided I could delay my list no further.

So here’s the first South Park-themed 11 Points: The 11 most spot-on song parodies from South Park. Now… this isn’t the same as the best songs from South Park (although there’d be a lot of overlap)… these are all songs where the show nails (and, thereby, brutally and brilliantly parodies) the style of an actual song, artist or genre.

And yes, because there are only 11 I had to make some very, very tough cuts (Fingerbang, I’m a Little Bit Country, Prostitutes, AIDSburger in Paradise, Queef Free and many, many, many, many more.)

This is from the South Park parody of You Got Served — which would be on the list if I ever did a top 11 episodes (and I just might). That song had three strong contenders for this list: The “Let’s see you dance, sucka” song… the “you do a line, I’ll do a line” song the duck dances to… and finally, the song that I ended up picking.

I think Irving Berlin (along with a host of other decades-old singers) would be proud of the old-fashioned sound coupled with the not-so-subtle innuendo of this tap dancing song. It’s so geniusly understated, it artistically sounds like it was played through a phonograph and, in just four lines, it provides a hall of fame South Park moment.

Best line: “I’ve got something in my front pocket for you. / Why don’t you reach down in my pocket and see what it is? / Then grab onto it, it’s just for you. / Give a little squeeze and say: ‘How do you do?'”

I actually watched a good number of the R. Kelly Trapped in the Closet videos. (I’ve previously mentioned some of the absurdity in this list.) In this, the Scientology episode of South Park, they parody these R. Kelly songs, including the most important elements: Terrible free verse, homosexual overtones, and, of course, someone pulling out a gun.

All it’s missing is a line about a “midget who just shitted on hisself.”

In this season four episode, “A Very Crappy Christmas”, the boys need a miracle to get their animated film done… and, in the process, save Christmas. They recreate the song Even a Miracle Needs a Hand from the animated Twas the Night Before Christmas — but this version is sped up, involves Stan doing an impression of Cartman and Kenny dying. It’s not just a great parody — it’s actually a BETTER version of the original.

Best line: “Even a miracle needs a — [Truck runs over Kenny.] / It’s okay. We’ll just have his character die in the film.”

All of the music in the “Elementary School Musical” episode is great — really, really nailing how absurd and obnoxious it is for kids to just constantly break out into song at school.

I picked the final song from the episode, where the main characters finally cave in and start singing, because the melody and lyrics are straight out of the HSM playbook… and Kyle letting down his hair to look like Corbin Bleu (not a sandwich, by the way) is a glorious added touch.

Best line: “You gotta do what you wanna do. Just make sure what you’re doing is cool and popular with everyone else.”

I’ve never been a giant fan of the Mr. Hankey episodes, but I’m a huge fan of this Lion King parody (also from the episode “A Very Crappy Christmas”). As much as I tire of the Mr. Hankey poop jokes, using a Circle of Life parody to illustrate how feces is the catalyst to the food chain is solid.

The parody peaks when, in classic Disney style, the little boy who has been talking in a squeaky voice the whole time starts singing… and he’s got a rich, deep, totally incongruous professional singer’s voice. It’s so Simba.

Best line: “I’m the leg of a leopard, and the wings of a hen. Which becomes the inner part of humans, and turn back to poo again.”

South Park really hit its stride when Butters finally became one of the major characters. “Butters’ Very Own Episode”, the finale of season five, is highlighted by the theme music… a cheesy, corny song that fits Butters (and the corny ’80s/’90s family sitcom era) perfectly.

Butters might as well be Viki from Small Wonder with this theme song. (Although, as Awesome-O proved, Butters and robots aren’t the greatest mix. Unless you want Adam Sandler movie ideas, in which case they’re the greatest ally you’ve got.)

Best line: “Who’s the tike with the cutest little dimples, battin’ his eyes at every puppy he sees? / If you look inside yourself, you might be surprised when you find a little boy named Butters! (That’s me!)”

South Park hit Kanye West hard in their “Fish Sticks” episode earlier this year… it wasn’t quite as hard as they hit Mel Gibson, Jennifer Lopez, Phil Collins or Paris Hilton in the past, but it was close. And this all came before the Kanye/Taylor Swift incident.

The Gay Fish song is a spot-on parody of Kanye’s auto-tuned album 808s and Heartbreak… so spot-on it almost sounds like Kanye sang it himself. (Which we know he didn’t because he would never, ever admit that he’s a gay fish. Just because he likes fish sticks.)

Best line: “All those lonely nights at the grocery store / In the frozen fish aisle, feelin’ like a whore.”

4 | Where Were You (When They Built The Ladder to Heaven)?
– parody of Alan Jackson

This is from the episode where the boys build a ladder to heaven. They’re doing it to try to get back the ticket to a shopping spree from Kenny (who died)… all the adults think they’re just building the ladder to see their dead friend and it’s naively beautiful.

Alan Jackson shows up to sing a song about it and South Park doesn’t bother to let you figure out why they chose him — they reference how he sold a ton of albums with his songs about 9/11 and he’s arrived to exploit the ladder to heaven in the same way.

It’s great to see them take him to task for cashing in on September 11th, and the parody of his Where Were You (When the World Stopped Turning)? enters the realm of satirical perfection.

Trey Parker and Matt Stone’s send-up of Christian rock stands as one of the greatest things they’ve ever done. Cartman, Butters and Token forming a lame Christian rock band — where all of Cartman’s lyrics about Jesus inadvertently venture into the sexual realm — is one of the indisputable highlights of the entire 13-season run.

Every song they sing in the episode is gold, but I went for the pinnacle: The commercial for Faith + 1’s album that includes the two lyrics I’ve spotlighted below.

It’s unthinkably offensive while simultaneously being unbelievably funny. In other words, it’s exactly what South Park strives for.

Best line #2: “I wanna get down on my knees and start pleasing Jesus / I wanna feel his salvation all over my face.”

2 | La Resistance – parody of One Day More from Les Miserables

I wanted to pick one song from the movie, South Park: Bigger, Longer and Uncut… but picking one is tough when pretty much every song is a spot-on parody of a different genre.

Uncle Fucka mocking Oklahoma; and the opening Mountain Town and Satan’s Up There mocking Disney movies like The Little Mermaid are excellent. But my absolute favorite is the La Resistance medley that ties together all of the storylines in an almost note-for-note Les Miserables spoof.

Best line: “They may cut your dick in half, and serve it to a pig. And though it hurts you’ll laugh, and dance a dickless jig. But that’s the way it goes, in war you’re shat upon. Though you die, La Resistance lives on.”

They took everything everyone’s ever wanted to mock about Puff Daddy’s Vote or Die concept (and about Puffy’s lyrical stylings), and turned it into one incredibly funny hip-hop video. This isn’t just good TV — it’s a cathartic parody on behalf of an entire country that’s sick of Puffy.