11 Super Sexy Products — For Your Dog

Do dogs need thongs, fake testicles or chew toys that look like gimps?

I don’t know why someone would want to make his or her dog sexy.

Maybe they think: “Sexy dog equals sexy owner”? Or maybe: “It helps my self-esteem when I feel sexy, I assume it’s the same for my dog”? I don’t know.

Here’s what I do know. Americans have empirically proven that we are willing to spend billions of dollars on our dogs. The U.S. pet industry took in more than $45 billion last year (which, by the way, is more than the gross domestic product of Bulgaria) — and a huge chunk of that went toward our 77.5 million dogs. What this means: If there’s a product that people might, just might, buy for a dog, someone’s going to make it.

And that has come to include a stunning variety of products aimed at dog sexuality AND sensuality.

Things this list is not: (1) A commentary on bestiality. I don’t believe these products are marketed at people who love dogs in a deviant way, nor do I believe they’re the primary consumers of the products. (2) An indictment of the breeding industry. I don’t want to get into (on one end of the spectrum) puppy mills, induced heat, backyard breeding, etc. and, on the other end of the spectrum, Mike Vick and his rape stands. That’s a whole different area of discussion. (3) An excuse to make a bunch of doggy style puns. At least, it probably isn’t.

Preamble over. Here are 11 real, sexy dog products… both to make your dog sexier, and to, I guess, help him or her out in their sex life.

I blame Sisqo for this. I blame Sisqo for a lot of things. (Including not getting more famous to the point where his name would become legal for use in Scrabble, thus providing a fantastic q-but-no-u word option.)

Anyway, these thongs for dogs aren’t just a way for your dog to show off that she’s got dumps like a truck, truck… they’re also super absorbent, in case your dog has incontinence like what, what, what.

Ever thought to yourself: “I can’t think of anything better to do with $200 than buy my dog something to mount and hump?” Well, allow representatives from every charity in the history of mankind (even including The Human Fund) to introduce you to the HotDoll.

Billed as “the first and original sex toy for trendy dogs only,” HotDoll is an abstractly-shaped plastic sculpture with a strategically-placed hole. So instead of humping your throw pillows, now your dog can hump this.

You can get a less-abstract-looking dog sex toy — which, therefore, is much more conspicuous when you have company over — for $100 from a Brazilian company. This one is called the DoggieLoverDoll. It accomplishes the same purpose. So would a bagel taped to a large Snoopy figurine. 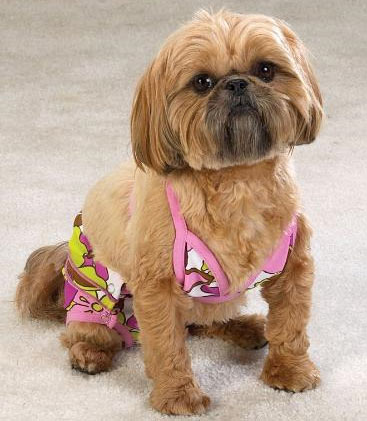 I mean… you don’t want your dog walking around in a one-piece like it’s the ’50s, right? I’m not sure what a bikini accomplishes (the bottom part doesn’t cover ALL the nipples that might be exposed, and the top part doesn’t cover anything) — but your dog sure will look foolish. And isn’t that what dressing up a dog is generally about?

The bikini takes a haute couture brand strategy and only offers small sizes — just XX-Small, X-Small, Small and Medium. So you’ll have to revise your master plan to dress your Great Dane in a bikini just to knock him down a few pegs. 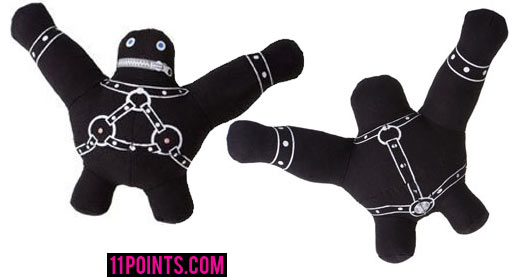 The toy isn’t just shaped like a gimp… when your dog bites it and tosses it around it shouts out “Oh yeah! Ahh that’s good!” Really. That’s exactly the kind of sexual deviance that goes on behind closed doors but never gets reported on in the Daily Growl.

Lower back tattoos know no species. You can put a temporary (thank God) tattoo on your dog that broadcasts her desperation to the world. Choices for tattoos include slogans like “Bite Me” … “Gangsta” … “Hey Human, Pick Up My Shit!” … “Take Me Home” … “Who’s Your Doggie?” and “Butt Sniffer.” (Which, coincidentally, is what a lot of humans’ Chinese tattoos actually translate to.) 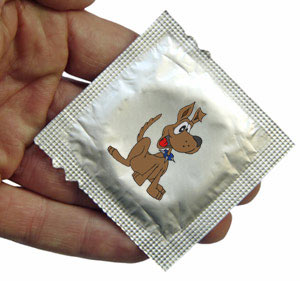 My bullshit detector goes off when I look at the website for Doggy Condoms — I feel like it might just be a parody site by an anti-neutering group to try to get some attention. The warning signs are there: you can’t buy the condoms anymore, there’s no real info about the company selling them, and the website is over-the-top in its jokes (“Don’t use your mouth to apply it [to your dog] … dogs find interspecies contact of this sort demoralizing.”)

A second dog condom site has a big product recall warning on top, telling people the condoms had “an unacceptable failure rate.”

Whether the concept of dog condoms is satire, promoting an agenda, or a product that was rushed to market and still isn’t quite ready for real use — I just wanted to make sure you know this exists. They also make dog birth control pills and I found a patent application for a dog IUD. I suppose any of those would be a better alternative than trying to teach your dog the rhythm method. 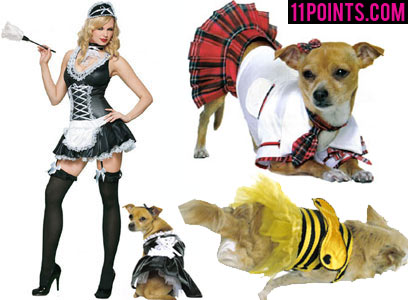 Next Halloween, as you dress up as a Sexy Schoolgirl, Sexy French Maid, Sexy Raggedy Ann or Sexy [Insert Animal Other Than, Ironically, Dog]… now your dog can join you.

To me, this is a counter-intuitive move — if you’re wearing lingerie out on Halloween for the sake of attention, why diffuse that attention by syncing up your dog? It’s clearly going to get more attention for its costume. I certainly know when I go out on Halloween I won’t dress up my dog in a “normal guy wearing jeans” or, if I’m extra motivated, “scary ghost with eyeholes” costume. 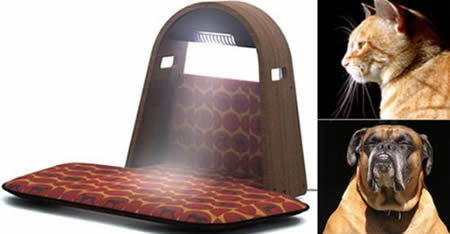 If Jersey Shore has taught us anything, it’s that the key to having a successful sex life is to make yourself as tan as possible. Even if it makes you look like a leather-bound first edition of The Sun Also Rises by the time you’re 24.

So make sure he gets nice and tan, so he’ll be irresistible to other nice and tan dogs. (Or any of the Jersey Shore people after they’ve had a few drinks and are no longer picky about things like phylum or genus.)

Unfortunately (I had a typo my first go-round here where I typed “unfurtunately” there, which I liked) the SunSpa Pet Tanning Bed, which I’m featuring here, is currently off the market. The company’s website is down so, if you want to tan your living pet’s hide, for now, you’ll have to take him out into the sun. 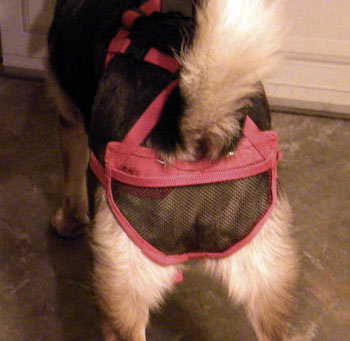 You trust your dog. It’s the other dogs you don’t trust. Sure, you’ve raised your dog right, given her self respect, reminded her that her dog virginity is a special flower she can only give to one dog. But you know how those high school dog boys are. They’re so convincing and know all the right dog things to say.

Then won’t you be glad you invested in some Middle Age technology to watch your dog’s genitalia when you aren’t around? 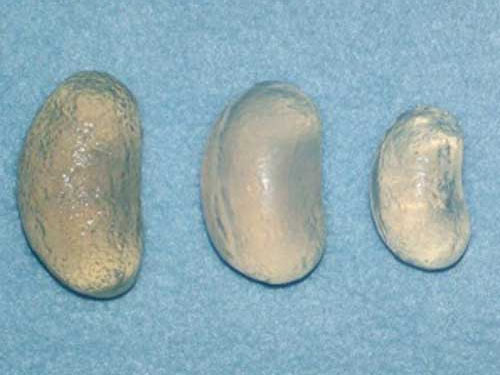 Of course, one could question whether your dog really WANTS fake testicles — after all, to quote Will Ferrell, [he’s] a f*cking dog. The Neuticles website addresses that very issue:

Their pet can tell them when they are hungry, want to play, don’t feel well, hide when approaching the vet’s office or will get excited when driving by or going to the park- why wouldn’t the pet know a familiar body part is missing? Would he know if his foot was cut off? Of course he would- its only common sense.

So join the other 325,000 people who’ve decided that their dog deserves a refill and sign him up for some elective plastic surgery. 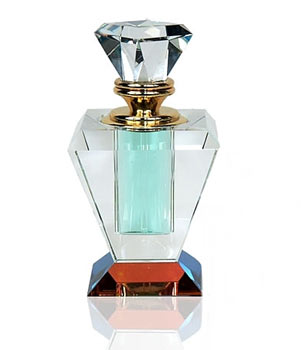 Your dog probably smells most of the time. (And, as we learned during an old list, wet dogs smell very similar to white people. No one wants to smell like wet dog OR wet whitey.)

So make him or her sexually desirable again with perfume. There are tons of dog perfumes and colognes out there — including one that costs THREE THOUSAND DOLLARS, can only be made once every two years from the rare petals of the Osmanthus flower… and is a perfume that works on both dogs AND humans.

I suppose if you’re dropping three grand on something for your dog, you should get to enjoy it as well. I mean… you spend $4 on a box of dog biscuits and you know, that one time, you took a bite to see what one tasted like.

11 Most Controversial Issues Dividing the Country

11 Sexiest Items For Sale at the 99 Cents Only Store