I manually took the data out of the graphs and put it into more manageable words so we could all enjoy it. Sans graphs! Yellow graphs! Pie graphs! Graphs built out of the bones of other, weaker graphs! 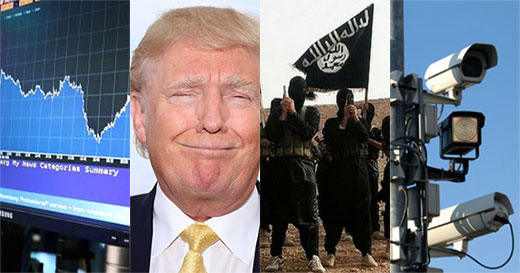 If you’re going to choose the word “flood,” why not go full pun and say, “Some dam refugees will flood the U.S.” I like puns more than graphs.

9 | Governments will violate my privacy with increased surveillance of my actions, 38.2 percent

8 | Hillary Clinton will be elected the next president, 39.5 percent

Three out of five people aren’t afraid of that, which is by far the best compliment any presidential candidate could get in 2016.

These two seem very similar, but since everyone’s increasingly becoming afraid of the word “huge,” there’s the edge.

5 | The so-called Islamic State will grow in threat and size, 44.1 percent

4 | Islamic extremists will strike the U.S. in a massive attack, 44.7 percent

3 | Donald Trump will be elected the next President, 45.2 percent

2 | Terrorists will strike with a massive attack on one of the developed countries, 47.2 percent

ISIS, ISIS, Trump, ISIS also happens to be the format sheet for every cable news network.

1 | Another mass shooting will happen in a school or public place, 51.1 percent

Considering (at least) one happened in between when the survey was taken and released, this seems awfully valid.

And now, the 11 things Americans are least afraid of happening this year…

11 | A deadly virus will wipe out a big part of Earth’s population, 23.7 percent

9 | My identity will be stolen by computer hackers, 22.5 percent

Most likely mediocre hackers who somehow tricked you into clicking on an email from Bank of Umerica.

There was also the choice that “Obamacare will be reinforced,” which 32 percent of people were very afraid of. Guaranteed health care is coming to get you and eat your children!

3 | Machines with artificial intelligence will take over the world, 16 percent. One out of six people think this is the year their toaster is finally going to fight back

1 | Earth will be attacked by aliens, threatening all human existence, 9.4 percent

While it came in last out of more than 40 fears — 1/11th of the population is still pretty sure aliens are going to destroy the Earth this year.

11 Minorities With the Next Best Shot at Being Elected President

Why Is Paraguay Obsessed With Rutherford B. Hayes?