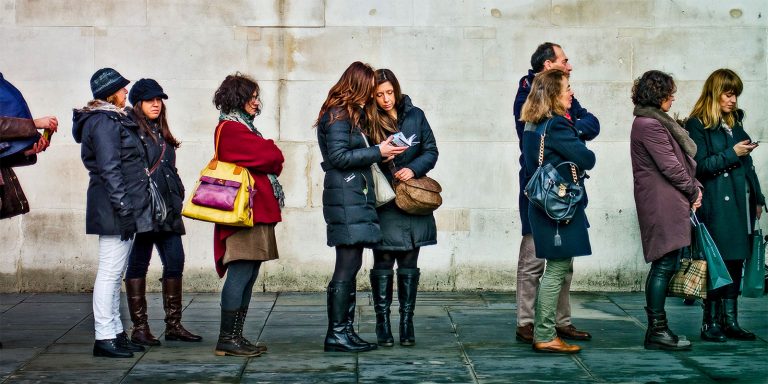 How long before we get frustrated at people talking in movies, a blind date who hasn’t shown up and more.

I vacillate wildly between being a patient and impatient person. I don’t like honking at other drivers because I hate being honked at myself and refuse to be hypocritical. So I will stoically wait while another driver finishes sending that text even though the light’s switched to green. But when my Internet hiccups or a YouTube video lags for even a second, I’m ready to storm the Verizon headquarters with router whose antennae I’ve whittled into shivs.

I found this survey from Timex that asked people how long they were willing to wait for various annoyances before they reacted. (The reactions intuitively vary on the case specifics and do feature occasional confrontations, but never reach the level of “punch someone in the face.”) Some of the averages seem about right. Some seem several magnitudes of order off based on my experience.

This is the one result that seems least believable to me. FIFTY SECONDS waiting behind someone at a green light? From what I’ve observed (but, again, never participated in), it’s more like five seconds, maybe even less. And I don’t think that’s just an L.A. thing. What’s the friendliest city in the country? Minneapolis? Savannah? Charleston? Mayberry? There’s no way they’re waiting 50 seconds either.

By the way, while the mean amount of time people would wait to shhh someone in a theater is almost two minutes, the median in the survey was considerably shorter — just 26 seconds. Which indicates to me a lot of people said “I’d do it in five seconds” but a few also said “Is it a two-hour movie? In that case, two hours and one minute.”

It takes almost three minutes before someone gives some parents a dirty look because their baby is screaming. That was the only reaction they tested in the survey; they didn’t ask people how long they’d wait to ask a flight attendant if they can switch seats when they realize they’re in direct proximity to a screaming baby. That would have to be in the 30-second range, right?

Assuming your boss is average, you can get away with consistently being four minutes late without catching any grief. And your boss IS average. Everyone’s boss is average. (How do I know that? Draw a bell curve, place a bunch of different jobs on the curve, and decide where “middle manager” should go.)

I think this only covers the time you wait in the initial waiting room, not the time you spend waiting after your official Doctor’s Office Tease. That is, of course, when the nurses bring you into a room in the back and you think you’re finally going to get to see the doctor… but you have to wait at least 15 more minutes. And unlike the initial wait, this time there are no magazines… but there is a big sign warning you that if you use your cellphone you’re going to make all the machines explode and probably kill someone.

I always gear up for an insane airport security wait but I haven’t had a truly bad one in years. And with that, I have now hubrised my way into missing my next flight. Is knocking on particle board a good enough jinx breaker?

7 | Waiting for your significant other to get ready – 21 minutes

I assume that means 21 minutes after you’re done getting ready. And I agree that’s too long to wait. I mean… who can’t get ready in 24 minutes?

8 | Waiting in line at Starbucks – 7 minutes

This one also seems pretty long. Maybe from entering the store to getting your coffee. But just waiting in a line? Not during rush hour where people generally know what they’re doing. Could happen around 2:00 P.M. when the amateurs are in there asking questions about the scones and all the baristas have neck tattoos. (Unlike the morning rush, when only 75 percent of the baristas have neck tattoos.)

That seems like the right amount of time for you to live that scene from about 46 percent of romantic comedies where the main character is sitting at a table, checking their watch or phone (depending on the era), and takes their cue to exit from the waiter passing by and patronizingly asking, “More bread?”

10 | Someone loudly talking on a cellphone to quiet down – 2 minutes, 25 seconds

Rather than ask them to quiet down, just make facial expressions to let them know you’re listening. Like really exaggerated, improv-y facial expressions. Because luckily, loud phone talkers always seem to loathe eavesdropping.

This one seems a little high. There aren’t that many cases where being early or exactly on time is do-or-die, but a job interview feels like one that is. Still, I guess if you squeeze in just past the two-minute mark you might even be able to pull off an excuse that helps you get hired like, “I was mesmerized by the architecture of the building and had to take a photo” or “My disability made me two minutes late. That’s right, I said disability. Try not hiring me NOW.”