From watermelon to green tea to something called Shure-Bert, the strangest variations of Oreos I’ve seen.

My lady went out a few weeks ago and bought some limited-edition Reese’s Peanut Butter Cup Oreos. They were glorious. I thought perhaps they were a sign that after experimenting with all sorts of weird flavors, Nabisco had finally figured out how to make Oreo variants that were actually delicious. Kind of like Jenny finally recognizing the goodness of Forrest Gump after all those years of extremely iffy choices.

Then, yesterday, I saw that the newest limited-edition Oreos are… Limeade Oreos. The streak of must-have variants stops at one.

That sent me off searching through the history of random Oreos to put together this list of the strangest flavors of Oreos ever made. Here are the 11 stand outs… 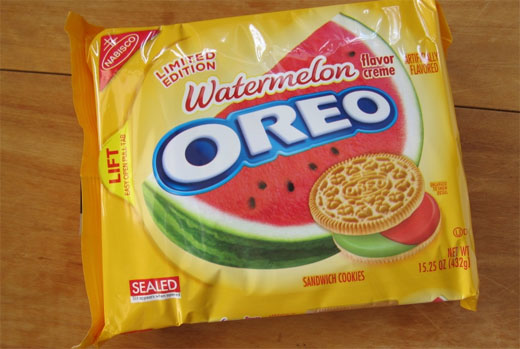 There’s something incongruously unappetizing about the phrase “watermelon flavor creme.” Each of those three words adds to a queasy overtone. Watermelon is not a flavor that plays well with others. 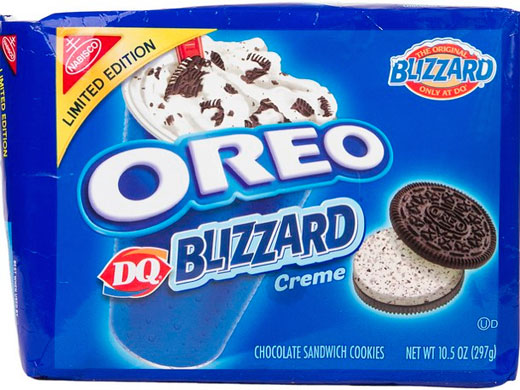 I love the Oreo Blizzard at Dairy Queen; I’ve ordered far too many in my life. But I don’t really understand the need to take an Oreo Blizzard, turn it into a creme and shove that back between two Oreos. It’s like how Taco Bell made Doritos Locos Tacos… then Doritos ended up making Doritos Locos Tacos flavored Doritos. Food recipes should not come from a hall of mirrors. 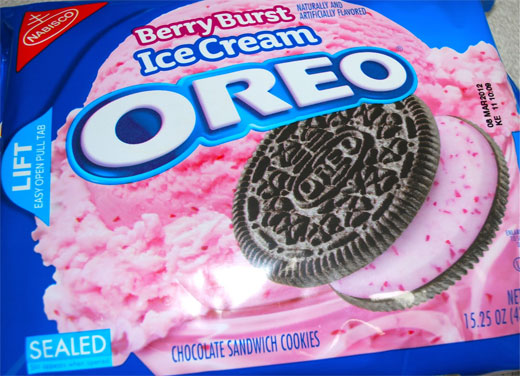 I’m assuming it’s strawberry, but it’s weird they left it somewhat ambiguous by just saying “Berry Burst.” That makes me think it’s got so many artificial flavors in it they can’t legally compare it to a specific fruit. 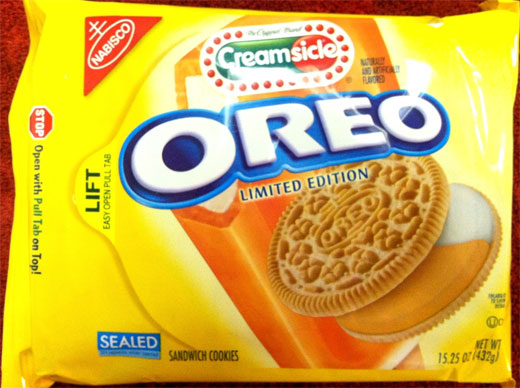 This is a rare case of anti-synergy, where the whole seems way worse than either of its parts. Creamsicle Oreos are lobster stuffed with tacos or wearing a leopard print Snuggie under a tuxedo. 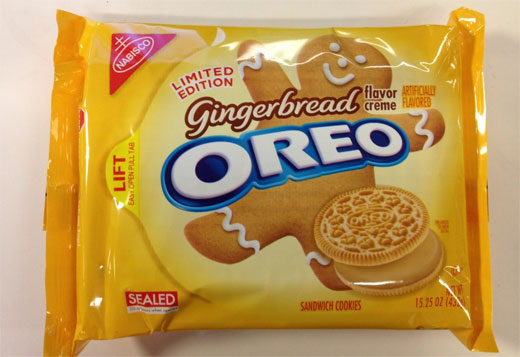 These are probably the most appealing on this list, but they still don’t quite work for me. Gingerbread is meant to be the cookie, not the filling. Had it been two gingerbread-flavored Oreo cookies with the usual creme filling, that might be really good. As it stands, it’s just kind of phoned it. You can tell it was half-hearted, too — that gingerbread man on the packaging looks like lazy clip art. 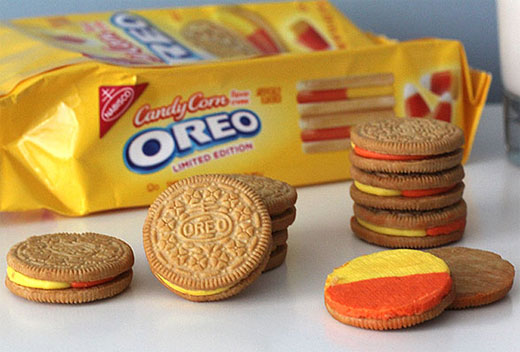 Candy corn is such a polarizing candy that it divides the potential customer base in half, and putting it in Oreos then re-divides the remaining fans into people who think these look good. The subset of people who ultimately wanted these had to be tiny. Candy Corn Oreos are essentially The Cleveland Show of cookies. 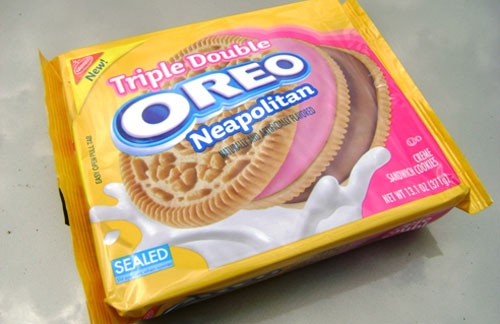 These look so disappointing. Even the picture of the strawberry and chocolate filling looks weak; you see they felt the need to jazz up their genericness with that sexy milk splash. I love Oreos, but I feel like I’d try one bite of one of these and decide it’s not worth eating. 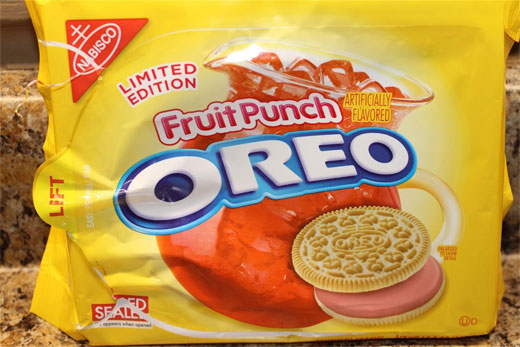 This feels like an even worse mix than the watermelon with vanilla. At least watermelon is loosely based on a real fruit. 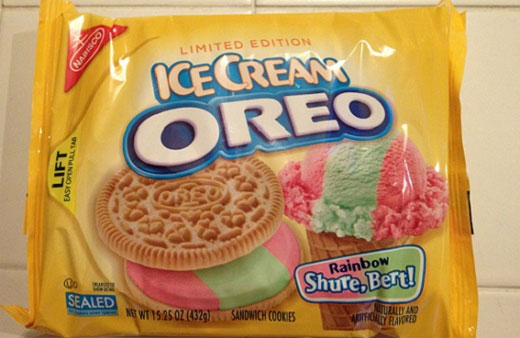 Ignoring for a second that rainbow sherbet wouldn’t taste good on an Oreo — why “Shure, Bert”? Are they trying to dumb it down? And is awkwardly obfuscating the word “sherbet” really dumbing this down or does it just make everything more baffling? Things like this are maddening to me, because I know companies spend fortunes on market research and testing. “Shure, Bert” must’ve passed through dozens of marketing meetings, focus groups and layers of bureaucracy — yet it’s an idiotic name for an unappealing cookie. 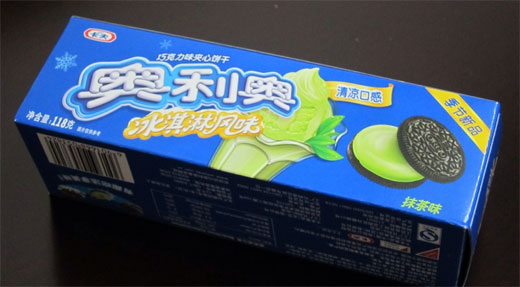 These only came out in China and Japan, but were still weird enough they had to make this list. I feel like the green tea thing kinda came and went here in the U.S. The phase is over. We’ve moved on to other random foods like kale and quinoa. Not to give Nabisco any ideas. 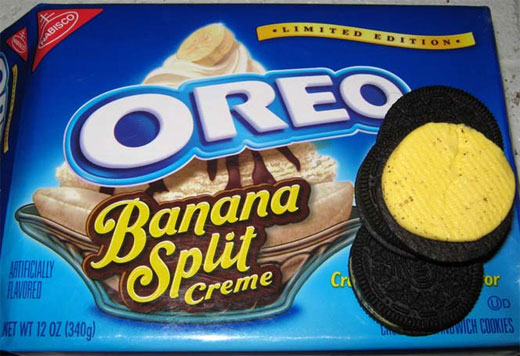 These are not to be confused with Banana Split Oreos which, of course, also came out at some point. I went with these because the filling is pure banana. These are banana cookies. The later Banana Split (not creme) Oreos adjusted and also added half strawberry filling. Not saying that would be a giant improvement, but based on everything I’ve learned making this list, if Nabisco course-corrects a flavor because it was too unpleasant even for THEM, clearly something was super wrong.

There Used to Be Celery Jell-O? The 11 Strangest Discontinued Jell-O Flavors

11 Musical Acts Most Likely to Use “Measure Twice, Cut Once” as a Metaphor for Love