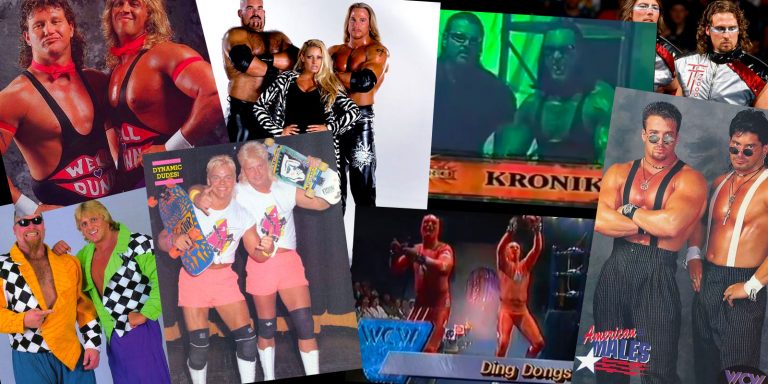 The WWE recently introduced a new tag team with a laughably bad name. They… um… have a history of awful names from the ’80s and ’90s.

The backlash against that embarrassing rebranding (one that sounded more like an unpopular ride at EPCOT than a championship-caliber team of badasses) was so stark that Vince McMahon did something he never does, even in the face of overwhelming evidence: Tacitly admitting one of his decisions wasn’t 100 percent pure, infallible genius. The following week, the tag team came out again, now known as the Viking Raiders. That’s still not great — and having four different names in the span of a couple of years is rough — but it’s better than Viking Experience.

That being said, there would’ve been a certain cache to sticking with the Viking Experience. With that albatross of a name, the team could’ve joined the long, long list of horrible tag teams names in pro wrestling history.

For this 11 Points, I decided to go back through the ’80s and ’90s and find some of the tag team names of the past that, more or less, doomed each team right out of the gate.

The Dynamic Dudes wasn’t necessarily a terrible name — if it had been ironic. Unfortunately, it wasn’t. The Dynamic Dudes weren’t parodying the ’80s culture of being a surfer/skater/Poochie. They were presented as genuine, enthusiastic participants in it.

The name High Energy didn’t scream “future champions” or, really, future anything. It was just a way of taking two smaller, more athletic wrestlers and combining them into a team that would always lose. (And, apparently, loved playing checkers so much they’d even play on their clothes?) It was one of many, many awful gimmicks the WWF would stick on Owen Hart through his tragically short career.

And on the subject of bad Owen Hart gimmicks featuring checkerboard-patterned attire, here’s the New Foundation. There’s an adage that nothing that’s the “New” version of something works in wrestling and, by in large, that’s true. (See: New Midnight Express, New Blackjacks, New Rockers, et. al.) But the New Foundation had the worst name of all.

Ostensibly it was a “new” version of the legendary Hart Foundation, featuring Neidhart and Owen’s brother Bret. But by replacing the word “Hart” with “New,” you get “New Foundation” — which, when you take a step back, you realize has no logical meaning. And this tag team never got the chance to accomplish a fraction of what the Old Foundation did.

The powers-that-be in the WWF’s Attitude Era never — and I mean never — met a sophomoric sexual pun they didn’t eventually take to air. So when someone over there realized they could combine wrestlers named Test and Albert into a tag team called T&A — and pair them with the buxom-for-days Trish Stratus as their valet to help sell the double entendre — it was more or less carved in stone that this team would come to be.

I feel like 1994 was way too late in the evolution of society to still package Samoan wrestlers as primitive and uncivilized. (I mean, really, it was never ok to do it, but it was notably not ok by the time we hit the ’90s.)

Another one from the WWF Attitude braintrust here. What better way to show a female tag team is angry and man-hating than to call them PMS? (Clearly, the writers worked backwards from the acronym to come up with “Pretty Mean Sisters.”)

Yes, that’s KroniK bookended with capital Ks, like a palindrome that isn’t. The name was an effort to be edgy, because, I don’t know if you know this, but “chronic” is a slang term for marijuana. And words that start with “K” are edgier than words that start with “C.” With that logic, it’s a mystery why KroniK never took off.

The American Males were created to be, essentially, Chippendales under another name. But would any fan really buy a t-shirt with two oiled up dudes that said “American Males” on it? I doubt it — but then again, someone bought that 8×10 that I found on the Internet to use to show these guys.

The Ding Dongs were created to be a kid-friendly tag team. Their outfits were covered in bells. No one, apparently, realized people might look at a team of guys covered in head-to-toe Spandex and think of another definition of the word “dongs.” They lasted less than three months.

Everything about this tag team name screams “old people trying to think of something cool.” Having the “2000” on the end does give me a nice burst of early-to-mid ’90s nostalgia though, back when we were slapping “2000” on everything.

There’s nothing like coming up with a terrible, terrible pun — and then changing the wrestlers’ names to fit that pun. But, yes, these two guys got their shot in the WWF and had to become Well and Dunn for the sake of their awful tag team name. Oh… and then wear fluorescent bowties and singlets with giant sets of lips on them.

11 Pro Wrestling Moves That Require the Greatest Suspension of Disbelief