Indiana is a true political battleground for the one cause the Religious Right has been pushing so hard for years: Muslim men not having to shave their beards.

I’m sick and tired of hearing about how Indiana’s Religious Freedom Restoration Act is anti-gay. That’s TOTALLY not the point. It’s really about the one cause that the Religious Right has been fighting for decades now: The right of Muslim men to have beards.

Here’s what Daniel O. Conkle, a professor at Indiana University’s law school, wrote in an op-ed piece in the Indianapolis Star:

The bill has little to do with same-sex marriage and everything to do with religious freedom. The bill would establish a general legal standard, the “compelling interest” test, for evaluating laws and governmental practices that impose substantial burdens on the exercise of religion.

Applying this test, a unanimous U.S. Supreme Court recently ruled that a Muslim prisoner was free to practice his faith by wearing a half-inch beard that posed no risk to prison security.

Now you see why I called you idiots? This has NOTHING TO DO with businesses wanting to be allowed to refuse services to gays. It’s all about the beards.

Now, I’ll admit. Until the RFRA hit the news, I had no idea that the Religious Right cared so much about Muslim men’s right to bear beards. But I don’t watch the news that much. (I prefer to be shouted at by homeless people or surly waitresses.) Turns out, their big concern over the past decade is that liberals are tearing the country apart by forcing Muslims to shave their beards.

You know those liberals. The darlings of the mainstream media. They hate beards. They hate how all the staunchly conservative hipsters, artists, hippies and celebrities have them. You always see liberals walking up to people and being all like, “Hey, shave that beard, you terrorist.” It’s awful.

Then along came Indiana’s RFRA, a glimmer of hope in a pro-shaving world. The governor and its proponents said it “mirrors” the federal RFRA and the RFRAs in other states (even the one your heathen hero Bill Clinton once signed), but that’s not really true. This RFRA is so much better. All those other ones only cover situations where the government is infringing on a person’s religious beliefs; Indiana’s covers any situation where a person, small business or corporation feels another person, small business, or corporation is infringing on their religious beliefs. Forget the government, this is mano-a-mano “don’t tread on me,” baby.

Imagine the possibilities without this law. Before, a Muslim guy could walk into a barber shop and they could demand to trim his beard and there’s nothing he could do about it but let them. A business could refuse to let a Muslim guy buy some turnips because of his beard and he’d have to walk away without those turnips — now he can sue. ZZ Top could be banned from playing a concert since their beards might show they’re Muslims, and they’d have to go elsewhere.

THAT’S why so many of Indiana’s pro-beard lobbyists came together to request — nay, demand — this bill. 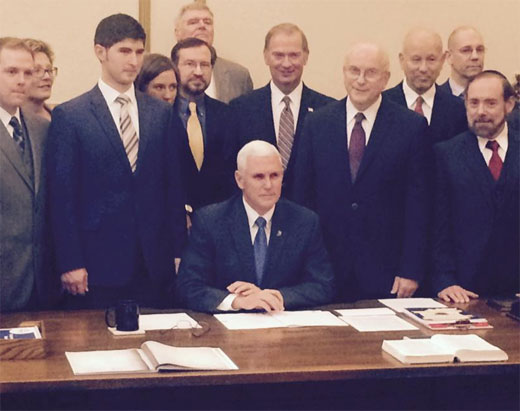 Look at this photo from when Indiana Governor Mike Pence signed the bill into a law. There are three guys behind him who have devoted their lives to making sure Muslims can have beards and this was finally their big day.

That guy over Governor Pence’s left shoulder looking directly at the camera is Eric Miller. He’s the executive director of Advance America. I Googled “Advance America” and all I got were a bunch of payday loan companies. But then I Googled it harder and found out it’s a conservative Christian lobbying group that is a leading force in Indiana’s pro-Muslim movement. (I know, I know, that sentence is redundant. All conservative Christian lobbying groups are vehemently pro-Muslim.)

The guy to his right with — fittingly — the beard is Micah Clark. He’s the head of the American Family Association of Indiana. Six years ago, he went to bat to stop a lesbian girl from wearing a tuxedo to her high school prom. I don’t know the context, but I have to assume it’s because he and his organization believe the only right way to wear a tuxedo is with a sweet beard.

And finally, the guy peeking his head over the top behind him is Curt Smith, the president of the Indiana Family Institute. I kinda spaced out when I was reading over his website, but he compared bestiality to… something. I forget what. Probably shaving a beard. You know how the ceremonial trimming of each other’s beards is a big part of men having sex with animals, after all.

Look. You liberals keep shouting about how Muslim men should have to shave their beards and clearly, people are listening. Plenty of major public figures and businesses have denounced Indiana’s law because they don’t want to do business in a state that would force Muslim men to cut off their beards.

But I say: They’re forgetting the lessons of the past. Remember the South in the Reconstruction Era? They passed all sorts of voting laws like literacy tests and grandfather clauses and everyone was all, “Oh, you’re SO clearly just doing this to discriminate against black people,” and they were all like, “Naw, bro, we’re just trying to make sure people who vote are well-informed and qualified. But we don’t know what’s going to happen. Could it wind up turning out bad for black people? Maybe. But we totally promise that’s not why we made the laws.”

And they were right. The laws did pretty much exclusively wind up discriminating against black people, but that was just an unfortunate side effect of progress. It’s why those laws still exist today. We misjudged them, just like we’re misjudging the people behind Indiana’s Religious Freedom Restoration Act. It’s like we learned nothing from the progressive lawmakers of the South. If they all hadn’t died of cholera at age 31, I bet they’d stand up today and join this fight to stop the liberals who want to force Muslim men to shave their beards.

I mean, who wouldn’t want to be on the right side of history again?

11 Things The Bible Bans, But You Do Anyway