One of them was the 1997 World Series. The other is much harder to explain.

The Cleveland Indians play in the World Series tomorrow for the first time in 19 years. And, consequently, I’ve been transported back to their last World Series appearance, in 1997, which ended in a mess. (Game 7, 9th inning lead, blown save, extra innings loss to, of all teams, the mercenary Marlins.)

And that takes me back to the two times in my life I’ve cried over sports. Neither makes a ton of sense in retrospect — random crying jags rarely do — but, thanks to the current Indians run, this seems like a fine time to dive in and analyze them. 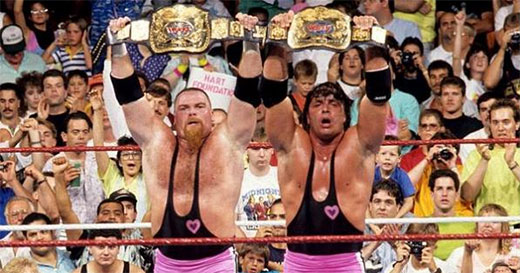 Yeah, the first time in my life I cried over sports was because of professional wrestling. That’s not… um… traditional.

I got into sports, including wrestling, later than a lot of the other kids. My parents weren’t big sports fans, I didn’t have older siblings, and I was into things like books and video games. Sports didn’t particularly get me going one way or another. That changed when, around age eight, I unpredictably announced to my parents I was now into sports. I had my mom sign me up little league and began trying to immerse myself in sports the way any academically-inclined kid would: By reading about them. I plowed through dozens of young adult sports novels and, in the process, became acclimated with the rules and such.

(Perhaps if I’d gotten into them earlier, the Cleveland Browns’ legendary failures would’ve drawn tears from my elementary school eyes. But I only have vague memories of watching the Browns botch those games and no particular memories of any emotional response. I wasn’t that invested.)

Wrestling came about a year into my self-declared sports fandom. All of my elementary school friends watched wrestling; it was the late ’80s, so it was sort of the law. I was hanging out at my friend Zach’s house one Sunday in the summer of 1989 when a bunch of the other kids came over to watch a big WWF event called SummerSlam. I decided to watch it with them. The first match was a tag team match between the Hart Foundation and the Brainbusters. One of the members of the Hart Foundation was a guy named Bret Hart. The second I saw him wrestling, I was hooked. He wasn’t like Hulk Hogan or Andre the Giant; the other pro wrestling that I’d seen to that point. He was fluid and elegant and athletic. He told a story with his wrestling that grabbed you and drew you in. I was hooked. (And, basically, have been hooked ever since.)

Over the course of the next year, I became obsessed. I watched wrestling on Saturday mornings, I subscribed to WWF Magazine, I immersed myself in all things pro wrestling, I got a Bret Hart t-shirt and trademark sunglasses from my parents as a gift. And — here’s that “how a nerdy 10-year-old does it” thing rearing its head again — I became active on a Usenet wrestling bulletin board. Since my family didn’t have a modem, I would go to the public library, log on to the precursor to the Internet via an account I established with the local Case Western Reserve University, and stand at the terminal for hours reading inside information about wrestling.

In other words, wrestling mattered to me. And Bret Hart mattered to me, which was tough, because he wasn’t exactly a normal pick for favorite wrestler in 1989. The other kids would tease me about it (they had such great taste with Hulk Hogan and the Ultimate Warrior).

So when SummerSlam 1990 came around and the Hart Foundation were challenging Demolition for the tag team titles, the outcome carried quite a bit of weight in my pubescent emotional wellbeing.

I watched the pay-per-view at my friend Harlan’s house. And when the underdog Hart Foundation won the championships in a thrilling, tense, exhilarating match, I remember Harlan, his brother and I running through his house yelling.

Only I wasn’t just yelling. I was also crying tears of joy. And that made August 27th, 1990 the first time I cried over sports. “Sports entertainment,” to throw Vince McMahon a bone. He deserves a non-employee actually using that term in exchange for giving me such a monumental life moment. 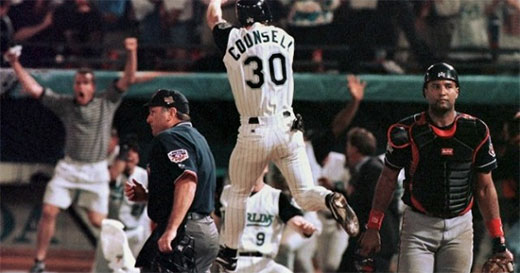 The Indians have always been my number one team, above the Cavs and expansion Browns. The team’s spectacular run in 1995 sealed it. After they lost in the World Series to Atlanta that year, I was upset but not devastated. Naively, I expected they’d just be back. But when 1996 featured some regular season struggles and ended with an ignoble early playoff exit, I learned that the World Series is never a given.

The Indians’ 1997 run was an odd one for me, as it happened during the first quarter of my freshman year of college. That meant I couldn’t/didn’t watch every single game along the way like I had in ’95. I remember lying in my bed in my dorm room during one ALCS game, studying for a history midterm the next day (I assume it was the next day, since that was always my cue to start studying) and taking breaks to check the rudimentary ESPN gamecast. The Indians made an epic late innings comeback against the Orioles that night.

When they made the World Series, I still didn’t have a chance to watch every game — but nothing was going to stop me from watching Game 7. I watched in a lounge in the dorm along with a few dorm friends. I remember there was a girl there who was also from Cleveland. I remember my elevated heart rate. I remember going into the ninth inning with a lead and I remember Jose Mesa blowing it. I remember watching the Indians flounder in extra innings and feeling that sense of foreboding. And I remember when the Marlins won that game. (I also remember when the Marlins ownership blew up that team like six hours later as an extra slap in the face, but that’s not really what this is about.)

And I remember going back to my room, getting into my bed and letting out a few tears. Now, those tears weren’t purely sports related; a combination of factors were at play. I still wasn’t super happy at or totally adjusted to college at that point. I was going through a lot of the stereotypical college freshman emotional roller coaster stuff. There was even a bit of homesickness smattered in there. In other words, I was decently fragile, and seeing my favorite team lose in such a heartbreaking way just pushed everything a little too far.

And that was it. Almost 19 years ago to this day, I cried over sports for the last time.

Regardless of what happens at this World Series, I won’t cry. I’m long past that and, as I described in my essay after the Cavs won the championship earlier this year, I have a very healthy relationship with sports and their place in life. (And, yes, Cleveland getting its title greatly softens any future blows from championship losses.)

Still, I’ll be pulling like a madman for the Indians to win. I’ll still have that elevated heart rate that only the methodical, every-pitch-could-change-the-game style of baseball can create.

And while it won’t make me cry, I may cry over sports again one day, but in a very different scenario: Maybe my son will win a championship and I’ll cry tears of joy.