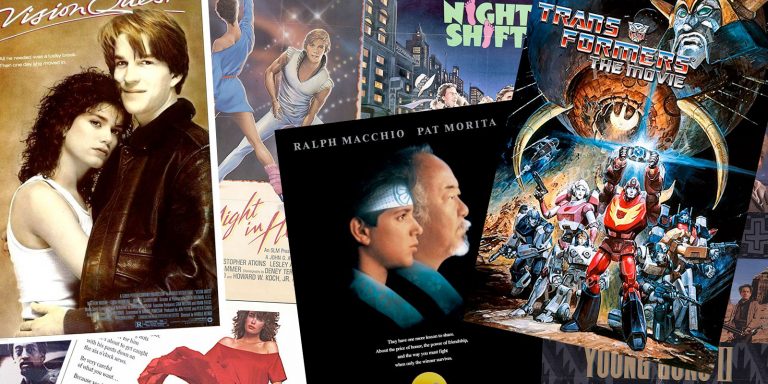 A list of very famous songs from mostly obscure movies of the 1980s.

A few years back, I wrote about 11 songs that transcended the movies they came from. I had a lot of songs that didn’t make the cut that time, so now, with the launch of my weekly newsletter The Retro (modern perspectives on ’80s and ’90s pop culture! — please subscribe), I wanted to revisit the concept and get more granular with it.

So… this week, I have 11 songs from ’80s movie soundtracks that went on to far more fame and success than the movies that inspired them. I set up a few rules for the sake of integrity/because I inexplicably enjoy raising the degree of difficulty on myself:

Anyway, based on mostly sticking to those rules, here are 11 songs that originally appeared on movie soundtracks in the 1980s that went on to achieve far more success than the films from whence they came.

Originally from: Against All Odds (1984)

I had no idea there was a movie called Against All Odds, let alone that Phil Collins wrote the title track for it, but this movie is an actual thing. (And appears to be in the “bodice-ripping” romance novel genre.) According to the internet, Jeff Bridges stars as a “down-and-out athlete” cut by his professional football team. Rather than joining the FBI and going after some surfer/bank robbers, instead he takes a payout from a crooked mobster to track down said mobster’s girlfriend. When Jeff Bridges finds the girlfriend in Mexico, they fall in love and then, I assume, the mobster is not thrilled.

The film came and went without much fanfare, but the soundtrack was dead ass. Phil Collins’ title track was hit first number one hit, and earned him two Grammys and an Oscar nomination. The soundtrack also featured originals from Stevie Nicks, Peter Gabriel, Big Country, and Kid Creole & The Coconuts.

2 | Wind Beneath My Winds by Bette Midler

Beaches is in the rare “melo-dramady” genre, and starred Barbara Hershey, like all movies from the ’80s. It also starred Bette Midler as a famous singer and actress and — back to that whole melodrama aspect — features Wind Beneath My Wings.

Beaches performed relatively well commercially — I hadn’t ever heard of about half the movies on this list, and I’d certainly heard of and even watched Beaches — but the critics sniffed it out as being an emotional snuff film and buried it.

Meanwhile, Wind Beneath My Wings won two Grammys and was Bette Midler’s only number one hit.

One more note: One of Bette Midler’s other biggest hits, The Rose, was also written for a movie it would outshine. The movie was The Rose, from 1979, so it technically didn’t qualify for this list.

3 | On the Road Again by Willie Nelson

I can’t believe it Willie Nelson only released On the Road Again in 1980 — it feels like a song that’s been around since 1953 — but it turns out that’s when it was released.

Willie Nelson wrote and recorded On the Road Again for the movie Honeysuckle Rose — a movie that also starred Nelson as an aging musician.

While Honeysuckle Rose was just a blip on the radar, On the Road Again was nominated for an Oscar and was his biggest pop hit in the U.S. to that point in his long, long, long career. (Always on My Mind would chart higher two years later; nothing would surpass those two.)

A Night in Heaven was a movie about a college professor who cheats on her nerdly rocket scientist husband with a stereotypical a-hole jock (slash male stripper, as they really played up in the promotional poster above) from her class. I’ve never seen it — shocking! — but, by all accounts, it’s even worse than that description makes it sound. The movie was a box office bomb and a critical nightmare.

But… its soundtrack featured Heaven by Bryan Adams. The song would not hit the Billboard charts off the soundtrack — it seems the movie had a reverse Midas touch on everything — but became a major hit when Bryan Adams also included it on his album, Reckless, the following year.

The soundtrack to A Night in Heaven also featured the original version of the song Obsession, which would also go on to be a hit when it was recorded by Animotion the following year.

White Nights sounds like a fascinating movie (well, the fact that it was greenlit is fascinating) — it’s the story of two male dancers in the Soviet Union, using their dance as part of a plot to escape. It starred Mikhail Baryshnikov and Gregory Hines, which is also just such inspired casting, plus Helen Mirren and Isabella Rossellini.

Anyway, it was a modest success, struggling to overcome some of the more fundamental absurdities endemic in the plot. But its soundtrack featured Lionel Richie’s Say You, Say Me, along with Phil Collins’ Separate Lives. Say You, Say Me won the Oscar and Golden Globe for Best Original Song and even made Billboard‘s all-time Hot 100 list (covering 1958 to 2018) in 94th place.

The Woman in Red is a romantic comedy with Gene Wilder where he farcically capers about as he’s wont to do. The movie, however, hung its hat on Kelly LeBrock recreating the Marilyn Monroe skirt-and-grate scene.

The nuts and bolts of the movie are fairly immaterial here; I Just Called to Say I Love You easily transcended it and established a much broader and stronger legacy. The song was a number one hit, won the Oscar and Golden Globe for best original song, and was, remarkably, Stevie Wonder’s best-selling single to date.

7 | That’s What Friends Are For, originally by Rod Stewart

Night Shift was a comedy where Michael Keaton and Henry Winkler played coworkers at a morgue. A few years back, I remember stumbling onto the movie on some streaming service and thinking it sounded like a great idea for an ’80s romp company. It was not. I have few memories from that recent viewing of the movie, but all of them were me feeling let down.

Meanwhile, the soundtrack featured the first recording of That’s What Friends Are For. This version was recorded by Rod Stewart. The song would go on to be a massive hit a few years later when it was covered by Dionne Warwick — but still, its roots remain in Night Shift. Which definitely qualifies as the “bad times” when it needed its friends by its side forevermore.

Yes, Jon Bon Jovi, not just Bon Jovi sans Jon. Blaze of Glory was a solo project by Jon for Young Guns II and eventually became the lead track of Jon Bon Jovi’s debut solo album. It was also his only number one hit as a solo artist. That paragraph was made 70x more confusing by his band being called Bon Jovi. I wonder if this is what will happen when Gerald Bon Iver decides to go solo.

Anyway, Young Guns II is more memorable than a lot of the movies on this list. But it was also the FIFTY-NINTH movie made about Billy the Kid (seriously) so, yeah, it feels less essential than Jon Bon Jovi’s song. (That being said, I can’t accurately tally how many songs called Blaze of Glory came out before 1988. Let’s assume it was fewer than 58.)

9 | Crazy for You by Madonna

Vision Quest was Madonna’s first movie, although it was more of a cameo than her later movie roles. I feel like I thought Vision Quest was a very different movie than it actually was — apparently it’s about a high school wrestler who culturally appropriates a vision quest to lose 30 pounds but then gives up his high school wrestling dreams because he falls in love with an older woman. Maybe they should’ve spent more time focusing on Madonna.

(For what it’s worth, the international releases did; the movie was called Crazy for You overseas.)

10 | Glory of Love by Peter Cetera

The Karate Kid Part II, sadly, missed the mark. It was going to be a hell of a challenge, but it fell into many of the classic sequel traps and missed the spirit and energy of its predecessor. (It was, to its credit, better than any subsequent movie in the Karate Kid cinematic universe.)

Glory of Love, however, hit its mark. It kicked off — and was the peak of — Peter Cetera’s post Chicago career. It was nominated for all the same awards as many of the songs on this list (Oscar, Golden Globe, Grammy) and was a number one hit.

Originally from: The Transformers: The Movie (1986)

Important note: This song was not nominated for an Oscar.

11 Songs About Different Amounts of Time, From Shortest to Longest, Part One

11 Songs About Different Amounts of Time, From Shortest to Longest, Part Two