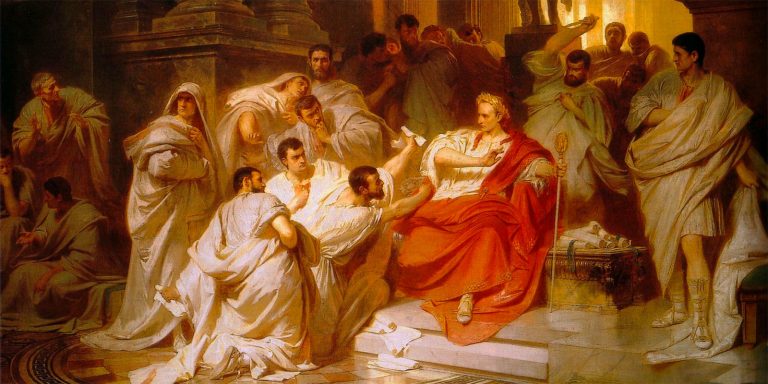 March 15th is a notorious day. Is that reputation deserved? Here are some of the worst things that have happened on this day throughout history.

Two years ago, I posted a list of 11 Wonderful Things That Have Happened On the Ides of March. This year, I’m doing the follow-up (which, logically, should’ve come first).

If you’re not an English teacher, Shakespeare aficionado, trivia person, or a fan of forgettable George Clooney movies, the Ides of March is March 15th — and is kind of a once-a-year Friday the 13th. The Ides of March became infamous thanks to Shakespeare’s Julius Caesar. Caesar is warned by a soothsayer to “beware the Ides of March.” Well, March 15th rolled around, he neglected to beware packs of knife-wielding acquaintances and was stabbed to death.

The Ides of March is supposed to be a cursed day… but I had to dig a bit to come up with the 11 items for this list. Here are 11 very bad things that have happened on the Ides of March. Check ’em out…

Obviously. There wouldn’t be an Ides of March if it wasn’t for Caesar. He’s kind of the Lou Gehrig’s disease of this date.

There’s a reason you don’t hear about battles like the Battle of Guilford Courthouse in history class. Completely shatters the narrative of America being the scrappy, outmanned — yet non-defeatable — underdog. The Ides of March are all about ruining narratives.

Except, perhaps, Shakespeare’s narrative. The Ides of March kinda helped him get his over big.

This marked the Bolsheviks taking over. And once Nikolai Volkoff, Boris Zhukov and the rest of the Bolsheviks were in there, butchering the national anthem, defeating the British Bulldogs, and advocating communism — well, that was the end of Russia as they knew it. Consult your copy of the 1997 animated film Anastasia or WWF Coliseum Home Videos from the late ’80s and early ’90s for more information.

You can’t make a “worst of this day in history” list without including something about Hitler. It’s like writing a story about the rise of female comedy and not mentioning Tina Fey, Lena Dunham and Mindy Kaling. I don’t want the police to revoke my “cliche” card.

Was this the inspiration for the Minnesota-based Dairy Queen corporation’s creation of the Blizzard? History says… no, absolutely not. I’m not so sure. I ask questions.

You’d THINK this was a good thing. Without rock and roll music on television to corrupt the American youth, this should’ve ushered in an era of chaste obedience. Unfortunately, by this time, the youth had already discovered doing drugs and banging each other… so all this did was end a cultural institution.

This ended the old school era of different sports teams in the same city having the same nickname. It also led to the end of football in Los Angeles when, six years later, the Rams just couldn’t resist the glitz and glamour of St. Louis.

The Star Wars legacy and mystique has faded over the years… but this still shouldn’t have happened. Titanic just goosed the box office because everyone had to see it twice — once to experience it, and a second time so you could fully analyze whether there was room for both of them on that piece of driftwood.

(Spoiler alert: There was. Spoiler alert two: The old woman’s necklace was eventually recovered by some dude and given to Britney Spears.)

Remember SARS? It had a little bit of everything we fear — mysterious symptoms, mysterious origins, Chinese conspiracy theories, a vague acronym. It ended up killing 775 people worldwide (and four in the U.S.) Less deadly than AIDS or SIDS, arguably equally deadly to KISS.

I wonder if that gang of hos is still waiting for him over there on the curb?

My choices came down to this or the start of the British-Tibetan War of 1888. I stand by my decision.

11 Wonderful Things That Have Happened on the Ides of March