11 Companies That Surprisingly Collaborated With the Nazis 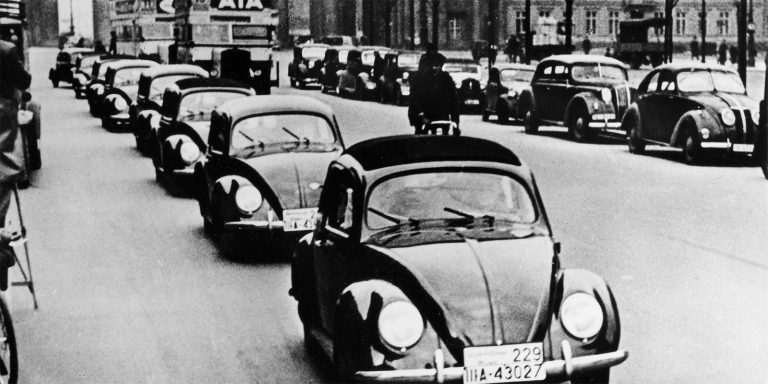 It’s amazing how many companies that are still around today complicitly worked with Nazi Germany during World War II and the Holocaust.

I saw this article today; it’s about a controversy over the German insurance company Allianz buying the naming rights to the new New York Giants and Jets football stadium.

That’s controversial because Allianz has very famous Nazi ties — they insured Auschwitz, their CEO was one of Hitler’s advisers, and, during the Holocaust, instead of paying life insurance benefits to Jews, they sent that money straight to the Nazis.

Jewish groups don’t want Allianz getting the naming rights to the new Meadowlands. Abe Foxman, the head of the Anti-Defanation League, says, quote, “It would be an insult. It’s putting their name in lights for generations to come.”

Since World War Two ended, Allianz has officially apologized for its role in the Holocaust and has paid several million dollars in restitution. Which brings me to a larger point here: At what point should we say to Nazi collaborating companies, “OK. You’ve apologized, you’ve paid, none of your current employees worked with the Nazis, it’s time to move on”?

Because there are a TON of companies that worked with the Nazis. Way more than the Allianz and the other 11 I’m about to talk about here. They’ve all apologized. A lot have paid restitution. Two generations have passed.

That’s up to you. I’m just puttin’ the information out there. Here are 11 companies that you may not realize collaborated with the Nazis.

During World War Two, Kodak’s German branch used slave laborers from concentration camps. Several of their other European branches did heavy business with the Nazi government.

And Wilhelm Keppler, one of Hitler’s top economic advisers, had deep ties in Kodak. When Nazism began, Keppler advised Kodak and several other U.S. companies that they’d benefit by firing all of their Jewish employees. (Source: The Nation)

In the 1930s, Hugo Boss started making Nazi uniforms. The reason: Hugo Boss himself had joined the Nazi party, and got a contract to make the Hitler Youth, storm trooper and SS uniforms.

That was a huge boon for Hugo Boss… he got the contract just eight years after founding his company… and that infusion of business helped take the company to another level.

The Nazi uniform manufacturing went so well that Hugo Boss ended up needing to bring in slave laborers in Poland and France to help out at the factory.

In 1997, Hugo’s son, Siegfried Boss, told an Austrian news magazine, “Of course my father belonged to the Nazi party. But who didn’t belong back then?” (Source: New York Times)

Ferdinand Porsche, the man behind Volkswagen and Porsche, met with Hitler in 1934, to discuss the creation of a “people’s car.” (That’s the English translation of Volkswagen.)

Hitler told Porsche to make the car with a streamlined shape, “like a beetle.” And that’s the genesis of the Volkswagen Beetle… it wasn’t just designed for the Nazis, Hitler NAMED it.

During World War Two, it’s believed that as many as four out of every five workers at Volkswagen’s plants were slave laborers. Ferdinand Porsche even had a direct connection to Heinrich Himmler, one of the leaders of the SS, to directly request slaves from Auschwitz. (Source: The Straight Dope)

During the Holocaust, a German company called IG Farben manufactured the Zyklon B gas used in the Nazi gas chambers. They also funded and helped with Josef Mengele’s torture “experiments” on concentration camp prisoners.

IG Farben is the company that turned the single largest profit from work with the Nazis. After the War, the company was broken up. Bayer was one of its divisions, and went on to become its own company.

Oh… and aspirin was founded by a Bayer employee, Arthur Eichengrun. But Eichengrun was Jewish, and Bayer didn’t want to admit that a Jewish guy created the one product that keeps their company in business. So, to this day, Bayer officially gives credit to Felix Hoffman, a nice Aryan man, for inventing aspirin. (Source: Alliance for Human Research Protection, Pharmaceutical Achievers)

Siemens took slave laborers during the Holocaust and had them help construct the gas chambers that would kill them and their families. Good people over there.

Siemens also has the single biggest post-Holocaust moment of insensitivity of any of the companies on this list. In 2001, they tried to trademark the word “Zyklon” (which means “cyclone” in German) to become the name a new line of products… including a line of gas ovens.

Zyklon, of course, being the name of the poison gas used in their gas chambers during the Holocaust.

A week later, after several watchdog groups appropriately freaked out, Siemens withdrew the application. They said they never drew the connection between the Zyklon B gas used during the Holocaust and their proposed Zyklon line of products. (Source: BBC)

Coke played both sides during World War Two… they supported the American troops but also kept making soda for the Nazis. Then, in 1941, the German branch of Coke ran out of syrup, and couldn’t get any from America because of wartime restrictions.

So they invented a new drink, specifically for the Nazis: A fruit-flavored soda called Fanta.

That’s right: Long before Fanta was associated with a bunch of exotic women singing a god-awful jingle, it was the unofficial drink of Nazi Germany. (Source: New Statesman)

Henry Ford is a pretty legendary anti-Semite, so this makes sense. He was Hitler’s most famous foreign backer. On his 75th birthday, in 1938, Ford received a Nazi medal, designed for “distinguished foreigners.”

He profiteered off both sides of the War — he was producing vehicles for the Nazis AND for the Allies.

I’m wondering if, in a completely misguided piece of logic, Allianz points to the Detroit Lions giving Ford the naming rights to their stadium as a reason why they should get the rights to the Meadowlands. (Source: Reformed Theology)

The Luftwaffe needed tetraethyl lead gas in order to get their planes off the ground. Standard Oil was one of only three companies that could manufacture that type of fuel. So they did.

Without them, the German air force never could’ve even gotten their planes off the ground.

When Standard Oil was dissolved as a monopoly, it led to ExxonMobil, Chevron and BP, all of which are still around today. (But fortunately, their parent company’s past decision to make incredible profits off of war have not carried on.) (Source: MIT’s Thistle)

A lot of banks sided with the Nazis during World War Two. Chase is the most prominent.

IBM custom-build machines for the Nazis that they could use to track everything… from oil supplies to train schedules into death camps to Jewish bank accounts to individual Holocaust victims themselves.

In September of 1939, when Germany invaded Poland, the New York Times reported that three million Jews were going to be “immediately removed” from Poland and were likely going to be “exterminat[ed].”

IBM’s reaction? An internal memo saying that, due to that “situation”, they really needed to step up production on high-speed alphabetizing equipment. (Source: CNet)

Bertelsmann still owns and operates several companies. I picked Random House because they drew controversy in 1997 when they decided to expand the definition of Nazi in Webster’s Dictionary.

Eleven years ago, they added the colloquial, softened definition of “a person who is fanatically dedicated to or seeks to control a specified activity, practice, etc.” (Think “Soup Nazi.”)

The Anti-Defamation League called that expanded definition offensive… especially when added by a company with Nazi ties… they said it, quote, “trivializes and denies the murderous intent and actions of the Nazi regime… it also cheapens the language by allowing people to reach for a quick word fix… [and] lends a helping hand to those whose aim is to prove that the Nazis were really not such terrible people.” (Source: New York Observer, ADL)

11 Super Sexy Products — For Your Dog

11 Famous Men Who Were Beat Down by Their Women