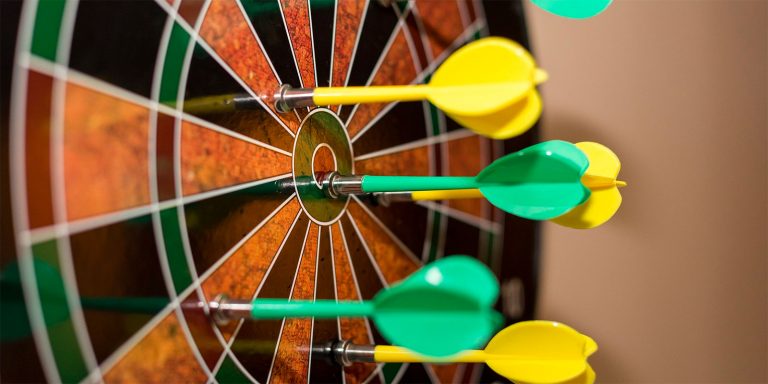 Pool, darts, Photo Hunt and so many more games to test your semi-drunk skill.

I was at a bar last night that had skee-ball. I’ve never given that much thought to skee-ball. Every few years, sure, I find myself playing a few rounds. I have a few good throws, a few bad throws, collect the prize tickets from the machine, and debate whether to give them to a little kid to make his day or selfishly cash them in for a Chinese finger trap.

Last night I didn’t play skee-ball, but I did watch a guy who was, unequivocally, the best skee-ball player I’ve ever seen. He wasn’t aiming for the holes in the middle. He was aiming for that little cylinder in the top-right corner that gives you 100,000 points. And he was hitting it about 80 percent of the time. I’d bet my enormous collection of Chinese finger traps he was a ringer. A skee-ball ringer.

And he’s my inspiration for this list. I brainstormed 11 of the most common games I’ve seen at bars and ranked them by the amount of skill it takes to competently participate. Not to beat a ringer, but to hold your own against your average friend or the average stranger. We’ll start with least difficult and move on up…

I’m a big fan of Photo Hunt. NOT Naked Photo Hunt. I prefer spotting the differences between two photos of the French Riviera or a plate of Italian food than spotting extra nipples Photoshopped onto women from a 1989 issue of Penthouse. But Photo Hunt takes no discernible experience or skill. Anyone can just walk on up and jam in a finger. Much like if they were on set for those ’80s Penthouse photo shoots.

Before seeing a ringer last night, I’d never known anyone who was any good at skee-ball. If it’s not even the hardest game at Chuck-E-Cheese (because Whack-a-Chuck is obviously tougher), it’s not the hardest game for adults either.

The good thing about shuffleboard is anyone can basically step in and slide the pucks across the sandy table with some degree of competence. While they can’t do the superstar knockout combo moves or intentionally stick a puck halfway over the back edge, they can, at the very least, keep the pucks from going two feet then flopping off the side. I, personally, take a great deal of pride in my shuffleboard playing. It’s why I think I would start playing in an adult curling league if I ever moved to Canada. (Odds: Seventeen million-to-one.)

It doesn’t take that much skill as long as you’ve got a really talented partner. We call that the John Oates Principle.

Pop-a-Shot is definitely my favorite bar game. It’s also the absolute best form of basketball for people who loved the game but never had the height/athleticism/height/talent/height to play it for real. Shooting five-foot free throws with miniature balls? I’m like the King and Duck of that.

Unless you’re at a bar with Sylvester Stallone, arm wrestling in a bar is less contingent on technique and more contingent on “who’s got the right ratio of arm strength to sobriety to win.”

It’s fun to play darts, but they’re tough. You can probably scrape together some entertaining games with friends, but if you ever play any strangers — especially ones with either Irish accents — they will destroy you.

I wasn’t exactly sure where to put bar trivia on the list because it has wild swings from easy to difficult. Like, in the same round, they’ll ask, “Who was the prime minister of Mauritania in 1927?” and “What color are pumpkins?” So I think it lands properly here. You’ll always be able to answer a certain critical mass of questions and be completely dumbfounded on others.

Golden Tee has a decent learning curve. It also has the ability to scrape an entire layer of skin off your palm. The challenge for any rookie is: Will you achieve competitive competence before the roller ball ravages your fragile palm skin?

No one ever seems to get better at air hockey. Mostly you just fling the puck around until someone lets their guard down enough times to lose. It’s like football’s prevent defense in table form. And nothing good comes of being associated with the prevent defense. Nothing.

Pool is a graceful game. Most of us do not play it with any discernable grace. I generally try to avoid playing pool at a bar… because I’m terrible, like everyone else. So the games takes forever, at least one passerby gets impaled with an erratic pool cue, and the games are more likely to end on a scratch on the 8-ball than on someone successfully sinking it. And as we know, if you’re not immediately good at something, it’s not worth doing.