Your food is made with more bugs, arm hair and lube than you realize. Since you assume it’s none. And it’s not.

There have been a lot of stories in the news lately about what’s really in our food. Mostly because of this stuff nicknamed “pink slime” that apparently made up a decent amount of fast food and grocery store ground beef. The picture of it is so damning. It’s more damning than the photos of Rumsfeld-Saddam, Oscar de la Hoya in fishnets, or the Barry Bonds head expansion. 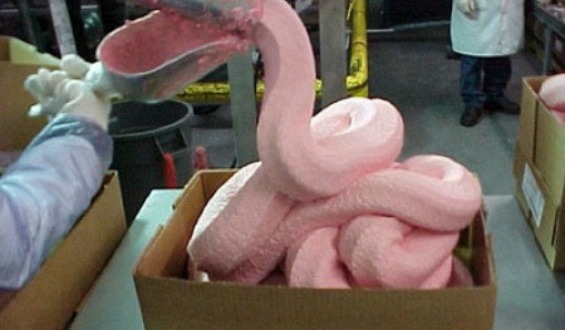 That prompted me to pull this list out of my ideas section and actually write it up. There are a few other lists of hidden food ingredients out there — most of which are just plagiarizing the same list over and over — so I dug around for some rarer ones.

Here’s my list of 11 horrifying (and sometimes sexy) ingredients hidden in popular foods. Which, of course, won’t make any of us stop eating any of them.

Propylene glycerol is used in some bagged salads and fast food salads to keep the lettuce green and fresh. It’s also a key ingredient in Astroglide and other lubes. And hey — if you follow the Kanye workout plan, both salad and lube will be part of your daily life. And you’ll ride a plane.

Man, this was just a taint’s length away from being beaver-squared.

Castoreum is made from the secretions that come from the castor sacs in beaver’s anuses… with a dash of beaver urine thrown in as well. Castoreum is used in most vanilla and raspberry flavorings (and also to flavor some cigarettes). It’s listed in ingredients as “natural flavoring.”

When you buy gourmet cheese, it’s hand-mixed. The cheesemakers dig their bare arms deep into the barrel of cheese. Their arms are hairy — and that’s not just a shot at the French. Everyone everywhere has hairy arms.

This was a popular one this week too — Starbucks admitted the red coloring in their strawberry frappuccinos comes from ground-up cochineal beetles. And that makes it so the drinks aren’t vegan. But they say it’s better than using chemicals, because at least beetles are all-natural. That’s really the Scylla and Charybdis of eating processed foods, huh? Chemicals or insects? (“Neither” is not an option.)

Several beers use an ingredient called isinglass, which is made from dried fish bladders. Primarily cod. It’s used to make beer finer and clearer . . . but also makes some beers technically non-vegetarian. Beers that use fish bladders are mostly British; popular ones include Bass, Boddington’s, Foster’s, Guinness, Newcastle and Stella Artois.

McDonald’s pies (and also several breads) use an ingredient called L-cysteine, 80 percent of which is derived from duck feathers. It can also be derived from human hair, but apparently McDonald’s sticks to the duck feathers. Now, there are several steps between duck feathers and your first bite into an apple pie — but they’re still connected. (It’s like how there are several steps between a cow and one of their hamburgers. Still connected, but only as distant cousins.)

The Twinkie ingredients say it’s made with vegetable and/or animal shortening containing beef fat. So there’s a chance your Twinkie has beef in it and a chance it doesn’t. There’s also a chance it contains insect parts — maybe the traces of cockroach contribute to its ability to survive a nuclear blast?

Think about this when you’re at Chipotle. Barbacoa isn’t just shredded from the normal parts of the cow. It comes from the entire cow. Including its face. Especially the face. I read a few sources that said the face provides the best barbacoa meat. Anyway, no time to slowly debate whether to eat it now. The line is growing behind you and the woman standing by the salsas, cheese and sour cream is already getting ready to yell at you.

I’m actually not sure which of those two ingredients is less appealing.

Wendy’s uses silicon dioxide (aka sand) as an anti-caking agent in the chili. They use the day-old burgers to add meat to the chili, and because their square shape precludes them from being used as hockey pucks. (I may’ve made that last part up.)

Several wines, sodas and juices contain a preservative and anti-fungal agent called methylparaben that originates in a female dog’s vagina when she’s in heat. So, in theory, if you’re drinking a glass of wine and your dog jumps up on your lap, there’s an outside chance he’s detecting a whiff of the methylparaben and it’s getting him ready to go.

Adding all this up, if you go to a restaurant and order a salad, a glass of wine and a vanilla bean creme brulee, you could be consuming lube, dog vagina and beaver anus in one sitting. Have an excellent lunch.