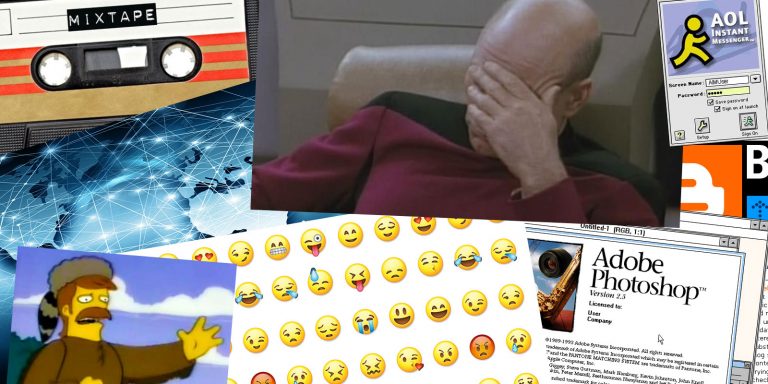 The ’90s brought us hundreds of words we use today, some focused on technology, others focused on the random evolution of pop culture.

Back in May, I wrote about the 11 best new words born each year in the ’80s. I used a tool from my sometimes rival Merriam-Webster’s website called Time Traveler.

I thought today I’d hit the ’90s, which also brought us some words that are critical — critical, I say! — to our lives today.

Here are my picks for the words born each year of the 1990s that are the funniest, most significant, and/or most notable additions to the English language and our current vernacular.

Thoughts: World Wide Web would become the accessible entry point to the previously hardcore geeks only world of going online. I was one of those, by the way, despite being a little kid, I was using a 14.4k baud modem to access Usenet via the local engineering college. I was doing that roughly around 1990, too. I was also wearing tighty-whities, come to think of it.

Thoughts: Good job to Mike Myers getting “verklempt” into the dictionary here. I went with mixtape, though; even though cassettes were on the way out in 1991 (sort of, if my robust collection was any indication), the concept of a mixtape is enduring.

Thoughts: Adobe Photoshop was released in 1990, and within two years, it became a genercized term for photo editing. Which, to this day, Adobe HATES, by the way. I love their examples of how to properly use the word Photoshop. (Like, don’t say “That picture was Photoshopped,” say “That photo was edited using Adobe Photoshop Elements software.”) Been fighting that Sisyphean fight for 26 years and counting now, Adobe.

Thoughts: I need to take a quick 90-minute break to watch Booty Call. The best part is when the movie awkwardly jams in Jamie Foxx’s ability to do impressions by having Vivica A. Fox tell him it turns her on to hear someone impersonate powerful men. What a film. What a triumph.

Thoughts: I never really pinpointed 1994 as a moment when society totally changed, but the words listed above sure make it seem like a typhoon of cultural revolution touched land that year.

Thoughts: The term instant messaging came around in 1995, and within a year literally everyone I knew was doing it every single night. Give me those 500 hours, America Online, because I’ve got kids I never talk to in school who I absolutely must chat with online.

Thoughts: Facepalm may not have seemed like a major contribution to English at the time, but considering it’s the primary emotion of 2018, its origin deserves recognition. (Yes, even over embiggen. Pains me as a Simpsons fan, but I feel more facepalm-y than embiggened these days.)

Thoughts: Emoji wasn’t just added to the language, it went on to become a universal language. That being said, is smackdown the one and only word that WWF/WWE ever contributed to the global lexicon? (As much as they wish “sports entertainment” would be?)

Thoughts: Not a great year for new words. That being said, social networking was a world-alerting invention, so it wasn’t just a “well there aren’t a lot of choices, let’s go with something by default” pick.

Thoughts: One day I’ll have to sit my grandkids down and explain how, no really, blogging was cool back when I started doing it.

The 11 Funniest Words in the World, According to Science