11 Foibles, Wonks and Techno-bloopers That 11 Points Will Now Atone For 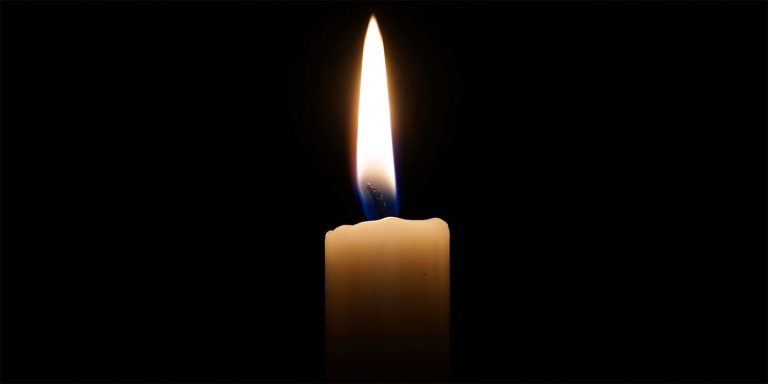 On Yom Kippur, I atone for some obtrusive ads, bad site design decisions and mean things I said about LeBron. Oh, and I defend why I called Webster’s Dictionary wrong.

Tonight is the beginning of the Jewish day of atonement, known to people in the industry as Yom Kippur.

I thought that would be a good time to whip together this quick list of things about this website that I would like to atone for. 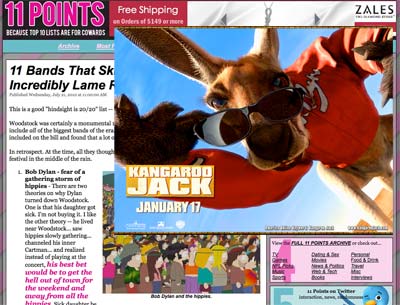 I’m proud to announce that the giant, unbearable Flash ads are officially gone. My deal with that advertiser ended and I chose not to renew. The days of having gigantic ads spring up over this site’s content are over for good. Will this make people more inclined to visit the site? I sure hope so. It’s going to make it so it takes 475 years worth of ad revenue for me to retire to the Caribbean instead of 415 years.

2 | A slight drop in the number of lists

My goal is always to publish three lists per week (four during weeks when I’m doing an NFL picks list). I usually hit it. Towards the end of the summer, I got extremely busy with another project and had to drop down to two a week. So I atone. And no, that’s not PR speak for “I went to rehab.” If I’d gone to rehab, you can bet there would’ve been lists like “11 Types Of People You Meet In Rehab” or “11 Reasons Why It’s Worst To Be A Chocoholic Than an Alcoholic.”

3 | A cobbled together pink and green web design

I let the previous design of this website go on for a bit too long. It was kind of Frankensteined together and ended up being a pink and green mess. Now the site is a pink and blue (slightly less of a) mess.

4 | The site not scrolling properly

Ever since I launched this redesign, there have been some issues for some people as they try to scroll through the site. While I still haven’t pinpointed why that happens (although I think it may have to do with the Yahoo Toolbar), as my atonement, I’m working on a simplified version of the site that should take care of the problem. That’s right. I atone via Cascading Style Sheets. 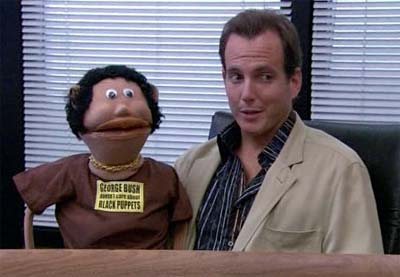 When I tell people about this site there are two major responses. One: “What will you do if someone starts 12 Points?” and two: “Is it ’11’ the number or ‘eleven’ the word?”

To the first question I respond: “I would wish him the best of luck and will attend his funeral when the grind of trying to come up with that many things drives him to hang himself by his neck in his f*cking closet.” To the second question I would respond: “The number.”

Until now. A few months ago, the owner of elevenpoints.com let the domain name expire. I ventured into the seedy, seedy world of after-market domain purchasing and managed to win an auction to get that name… for only about 10 times the price of a regular domain name. So now, ElevenPoints.com forwards to this website.

If you’ve ever e-mailed me, you’ve found this out. Basically, in the 50 or so hours a week I’ve allotted to this website, I haven’t ever properly squeezed in e-mail correspondence. But I always feel like if I could just get rid of the backlog I could start answering them better as they come. So… as part of my atonement I am going to respond to every e-mail I’ve ever gotten before the weekend is over. That’s right. There are going to be some people who wrote me questions in mid 2009 who should be thrilled to get the answers back. It’s like Ringo Starr and Marge Simpson, but on an exponentially less famous scale.

8 | NFL lists that seem to really bother some people

During football season, I publish my NFL picks lists every week. And these appear to make some select people legitimately angry. I’m not sure why — they don’t impact the frequency at which I post other lists, and, unless you’re in a very warped Clockwork Orange situation, reading them is purely optional — but the anger brews nonetheless. So I will atone for hurting people deeply by continuing to do the NFL picks that I so enjoy.

9 | Tons of potshots at LeBron 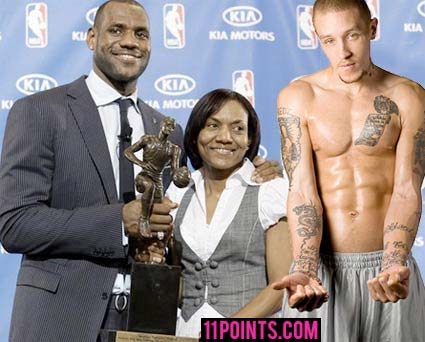 Ever since LeBron decided to go from being Shawn Michaels to being one of the Rockers, I’ve taken shots at him in about a dozen lists. A few select commenters have taken note and suggested that it’s time for me to get over it. And to that I say: NEVER. The tagline of this site references my dislike of cowards. It would be downright hypocritical of me not to wail on the man who is so cowardly that even Brendan Fraser, screaming at the top of his lungs, couldn’t sum up his cowardice.

But, in the spirit of the day, I’m going to go ahead and atone for all of the comments I’ve made in the past year, especially the entire list I devoted to 11 Strategies For Having Sex With Your Friend Or Teammate’s Mom. And pre-atone for all the things I’m going to say this year.

Much like the issue with the site scrolling, I still haven’t fully figured out why sometimes my e-mail list works perfectly… but sometimes it sends three e-mails to some people and zero to others. I’m probably at the point where I should pay for a real mailing list manager, and not just use the very, very rudimentary php script that I cobbled together one night and never looked at again. To atone, I will look into that. Also, if anyone knows a good e-mail list management tool that doesn’t require you to jam your mailings up with a bunch of their ads, I’d love to know about it.

In my much-read but extremely polarizing list 11 Little-Known Grammatical Errors That Will Shock and Horrify You, one of the errors I tackled was the word “collide.” I wrote:

For things to collide, they both have to be in motion. You can’t have a head-on collision with a pole — unless you’re talking about driving your car into someone named Kowalski.

(Yes, I just blockquoted myself. Whatever.)

Instantly, I got a flood of comments, e-mails, Tweets, Facebook messages and neighbors banging on my door. “You’re wrong, [insert synonym for idiot]! Go to Webster’s,” they said, “the example they give is ‘the car collided with a tree.’ I’ll happily trust Webster’s over some shitty blog.”

And my response was: Webster’s is wrong. They just didn’t know. It happens.

But I will atone, because I never backed that up. So now, I’ve taken the time to back it up by scanning in pages from the Bible of journalism, the AP Stylebook, and from a highly-respected grammar book called When Words Collide (fittingly).

Will those convince anyone? I don’t know. Do I feel super, duper atoned now? You betcha.

11 Points to Wrap Up the First Year of 11 Points

11 Follow-Ups From the First Six Months of 11 Points