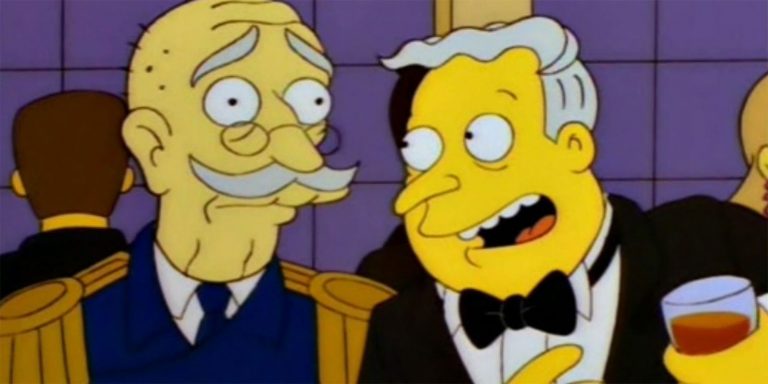 Characters that came and went for one glorious Simpsons episode, from Larry Burns to Frank Grimes.

Here are my 11 favorite one-off characters. That means they were in one episode and never featured again. (Sometimes characters make two-second cameos as jokes, those can appear on this list.) So… I didn’t include awesome characters who were supposed to be one-offs but then started recurring (like Disco Stu, Poochie, Johnny Tightlips, Lindsey Neagle, state comptroller Atkins or Duffman). After much, much research, here’s what I came up with… 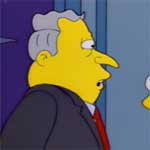 Arguably the best celebrity guest star role ever on The Simpsons. 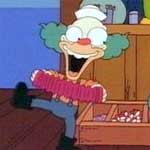 A great random throw away character. When Krusty allegedly dies, Bart and Lisa believe he’s still alive and show his picture (on the side of a balloon) to the Sea Captain.The Sea Captain recognizes him… but as Handsome Pete, a little guy (who looks like Krusty) and dances for nickels. He’s unexpected… funny… and never heard from again after his three-second cameo.

I think this moment also began my love of giving people the nickname “Handsome”… I just think it works so well. 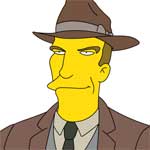 I absolutely love the prohibition episode, where Springfield bans alcohol and Homer becomes a bootlegger. (The episode also features one of the best Simpsons lines ever: Homer’s toast “To alcohol, the cause of… and solution to… all of life’s problems.”)

And, to make things even better, the man that Springfield brings in to stop the bootleggers is Rex Banner, an Untouchables-esque government agent. In the end, he winds up getting catapulted out of town (and ostensibly killed in the process)… but, for this one episode, there couldn’t have been a more perfect foil to Homer’s Beer Baron persona.

Banner is voiced by Dave Thomas, who I’ve loved in a lot of things (this role, Arrested Development and Rat Race instantly come to mind.) 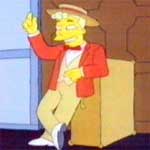 The Monorail episode is almost universally considered one of the top five Simpsons episodes ever, and Lyle Lanley is the central character to that episode. He’s a monorail salesman, straight out of The Music Man, who convinces the town to buy a monorail through songs and hucksterisms… even though, truthfully, it’s impractical, cheap and structurally deficient.

This is just one of the great Phil Hartman Simpsons roles (this one, Lionel Hutz and Troy McClure!), and Hartman’s patented comedic smarminess takes Lanley to an even higher level. 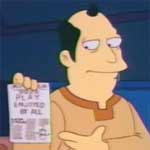 I don’t always dig Jon Lovitz, but I did here, where he was the director of the musical version of A Streetcar Named Desire.

I’m particularly partial to his line: “I am not an easy man to work for. While directing ‘Hats off to Channukah’, I reduced more than one cast member to tears. Did I expect too much from 4th graders? The review [holds up a school newspaper] ‘Play enjoyed by all’ speaks for itself.” 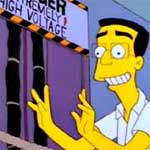 Frank Grimes took The Simpsons into one of the darkest places it’s gone. He’s an amazing counterpoint to Homer… probably the best one ever. Frank Grimes worked hard, slaved away at jobs while going to school at night and finally, through all that perseverance, finally got a moderately-paying job at the power plant. Meanwhile, Homer’s a complete idiot with a better job, better salary, a family, a Grammy and experience as an astronaut.

Ultimately, Grimes goes crazy because no one else will recognize Homer’s incompetence, and accidentally kills himself doing an impression of Homer touching high voltage wires.

It’s a very dark ending… and a very strong commentary on the connection between work, success, incompetence and luck in the modern American workplace. 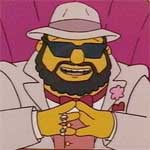 Big Daddy is a Cajun criminal, who shows up in The Simpsons Spinoff Showcase. For that episode, the writers made up three fake Simpsons spinoffs, parodying major TV show tropes including a cop show, a lame sitcom and a variety show.

The first spinoff is Chief Wiggum, P.I., where Chief Wiggum moves to New Orleans (after being kicked off the Springfield police force “for massive corruption”) to clean up the town. His rival is Big Daddy, who, in the episode, kidnaps Ralph Wiggum and steals the Louisiana governor’s mansion.

I love Big Daddy as a New Orleans master criminal and there’s something about Cajun accents that still hasn’t been completely mined comedically. 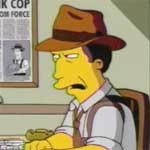 I’m a real sucker for people talking in antiquated lingo (as I talked about earlier in the Rex Banner point), and Dexter Colt does it perfectly. He’s the private investigator who Homer hired so he can learn more about Lisa. (The episode is fairly recent, called The Dad Who Knew Too Little, from season 14 in 2003.)

Dexter Colt is straight out of a black-and-white noir film, and uses words like “dame” and “gams”. Between that kind of dialogue and his storyline (tracking Lisa, then going after her and Homer for his payment), he completely makes the episode.

And, most important, almost all of his quotes in the episode are priceless (including the classic randomness of “From the moment you walked into my office I had a feeling I’d kill you in a Hall of Mirrors.”) 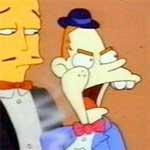 The Gabbo episode was a really smart one from the first Simpsons golden age.

A ventriloquist and his dummy (Gabbo) get a TV show opposite Krusty’s, and proceed to steal away his audience.

The Gabbo dummy doesn’t have that many quotably funny moments, but he’s perfect as the central character in a very, very strong episode. 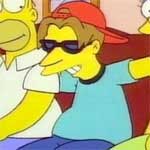 Roy’s a brilliant touch in the episode where the executives behind Itchy & Scratchy decide to add a new character to make things feel fresh. They end up picking the most bureaucratically “cool” character — Poochie, a dog with sunglasses who surfs and has a lot of attitude while being edgy-cute.

Meanwhile, without fanfare, throughout the episode, a guy named Roy just shows up with the Simpson family. And… he’s a “cool” guy with a backwards hat and sunglasses who says things like “How’s it hanging?”

It’s perfectly placed satire against creativity by bureaucracy and non-funny people interfering with the creative process. I’ll leave it at that. 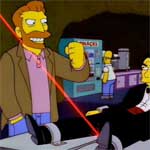 Although it’s not one of the most classic plots, I really like the episode where Homer transfers to a new company that’s run by Hank Scorpio… who turned out to be a world domination-obsessed Bond villain.

I’m not a fan of everything Albert Brooks does (and some of his Simpsons characters, like the self-help teacher who tells people to be like Bart, would make my worst one-off characters list)… but he nails this one. Scorpio is a great mix of supervillain and “everyone’s best friend” boss, and serves as a good point of comparison to Mr. Burns (who’s evil in a whole different, more direct way).