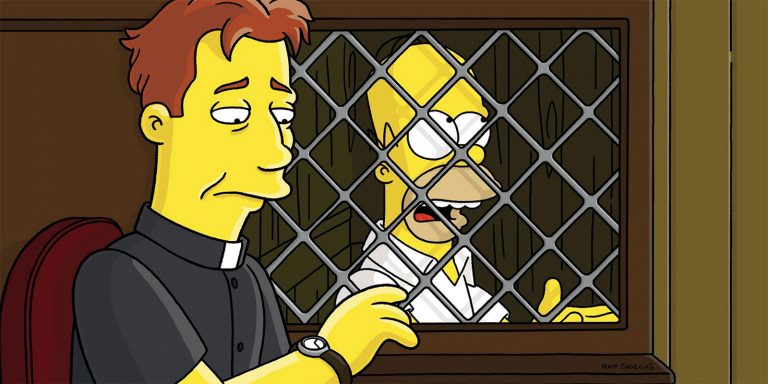 The ’90s was the Simpsons’ golden age, but there were some all-time classic episodes in the 2000s too.

The ’90s were the glory years for The Simpsons. Pretty much every single episode that’s in the discussion for “Best Simpsons Ever” happened last decade.

This decade is different. I’m one of the biggest Simpsons fans out there… yet as I was researching this list, reading over summaries of some of this decade’s episodes, I didn’t even recognize them. I know I’ve seen them. I’ve seen every single episode of the show at least once. After 400+ episodes… and the classic on constant syndication replay… my brain’s allotment for The Simpsons may actually be filled to capacity.

Putting together this list is interesting — as The Simpsons seemed to run short on great stories to tell, the gimmicky episodes began to get stronger and stronger. The list is also VERY early-2000s heavy… the most recent episode is one from 2006 and most come from 2000-2003.

But while this decade is clearly the post-golden age era of The Simpsons… it’s still managed to produce some absolute classics.

Plus, I submit to you: Even a past-its-prime Simpsons is still better than 99 percent of the other stuff on TV.

Here are the 11 best Simpsons episodes of the 2000s, plus some honorable mentions at the end. I structured each of these differently than I usually do — rather than write paragraphs about why these episodes are amazing, I just made sub-lists of the stories, jokes, quotes and cultural impact moments that made me love these episodes so much. 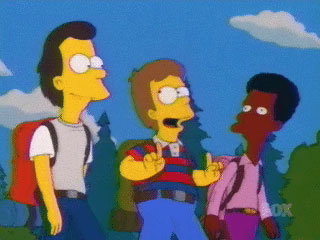 What I love: Marge’s fantasy about Burley leading to Homer pretending to be Chad Sexington … Marge liking a prank where nothing catches on fire … the entire sequence where Homer is hypnotized, from saying “Look at me, I’m a famous historian, out of my way!” to when he’s supposed to be Emily Dickinson but says “Look at me, I’m Angie Dickinson, out of my way!” … Homer screaming nonstop … young Carl talking about the future where there’ll be the internet — the inner netting to line swim trunks … all of the Stand By Me parallels … Homer repeatedly saying “The old quarry is just a stone’s throw away” … finding Mr. Burns’s “corpse hatch” and solving the mystery that the dead body is Waylon Smithers Sr. … and finally, Moe, having been excluded, finding his own clues to solve the mystery. 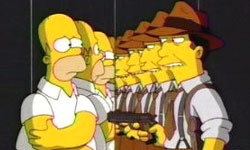 What I love: The Dexter Colt character (as I said on my 11 Best One-Off Simpsons Characters list) … making fun of lame mall cart videos … Girltech, a division of Boytech … Colt operating under the theory that Lisa was a vampire … Favorite Parent: Mom … when Dexter Colt interrogates Ralph Wiggum and declares “someone’s already worked this guy over” … and, of course, “From the moment you walked into my office I had a feeling I’d kill you in a Hall of Mirrors.” 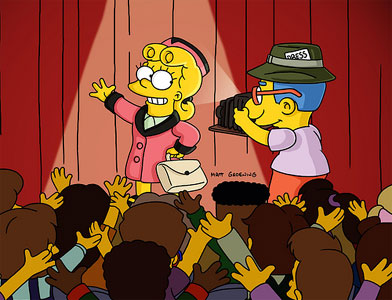 What I love: Of all the musical episodes of the decade, this one was the best parody and the best story … the failed casino night (and Saved by the Bell shout-out) … Nelson singing “I am Iron Man do do do do do do do vote for me!” … every single song … Willie doing a Milhouse impression in the teachers’ lounge … and, most importantly, the best Skinner-Chalmers scheming in the history of the show. 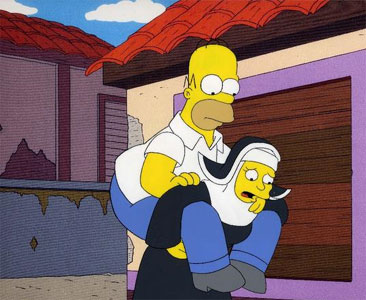 What I love: How much this episode pissed off the country of Brazil … Homer quoting “Now that’s what I call a moon shot” right after it’s said on Itchy and Scratchy but thinking it’s his own joke … Homer trying to fix the phone line … sexy Brazilian “kids” television … Homer asking if in the southern hemisphere “Hot snow falls up?” … Homer jumping in an unlicensed taxi then getting kidnapped … “Our money, it is so gay” … and Homer asking Moe for 50 grand, agreeing to pay Moe that much instead, then asking Flanders for 100 grand. 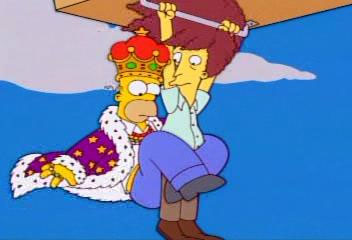 What I love: The best Sideshow Bob episode of the decade (just edging out “Day of the Jackanapes”) … a really good mystery as to who was trying to kill Homer … each prisoner being crazier than the last (and the final two needing to trade places) … fighting on stilts (and cops on stilts) … bringing back the Homer-Frank Grimes rivalry … Sideshow Bob taking advice given to him by Lenny … and, without a doubt, Sideshow Bob’s version of I’ve Grown Accustomed To Your Face. 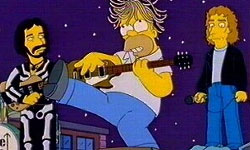 What I love: Phony McRingRing, the phone company mascot … Homer assuming the badger in the doghouse is “probably Milhouse” … Kent Brockman talking about golden showers … “area code camp” … Homer strapped with dynamite to protest … Homer trading the bottle of chloroform to see The Who … all of the callbacks to stuff from old episodes that made up the wall dividing the town … the low class New Springfield words like “Oh yeah” and “Come here a minute” … and, by far and away, Homer’s repeated difficulties with remembering to dial the correct area code and his exasperation that results. 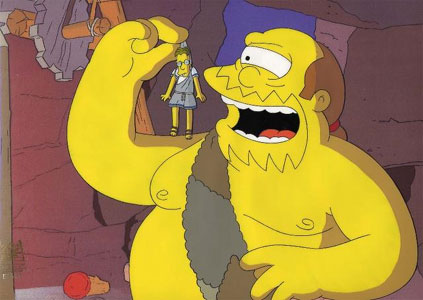 What I love: There were many “three stories” episodes of The Simpsons this decade and this was the strongest all around … Homer not reading to baby Bart because “Stuff kept coming up. Mostly car related.” … an incredible retelling of The Odyssey … the River Styx with Lady by Styx playing and Homer saying “This truly is hell!” … the English Army fighting Joan of Arc and the French, with quotes like “I thought we had a truce.” / “Just because you keep saying it doesn’t make it so.” … every single line Moe has during the Hamlet retelling … Rosencarl and Guildenlenny … and somehow tying it all in to Ghostbusters. 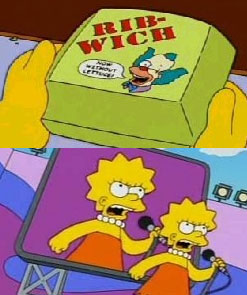 What I love: Both the A-story and B-story are strong — Lisa in the spelling championships and Homer following the Ribwich around the country … Krusty promising that the Ribwich contains “authentic, letter-graded meat” … Bart saying the first day of school is a total wank … Milhouse misspelling “choke” … Chalmers using Skinner in every example at the spelling bee … 3M and M&Ms merging to form, get this, Ultradyne Systems … the personification of the Seven Sisters colleges … everything with the late George Plimpton … the Grateful Dead-style Ribwich followers … “the boy who everybody likes” … and finally, Homer showing up to Lisa at the Spellympics and saying “Daddy made it for your dance recital, honey!” 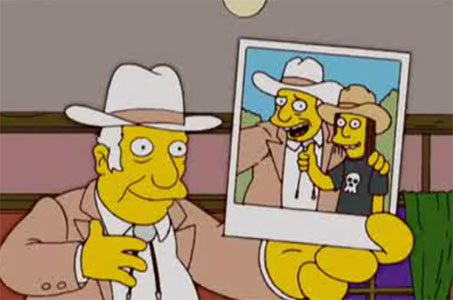 What I loved: Just edged out “Trilogy of Error” as the cleverest unique gimmick episode of the decade … each story-inside-a-story-inside-a-story made sense … Mr. Burns trying to get a photo with a smiling child and scaring them all off … Jimbo’s huge smile in the photo with the Rich Texan … the competition between Burns and the Rich Texan … the entire Moe/Edna storyline … Homer deducing what the Rich Texan was doing from his parody lyrics to Yellow Rose of Texas … the concept of a “Texas left” (it means “down”) … and finally, Moe bringing a baseball bat to a gun fight. 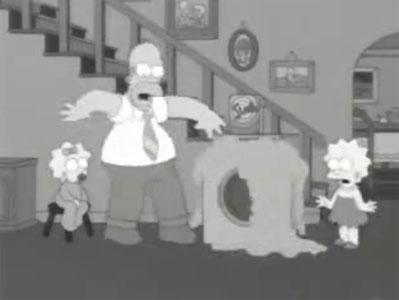 What I loved: Might be the only episode where almost every single line is a joke — AND a good one … Marge saying “They told us what to wear, how to dress, what clothes we should put on” … lumping in Home Improvement with made-up shows like Hollywood Hogwash and Sheriff Lowbrow … the entire mama mia! laundry short film that Homer shoots … “We were using $50 bills as toilet paper, and toilet paper as dog toilet paper” … “I want to set the record straight. I thought the cop was a prostitute” … reckless spending and interracial homoeroticism being part of volume one of Encyclopedia Self-Destructica … the fight over a song that “swings” or “rocks” at the Iowa State Fair … Homer in Rent II: Condo Fever … and finally, the episode referring to them as a “northern Kentucky family.” 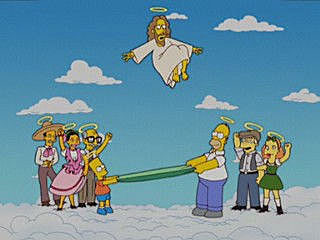 What I love: The best commentary on religion ever on The Simpsons (and that’s saying something) … Bart referring to Father Sean with the nickname “Irish” … Homer on celibacy: “Celibacy!? I was talking about the meat on Friday thing. Man, you guys got more crazy rules than Blockbuster Video” … Homer in confession: “I coveted the wife in Jaws 2, I lied to a watier, I masturbated eight billion times and have no plans to stop masturbating in the future. Woo hoo! I’m clean! In your face, Lord!” … Bart and Homer converting because the Catholics have “Boston, South America, the good part of Ireland, and we’re making serious inroads in Mozambique, baby” … Bart reminding everyone that Catholic, protestant, etc. are all part of the same religion and that “the little stupid differences are nothing compared to the big stupid similarities” … and, most importantly, the entry on my 11 Most Profound Quotes in Simpsons History list that’s one of the best commentaries on organized religion and zealotry ever: Reverend Lovejoy saying they’re going to bring Homer and Bart “back to the one true faith — the Western Branch of American Reform Presby-Lutheranism.”