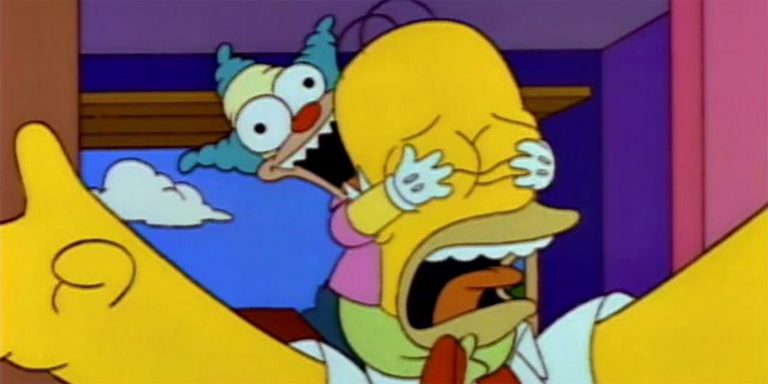 There have been 20 Treehouse of Horror episodes containing three stories each — here are the best 11.

This list was almost impossible to narrow down. With 60 total Treehouse of Horror segments to choose from (three stories per episode, 20 Treehouse of Horror episodes)… and my deep, passionate, more-than-merely-sexual love of The Simpsons… choosing just 11 caused a huge amount of internal struggle. But, in the end, I emerged with 11… and learned a little bit about myself too.

The good news: In the process, I ended up ranking all 60, in order. I’m going to send out that list exclusively to people who are subscribers to the 11 Points Mailing List on Halloween. So sign up now! (Yes, this is a very transparent grab for more subscribers. No, I don’t feel guilty about it.)

Here, in honor of Halloween, are the 11 best stories from annual Treehouse of Horror Simpsons episodes, in order.

This is the Sherlock Holmes-Jack the Ripper parody. Its highlights: A great scene in an opium den, Homer as the suspected mutton chop killer, the swords of Osirus (which Mr. Burns sold for opium, but wishes he could get back… to sell for more opium), and, of course, Chief Wiggum’s love of eel pie.

The best Treehouse of Horror stories are the ones that have a real beginning, middle and end crammed into seven minutes… plus good jokes, memorable scenes and unique twists. This is really the only story in recent memory that aces all of those elements.

Marge hits Ned Flanders and they try to cover up the murder… the episode turns into a parody of I Know What You Did Last Summer… and has a werewolf twist.

But the reason it vaulted into the top 11 was Homer singing about his Super Sugar Crisp cereal. “Can’t get enough of that Sugar Crisp”… and then, in the same tune, “Guess I forgot to put the fog lights in.” (Also, Ned Flanders making “record time on [his] fog walk” just does it for me on so many levels.)

Homer goes back in time and finds that changing one little thing can completely change the present. (He should’ve known this — it was his dad’s advice to him on his wedding night.) But when he changes things, he finds himself returning to different worlds, including a totalitarian world run by Ned Flanders, a world where it rains donuts (but no one knows the word “donut”), a world where his family eats with forked tongues and more.

It’s a good, innovative story with a solid ending — AND it features the brilliant, recurring “Willie takes an ax to the back” bit that happens in all three parts of Treehouse of Horror V.

There are three Treehouse of Horror stories that deal with Homer and the family taking on a world turned into zombies/mutants/etc. There’s this one, there’s “Dial ‘Z’ For Zombies” in season three, and there’s “Don’t Have a Cow, Mankind” from this current season.

And no, I don’t think that’s overselling it.

6 | “Nightmare on Evergreen Terrace” from Treehouse of Horror VI (1995)

This excellent, funny-from-start-to-finish Nightmare on Elm Street parody has Willie invading the dreams of the children of Springfield after their parents let him burn up at a PTA meeting. (He was just trying to adjust the thermostat — lousy Smarch weather and all.)

This one inexplicably starts with the Simpsons in Morocco and Homer buying a magical monkey’s paw that grants wishes. After many, many twists, it ends with Moe scaring the alien invaders away using a board with a nail in it.

Homer has a very quotable wish, which is useful anytime you order a turkey sandwich (“I don’t want any zombie turkeys, I don’t want to turn into a turkey myself”)… plus the whole concept of building a bigger board with a bigger nail is fantastically subtle commentary on mankind’s obsession with creating bigger and better weapons.

I can’t get enough of this story. So strange, so unexpected and so good. From Lenny’s night swimming and drinking with the dolphins… to Chief Wiggum blaming Lenny’s bottle nose bruises, blowhole burns and flipper prints on teenagers… to, especially, “the dolphins just wanted it more”… this story took a risk and it paid off huge. It’s easily the best Treehouse of Horror story of this decade.

This might just be the best political satire in Simpsons history. They’ve never quite matched the aggressive, no-holds-barred style that they channeled in this episode; their take on third party candidates… on the abortion debate… on the generic cliches that politicians spout off… and on the American election process in general are all just perfect.

In the process, the story has a great arc, an unbelievable amount of quotable moments and some of the funniest lines of any Treehouse of Horror. (“Abortions for all!”)

Homer in the ironic punishment division of hell eating all the donuts in the world remains one of the most iconic Simpsons moments ever. The trial for his soul… featuring Lionel Hutz, the Flanders devil and some of the most notorious people in history as the jury… is a well-done, fluid, brilliant story.

You just can’t beat it. The highlights: The parody of The Shining is the best of any Treehouse of Horror movie homage… “No TV and no beer make Homer something something”… Homer saying the wrong TV catchphrase as he bursts through different doors… and, finally, Willie taking an ax in the back.

Remember, if you want to see my list ranking all 60 Treehouse of Horror stories from best to worst, I’ll be sending it out to my e-mail list subscribers tomorrow. So sign up!