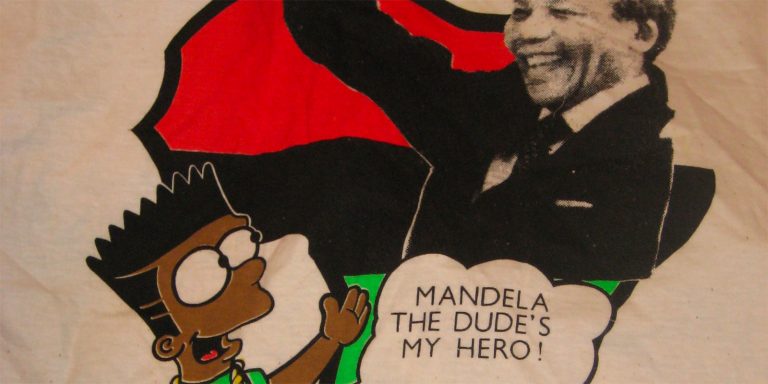 During Simpsons mania in the early ’90s, there was a trend of making Bart black and putting him on t-shirts. Here are some of the classics from that era.

Based on purely anecdotal evidence I’ve come to swear by as gospel, a large number of people who read this website were born after The Simpsons was already on the air (or were too young to remember the debut). You’ve never known a world without The Simpsons. Which means you also didn’t get to witness the Earth-shattering hype that surrounded the show during its first few seasons.

In the first few years of the ’90s, The Simpsons were everywhere. Everywhere. T-shirts featuring the Simpsons family members were especially popular. And Bart t-shirts were the most popular of all; when The Simpsons began, it was more about Bart than Homer. (That, obviously, changed quickly.)

The Bart Simpson mania led to two things. One, the “I Didn’t Do It” episode of The Simpsons. And two, an unexpected but ubiquitous wave of bootlegged t-shirts that featured a black Bart Simpson. Bart is really one of only four non-black guys who the black community has fervently declared to be an honorary black guy. (Scarface, Bill Clinton and the white rapper in Sister Act 2: Back In the Habit are the others.)

I’d forgotten all about the “Black Bart” era until recently, when I accidentally stumbled onto a photo of a Black Bart t-shirt while researching for another list. And once I found one, I immediately stopped researching the other list and went on an epic search for more t-shirts of Bart Simpson as a black guy. 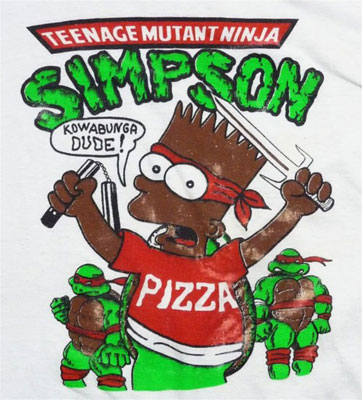 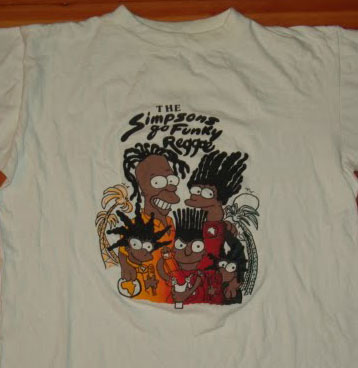 The whole family was brought in for this one. I like Lisa and Maggie going full Coolio (even if this shirt possibly predates Coolio)… and Homer’s balding dreadlocks are a nice touch too. 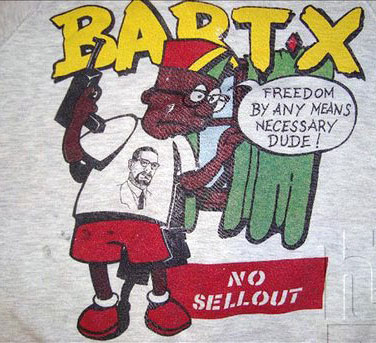 This shirt seems to be a crossover where the early ’90s Simpsons trend meets the early ’90s Malcolm X apparel trend. It’s also a bit more militant than your standard Bart bootleg. It’s more Spike Lee/Mars Blackmon than Bart Simpson in the face, but that gun is no joke. I am glad to see Bart keeping the King of England out of his face, though. 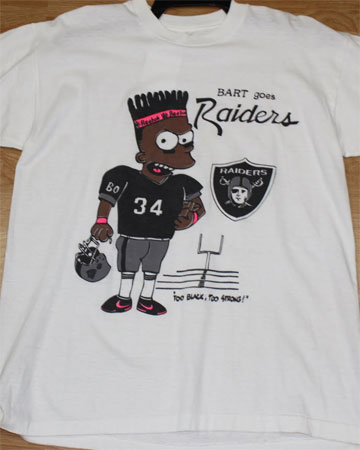 Thanks to, well, Ice Cube mostly, the early ’90s Los Angeles Raiders had the hottest logo of any team in sports. So it was only natural to have Bart step in for Bo Jackson. Seems like if they’d just had *one* brainstorming session though, someone would’ve realized “Bart goes Raiders” would be more thematically relevant as “Bart knows Raiders.” 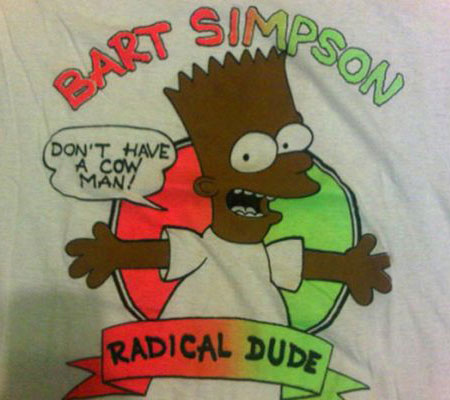 Unlike the rest of the shirts on the list, this one has Bart as a black guy apropos of nothing. He’s not on a sports team that’s popular in the black community, speaking for a black cause or standing in for a black musical artist. This was just a standard early-era Simpsons t-shirt with Bart as a black guy. Which, in a way, makes it the most confusing of all. 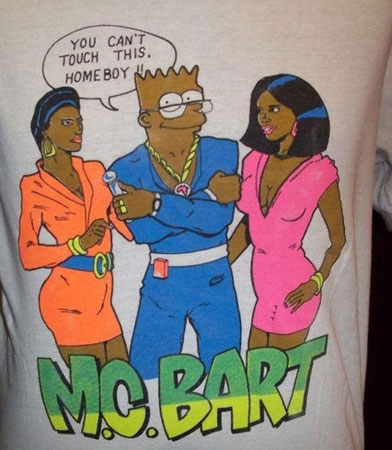 The illustration is a surprisingly good mashup of Bart and M.C. Hammer. Extra points for the pager. Demerits for him saying “You can’t touch this” while being touched by two people simultaneously. 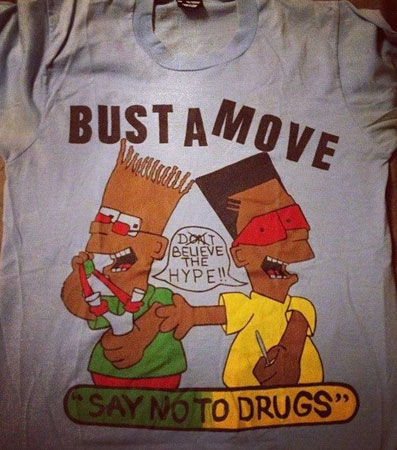 I’m not exactly sure what the takeaway is supposed to be from this one. Is it that Young MC rules? Is it Don’t believe the hype? Is it “Say No To Drugs”? Or is it that you should take drugs because Flattop Bart and Slingshot Bart are cool? This shirt is definitely Nuts and Gum. 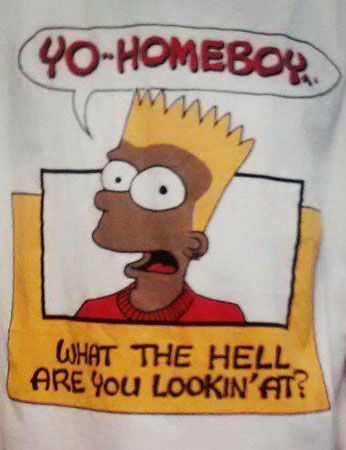 Black Bart is cool. Bart in blackface — decidedly NOT cool.

9 | It’s a Black Thing, You Must Understand 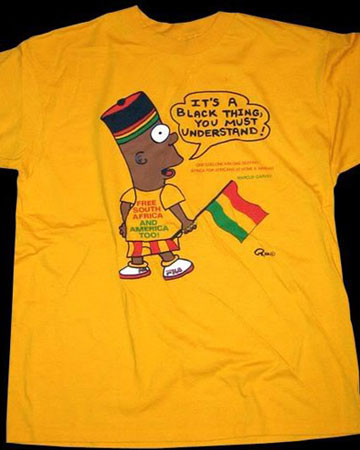 Well, I understand some of it. I understand the desire to Free South Africa. (That was a huge early ’90s cause, with Apartheid in its final years.) I can basically see the mental path from there to “free America too,” although more abstractly. I’m not entirely sure why Bart is holding Ghana’s flag without the star in the middle though. Or why he went with Fila shoes, when I’m SURE he could’ve dug up some British Knights. 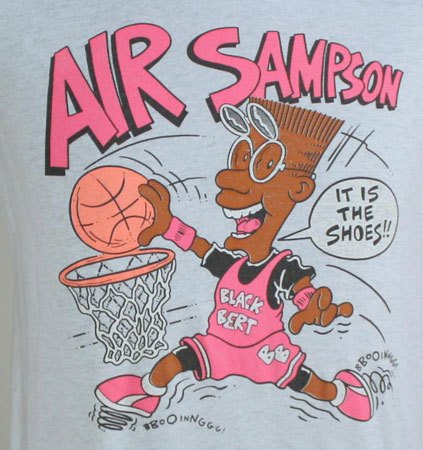 Bert Sampson? I think that’s a meek attempt to dodge the 20th Century Fox legal team as opposed to an homage to the episode where Bart crank calls Australia and frustrates them by saying his name is Bert Stanton. (Mostly because the t-shirt clearly predates that episode by a good five or six years. Also, obviously.) 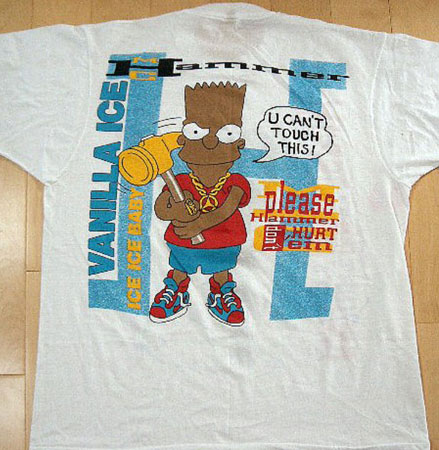 This is one of those true bootlegs, where someone just jams together a bunch of pop culture symbols because they don’t really know better. Like the Chinese backpacks that have pictures of Sonic the Hedgehog and the slogan “Coca-Cola!” Or some of the Harry Potter bootlegs from this list I once did.

Although, in this bootlegger’s defense, this t-shirt actually contains the three quintessential pieces of pop culture from my life in sixth grade. I swore by Vanilla Ice’s To the Extreme, M.C. Hammer’s Please Hammer Don’t Hurt ‘Em, and The Simpsons. (Also, eventually, The Simpsons Sing the Blues.) In other words, I would’ve (and still would) wear the hell out of this t-shirt. Especially if it’s Hypercolor.

11 Favorite T-Shirts in My 368-T-Shirt Collection