Do you need to bake a cake to apologize for soap, fajitas or running over someone’s baby?

After putting together this list, I deeply regret that I haven’t used cakes to apologize for the biggest mistakes I’ve ever made. I’m not sure I need to send myself an apology cake for missing that opportunity, but it’s close.

There’s no shortage of photos of apology cakes online; if someone takes the time to bake you or order you a customized apology cake, you’re probably gonna take a photo of it. And while many of the apologies are straightforward, some are far more ambiguous. Those are the ones I love.

I put together this collection of 11 photos of cakes apologizing for strange and mysterious events. After all, any cake that requires a back story is a well-decorated cake.

1 | Happy Birthday. I’m sorry the Soap was a bad idea 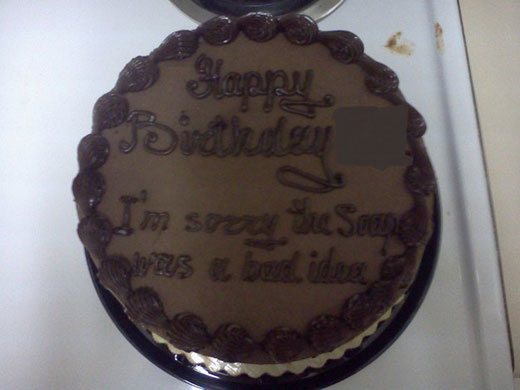 Best theory: The wife behind this cake gave her husband decorative soaps as a birthday gift, which is basically the female equivalent of giving a “Homer” bowling ball. A fight broke out, so the cake had to multitask as both a birthday cake and an apology cake.

Worst theory: This is a prank cake for someone whose English isn’t so good and when they bite into it, they’ll find out the secret ingredient is dish soap. After a precautionary call to poison control, everyone will have a good laugh and it will be declared a the best birthday ever. 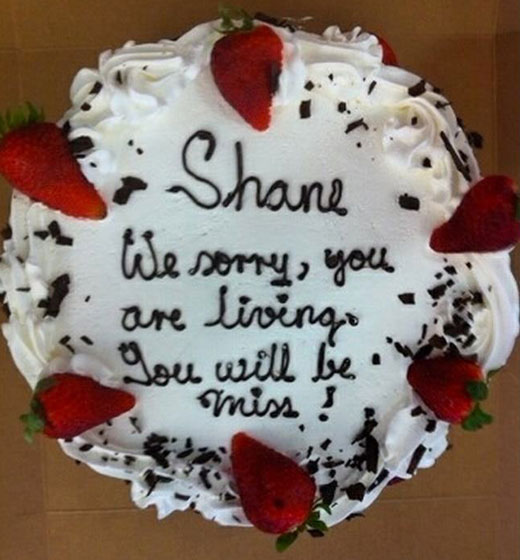 Best theory: A language barrier turned a cake that was supposed to say “Shane, we’re sorry you are leaving. You will be missed!” into this.

Worst theory: The people behind this cake really hate a woman named Shane and bought this cake as a warning. They’re sorry she’s living, and because of the way they’re about to make her life miserable, she will be too. (Thus the tone on the last line, with the emphatic “Miss.”)

3 | Sorry Your Client is a Sociopath! 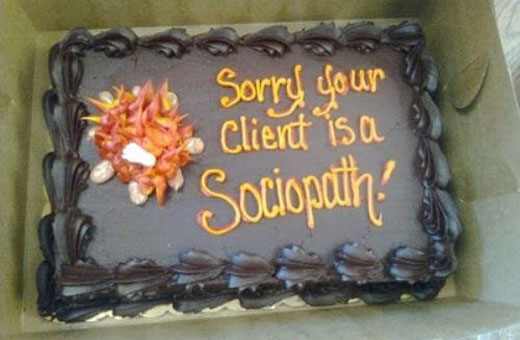 Best theory: A coworker who was dealing with a difficult grenade elicited enough sympathy from the office they all chipped in to buy this cake. (Also, it had been like three days since someone’s birthday so they were all craving their daily cake ration and just needed a reason.)

Worst theory: This person’s client is literally a sociopath who murdered seven people in a ball of flames, as per the decoration.

4 | Sorry I tried to Sacrifice you to SATAN 🙂 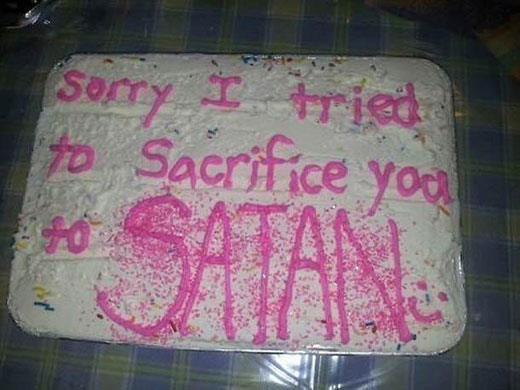 Best theory: A high school girl went through a devil worshipping phase, briefly tried to kill her best friend in a sacrifice, then snapped out of it and got back into her old hobbies of baking and glitter.

Worst theory: A color blind Satanist botched a sacrifice and meant to decorate this cake in red frosting. The glitter around Satan is supposed to represent the blood of 1,000 virgins raining over the lands and the smiley face is really supposed to be devil horns but the Satanist ran out of frosting halfway through. 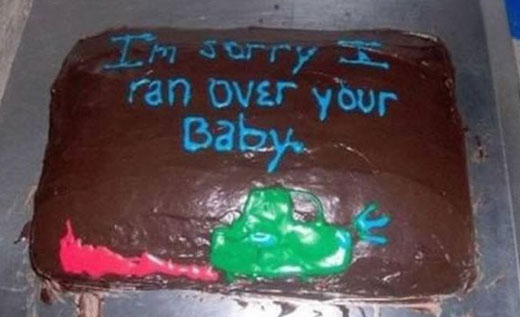 Best theory: “Baby” doesn’t literally mean a human baby. The person who baked the cake ran over the other person’s bike or phone or some other inanimate object that the recipient loved so much he or she referred to it as “my baby.”

Worst theory: This person ran over a friend’s baby, left a trail of blood behind and felt a homemade cake was the only way to square things away. I don’t know any of the parties involved, but I’d feel comfortable saying this apology was insufficient. 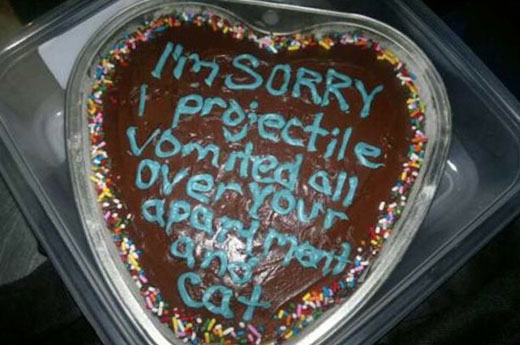 Best theory: Some people were hanging out at an apartment, one did a shot of some horrible liquor — most likely lukewarm rum or sloe gin — and immediately started vomiting. The cat was unlucky enough to get in the way.

Worst theory: The person who made this cake tried to eat their friend’s cat but couldn’t quite get it down.

7 | Sorry for what I say during Mario Kart 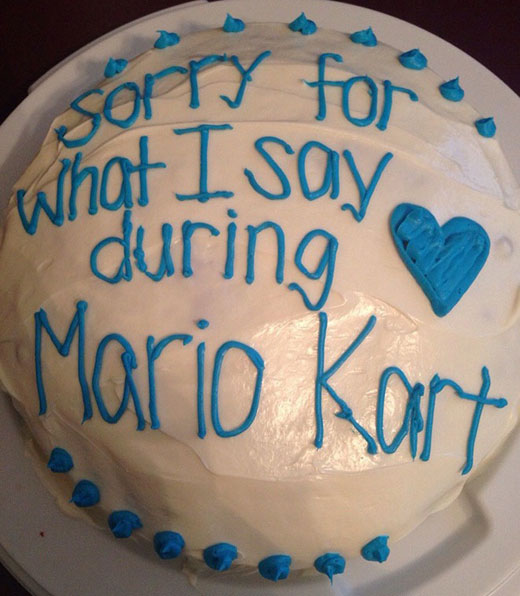 Best theory: I’ve played enough Mario Kart to know the usual frustration spots, but few of them elicit expletives. It’s hard to figure this out. I’m thinking it must’ve been someone calling someone else an a-hole for a miraculous third lap green turtle shell hit.

Worst theory: The person behind this cake called Peach a lightning-hoarding bitch.

8 | Sorry we caught you dry humping our son — We still love you! 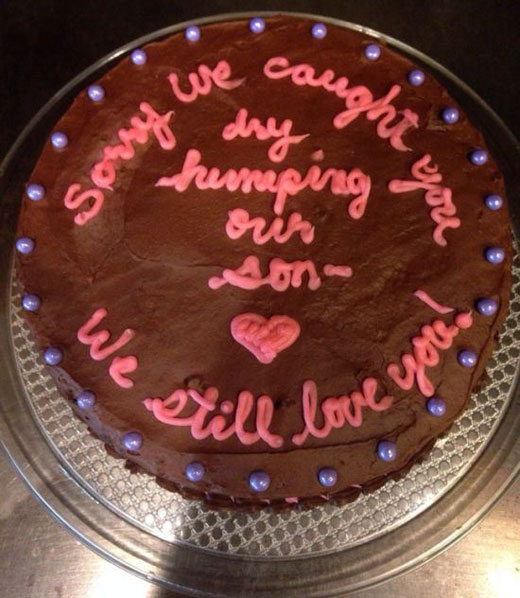 Best theory: Parents caught their teenage son and his girlfriend having sex (or, possibly, fully clothed grinding) and the girl was so mortified she ran out of the house crying. The parents made her a cake as a comical way to smooth things over.

9 | Sorry I set off the fire alarm while having sex! 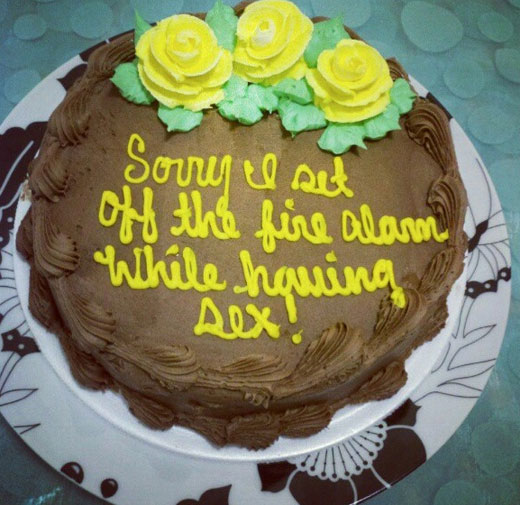 Best theory: This young lady lit a bunch of candles in her apartment to set a romantic mood and the smoke set off the fire alarm, causing her roommate to panic.

Worst theory: This young lady was engaged in some kind of crazy fetish play involving a blowtorch and didn’t realize she was using highly flammable pina colata butt lotion. Next thing you know, the entire building is on fire and she’s sprinting down the street to the cake shop trying to figure out of three yellow frosting flowers really will help the apology work. 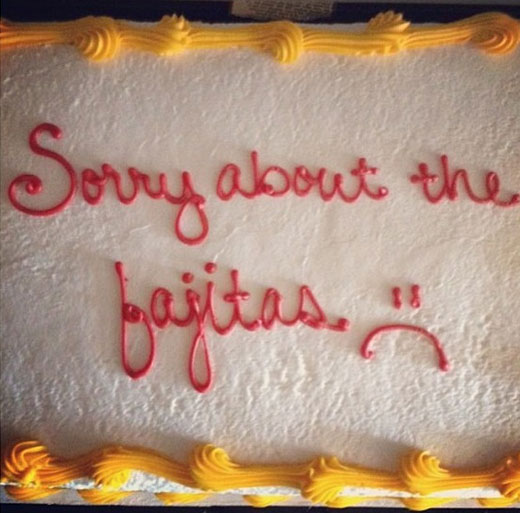 Best theory: Man, this is a tough one because it’s hard to imagine anyone could ever screw up something fajita-related badly enough to warrant an apology cake. I guess maybe someone spent hours preparing fajitas and their significant other came in, said, “Eww, I don’t want fajitas,” and threw everything in the garbage? That could be bad enough to require a cake as part of the apology.

Worst theory: I guess maybe someone spent hours preparing fajitas and their significant other came in, said, “Eww, I don’t want fajitas,” and threw everything in the garbage? That could be bad enough to require a cake as part of the apology. See. There really isn’t any viable theory here. 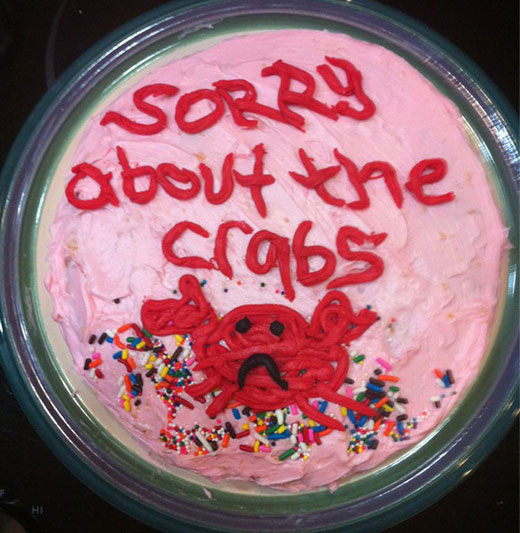 Best theory: The person who baked this cake either promised the recipient a crab dinner and couldn’t deliver or gave the recipient pubic lice.

Worst theory: The Kool-Aid Man either promised the recipient a crab dinner and couldn’t deliver or gave the recipient pubic lice.

11 Cakes with Glorious Typos and Errors