An aggregate of reviews on the worst beers — and my own opinions on the REAL answers.

American beer has a pretty bad reputation. Even though our country now has approximately one craft brewery for every 1.7 people, when people think American beer, they think of the piles of 30-packs at Rite Aid. And you can’t really hold it against them — until like 2012, that pretty much WAS American beer. Buzzfeed wants to be known as a serious news organization but their top trafficked story yesterday was “Pretend to Buy Some Expensive Shit and We’ll Guess Your Age.” Rebranding is glacial.

The slideshow-riffic website 24/7 Wall St. recently put together a list of the worst-tasting beers in America, according to thousands of reviews on Beer Advocate. Statistics don’t lie, except for all the lying they do, so I thought I’d make my own picks as well.

Today’s article follows in the tradition of my posts on like the 11 most boring things in life, where I’ll relay what the data said, then make my own picks. My picks in that case ranged from long Monopoly games to any Internet hiccup to 2 Broke Girls. I always end with 2 Broke Girls. What other choice do I have, right? 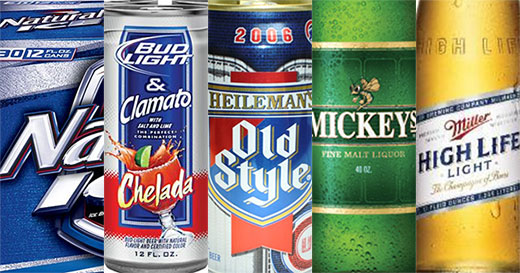 First, here are the 11 worst-tasting beers in America, according to a composite of reviews…

Coors Light did better than Bud Light, but Miller Lite did better than both — it was only the 24th worst overall. That would only make it something like a six seed in the NCAA bad beer tournament. Where it would be put on upset alert by a mid-major automatic qualifier like Leinenkugel.

Good for Keystone Light playing in this sandbox with so many heavy hitters. I wonder if this falls under the “any publicity is good publicity” axiom.

This is the only non-American beer on the list. At least, the only one that started that way. Now Anheuser-Busch is a Belgian company, MillerCoors just got back from finding itself in South Africa, and Pabst, like so many things these days, may or may not be completely controlled by Russia.

Hmm. Who would’ve thought that mixing Bud Light and tomato + clam juice would produce something foul. Meanwhile its sassy cousin, Bud Light Lime-a-Rita, is nowhere to be found on this list.

The lowest-calorie beer on the market. I didn’t know they even sold this anymore; I thought people caught onto the “low-calorie beers are also lower in alcohol so you have to drink more of them and it all evens out” scam. It’s like the mid-2000s beer equivalent of the Snackwells cookie revelation of 1996.

Seven years ago, I wrote, arguably, humanity’s only Natural Light magnum opus. Needless to say, I think its positioning as the worst beer in America is an unacceptable besmirching.

And now, my picks for the REAL 11 worst-tasting beers in America…

None of those words makes sense in a sentence with any of the other words.

One of the greatest examples of all time about how top-shelf marketing can sell a bottom-shelf product. The amber is alright though.

8 | The stuff that one friend of yours home brewed

I will only drink homemade beer out of a bowling ball.

Back in my roaring 20s, I spent four years living in a house with three of my friends where we threw lots of parties. I think about eight cans of Tecate heavy sat in our fridge for the entire duration.

6 | Any craft beer that incorporates coffee

The coffee/beer combo just doesn’t work, no matter how much they keep trying to make it happen.

Once upon a time, I liked Old Style because of its nostalgic connection to going to Wrigley games during college. Now the Cubs and their gross beer can all go straight to hell as far as I’m concerned.

Recency bias: Took a sip of a St. Pauli Girl this weekend, immediately regretted it.

The 11 Beers People Drink to Try to Look Cool