When fast food restaurants get crossed up with religion it literally never goes well.

There’s been a lot of fury flying around recently about fast food chains and whether there should be a separation between church and gaining weight. Fortunately, there’s been a lot of rational, well-reasoned debate about it on the Internet which has helped me form educated opinions on the matter. 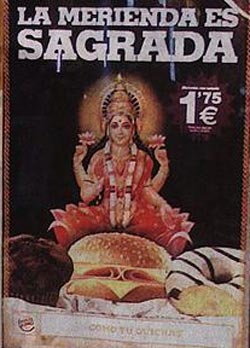 This seems like as ill-conceived an idea as Burger King’s commercial where they had Mary J. Blige worshipping chicken. Burger King’s Spain branch released an ad showing a Hindu goddess sitting on top of a sandwich. The caption reads: “A snack that is sacred.” Hindus didn’t like seeing their goddess portrayed like that; and since the majority of Hindus are vegetarian, they especially didn’t want her shilling for a ham sandwich. Burger King ended up pulling the ad.

Domino’s was founded by Tom Monaghan, a devout Catholic. He donated to pro-life causes and hired a priest to say mass each morning in the conference room of Domino’s headquarters. Monaghan sold the chain in 1998 A.D. (Anno Domino’s) and at some point since, the corporate priest got the boot. Which worries me, since some might speculate his spiritual guidance was the only thing keeping the Noid at bay. 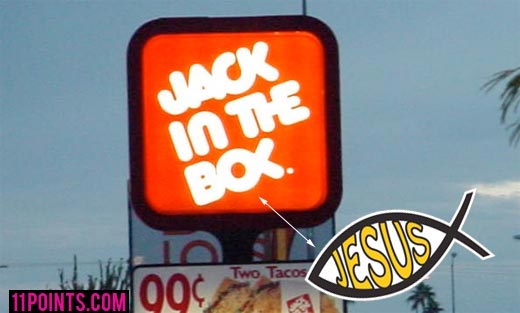 Apparently I’ve written about this before, because when I Googled “Jack In the Box Jesus fish” the first result was my list of 11 Hidden Messages In Food Ads and Logos. It’s unclear whether that was intentional; it has become a moot point anyway as Jack In the Box changed their logo. Based on what Jack In the Box is serving, I think that disassociation is a win for Jesus. 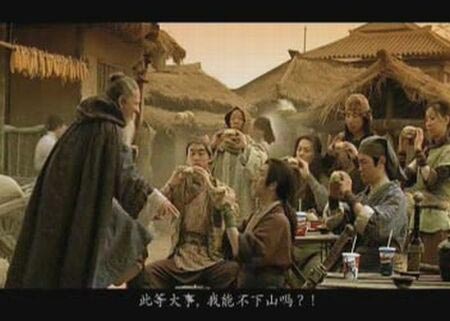 As part of KFC’s effort to make inroads in China — and compete with China’s homegrown offensive ripoffs like Obama Fried Chicken — they released a commercial in 2006 featuring a Taoist monk declaring their sandwich a “masterpiece.” The Taoists didn’t find that particularly groovy and were outraged. If that bugs them, you can only imagine what they think of Kung Fu Panda. 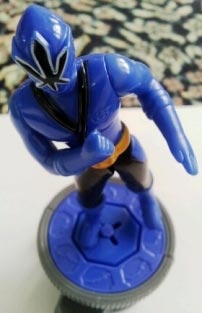 Back in May, McDonald’s released a Happy Meal toy in Saudi Arabia of a purple Power Ranger. And around the base of the toy there are squiggly designs. Apparently those squiggly designs looked too similar to the word “Muhammad” — and as we’ve all learned, that’s dangerous sledding right there. The Saudi McDonald’s caved to the pressure and withdrew the toy to “safeguard against any accusations or misunderstandings.” But the MOST shocking detail of the story? Power Rangers are still a thing. 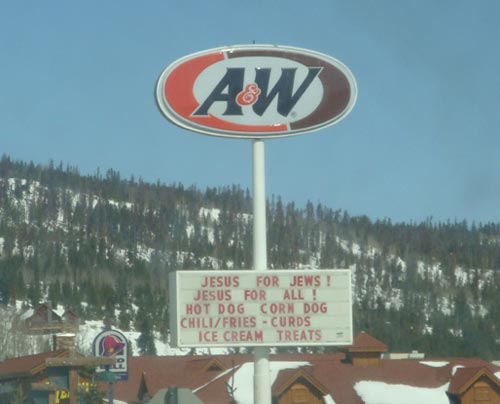 I really don’t follow the logic here — just seems like a scattershot message of evangelism and cheese curds — but as a Jew, I can say that I’m not going to take them up on the Jesus offer but would love a root beer float.

7 | Taco Bell settles a lawsuit for discriminating against a Nazirite

Taco Bell usually offends Mexicans — through both stereotypes like the Taco Bell Chihuahua and/or passing what they serve off as Mexican food — so it was a rare occasion that they offended a religion too. They ended up paying $27,000 after firing a man who refused to cut his beard under the tenants of his Nazirite beliefs. Because, ya know, a stray beard hair would’ve made an enchirito gross. 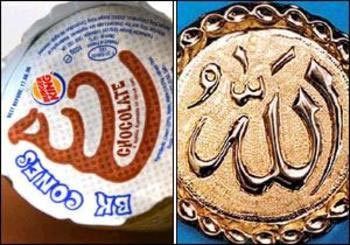 In 2005, Burger King overseas released a chocolate ice cream cone. But when you turned the swirling ice cream logo on top of the cone sideways, it kinda resembled the Arabic spelling of Allah. Kinda. If you squint a little bit and meet them slightly more than halfway. It’s a classic Homer Simpson sacrilicious situation. Anyway, someone threatened a jihad and the cones were pulled. 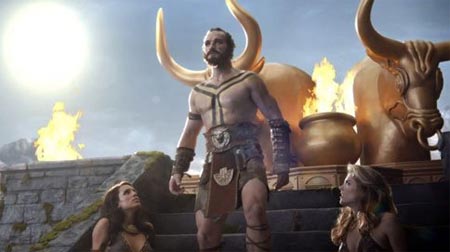 So Carl’s Jr. is conflicted. The founder (THE “Carl” of Carl’s Jr.) was very religious and donated money to anti-abortion and anti-gay rights causes. He also started meetings with a prayer, which is apparently a tradition they still use today.

BUT… Carl’s Jr. also airs commercials that show Paris Hilton and Kate Upton having sex with hamburgers. And last year, they had an ad campaign around a fake god of hamburgers named Hamblor. (No doubt the brother of Gamblor.)

Who knows what’s going on over there? Maybe it’s somewhat analogous to what Rupert Murdoch did with Fox — using the success of shows like Temptation Island and Studs to fund Fox News? 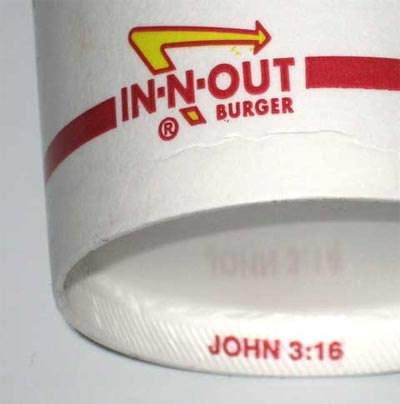 For about three decades, In-N-Out has been putting Bible passages on the inner rims of the bottom of their cups. They’re not in your face with it, but if you look at the bottom of the cup, you’ll see a John 3:16 or a Proverbs 3:5. In other words, In-N-Out cups are the guy holding up a sign at football game.

There’s been a lot of controversy over Chick-Fil-A’s religious leaning. It most certainly will cost them a significant amount of business, and it’s definitely upset many people all over the country.

I am, of course, referring to their policy of being closed on Sundays.

Buuuut seriously folks, here’s my thought on Chick-Fil-A’s anti-gay stance. As an adamant supporter of gay rights, I think it’s horrible. And once the U.S. does have equal rights for gays (and people move on to discriminating against whomever’s next in line — the obese perhaps?) this will be a horrible black eye for Chick-Fil-A. Much like how the Ford Motor Company is (hopefully) mortified about Henry Ford’s anti-Semitism. Or how baseball is embarrassed at how long it took to integrate black players. And if Chick-Fil-A’s politics are enough to give you pause, you really don’t ever have to eat there again.

But do keep in mind there are plenty of businesses beyond Chick-Fil-A that donate (or whose founders donate) to anti-abortion and anti-gay rights causes. Their founders have enough business sense not to publicly brag about it like Chick-Fil-A’s, but that doesn’t make their donations any less significant. Companies like (the aforementioned) Carl’s Jr. and Domino’s, plus others including Curves, Target, Best Buy, Urban Outfitters, Walmart, and (I’m sure) plenty of others have also donated to either anti-abortion or anti-gay rights causes and candidates.

And on the other side, companies like Southwest Airlines, Apple, Whole Foods, Bank of America, Nike, eBay, Olive Garden, and, again, (I’m sure) plenty of others have donated to Planned Parenthood, pro-gay rights and pro-choice causes and candidates. I even found websites claiming Salvation Army had contributes to both sides.

The point of all this isn’t to advocate a cognitive dissonant “can’t win, don’t try” position; I’m not suggesting that since every company’s donating to something it isn’t possible as a consumer to boycott every company whose politics and/or religion don’t match yours. The point is that they ARE all donating to something and we’re naive to think they’re not. Whenever you spend money it’s being divided in ways you don’t know and wouldn’t believe; that’s not me being a conspiracy theorist, that’s me being a realist. We live in a era of the some of the worst divisiveness and rhetoric in recent history, and allowing our serious issues to become symbolically represented by fast food restaurants seems cheap. So rather than channeling outrage toward Chick-Fil-A — or, if you’re on the other side of that debate, gaining 800 pounds gorging on Chick-Fil-A to prove just how hot you are on man-woman (and now, in your case, CBS-esque) marriage — I think it’s worth digging deeper and figuring out more direct ways to support the politicians, causes, organizations and policies that can ultimately bring more of a difference.

Because gay marriage isn’t going to be banned via $2 chicken sandwiches.

11 Fast Food Shout-Outs In Songs, Ranked From Positive To Negative