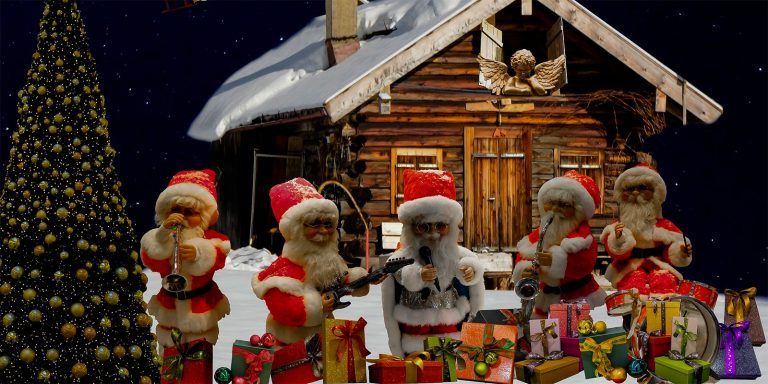 There are so many Christmas songs that are awfully unsettling if you take a deeper look at the lyrics.

It’s that time of year between Flag Day and December 26th where Christmas songs are completely ubiquitous. Twist: I don’t really mind. Sure, I wish my favorite L.A. lite rock station didn’t have to go 24-7 Christmas songs, denying me my regular doses of Peter Cetera and Atlantic Starr. And my internal injustice meter is raging that Jim Brickman’s masterpiece The Gift doesn’t get even one thousandth of the spins of that Mariah Carey song. But still, even as a Jewish guy, I like Christmas music.

All that being said… some of the lyrics of some of the most popular Christmas are really unsettling if you actually look at them (and/or take them out of context) without cheerful/familiar/nostalgic melodies behind them.

I put together this list of 11 Christmas songs (well, 10 Christmas songs and one token Hanukkah song because that’s how I do) that have some unexpectedly creepy, dark and/or just plain wrong lyrics. Let’s roll…

I saw Mommy tickle Santa Claus,
Underneath his beard so snowy white.
Oh, what a laugh it would have been,
If Daddy had only seen,
Mommy kissing Santa Claus last night.

The premise of this song isn’t as sing-songy as the execution. A kid comes downstairs, sees his mother kissing Santa, and laughs heartily about catching a glimpse of her cheating on his father. What a laugh it would’ve been if mom really was kissing an old obese guy in the living room and dad came home early from his business trip to St. Louis. I Saw Daddy Hitting Santa Claus In the Head With a Shovel and Screaming Something About a Pre-Nup doesn’t quite have the same kitsch.

Edited to add: Of course I know that the Santa in the song is really the kid’s father, in costume, so mom isn’t cheating. My point here is that the kid singing doesn’t realize this. He’s joyfully watching what he believes to be his mom cheating on his dad.]

Next comes the stocking of little Will,
Oh just see what a glorious fill.
Here is a hammer and lots of tacks,
Also a ball and a whip that cracks.

So Santa’s going stocking to stocking, giving these kids presents. And he gives a little boy four items that could be part of an “My Lil’ S&M Dungeon” starter kit. If only Santa had a gimp hood and nipple clamps somewhere in his bag.

The neighbors might think – Baby, it’s bad out there.
Say, what’s in this drink – No cabs to be had out there.
I wish I knew how – Your eyes are like starlight now.
To break this spell – I’ll take your hat, your hair looks swell.
I ought to say no, no, no, sir – Mind if I move a little closer?
At least I’m gonna say that I tried – What’s the sense in hurting my pride?
I really can’t stay – Baby don’t hold out.
Ahh, but it’s cold outside.

This is a very popular duet but, on some level, it’s about a woman trying to leave and a guy throwing every single line he can think of to get her to stay and, ostensibly, have some sex. (Or, at the time when this was written, perhaps some necking and petting.) It’s the holly jolly rebuttal to “no means no.”

4 | Santa Claus Is Coming To Town

Little needs to be said here — whether it’s Santa Claus, Holden Caulfield’s English teacher, or a guy across the street in a tree with binoculars, you really don’t want someone watching you when you’re sleeping. Especially when he gets carte blanche to enter your house later that month.

Myrrh is mine, its bitter perfume,
Breathes a life of gathering gloom.
Sorrowing, sighing, bleeding, dying,
Sealed in the stone cold tomb.

So what you’re telling me is you brought me some myrrh — I’m still not altogether sure what myrrh is — and you’re telling me if I smell it it’s going to make me think of a guy dying a slow, painful death while he’s buried alive? This is the worst birthday ever. If you were going to give me a gift that smelled like painful death, at least you could’ve sprung for some Axe body spray.

Side note: I was at a party this weekend with a Secret Santa gift exchange. The gifts were supposed to run about $35. My friend Kristen pulled a gift and ended up getting a DVD of The Love Guru. I’m not sure on what planet that runs $35. Or arguably 35 cents. Anyway, The Love Guru on DVD is the modern equivalent of giving myrrh.

6 | We Wish You a Merry Christmas

Everyone loves when people come to their house, rudely demand an obscure batch of pudding, then hold a sit-in until you bring it out. It’s exactly what sit-ins were made for.

7 | Bells Will Be Ringing

Bells will be ringing, the glad, glad news.
Oh, what a Christmas, to have the blues.
My baby’s gone, I have no friends,
To wish me greetings, once again.

And *this* is why you have to be careful not to abandon your friends once you get into a relationship.

Pray for the other ones,
At Christmastime it’s hard, but when you’re having fun,
There’s a world outside your window,
And it’s a world of dread and fear.
Where the only water flowing is the bitter sting of tears.
And the Christmas bells that ring there are the clanging chimes of doom,
Well tonight, thank God it’s them instead of you.

This ’80s British equivalent of We are the World is supposed to be a reminder to think of those less fortunate than you this Christmas — but, at least from where I’m judging, the execution is comically condescending and misguided. Yes, let’s all thank God that we’re not poor but instead those other people are.

9 | I Have a Little Dreidel

It has a lovely body,
With legs so short and thin.
And when he gets all tired,
He drops and then I win.

This is probably the best-known Hanukkah song. It starts with building a dreidel… and then quickly evolves into checking out the dreidel’s sexy body and playing with him so much that you tire him out. And trust me, there’s no element of that in Hanukkah. It’s not a sexy holiday. They don’t sell Hanukkah lingerie. The oil that lasts for eight nights isn’t edible body oil.

Yeah, these lyrics wouldn’t fly today at all.

If you sit on my lap today,
A kiss a toy is the price you’ll pay.
When you tell what you wish for in a whisper,
Be prepared to pay.

This is from the stop-motion Santa Claus Is Comin’ To Town TV special (see the video here). It was made in 1970 where I’ve been told it wasn’t creepy for adult males (even ginger ones) to ask little kids for kisses in exchange for presents. Forty years later, and we just can’t roll with that. If a mall Santa started asking kids for kisses a group of parents would drag him right off his chair, take him to the food court and violate him with hot dogs on a stick.