The right shirt at the right time is a thing of beauty.

I fear that we’re only a few years away from the end of the funny t-shirt era. It had a nice run, but I feel like we’re getting closer and closer to the day when it’s not totally awesome to wear a shirt with a picture of the Liberty Bell that says “Come to Philly For the Crack.” Don’t worry, though — Urban Outfitters will find a way to survive. Sunglasses aren’t going to kitsch themselves.

But, before the t-shirt era does crumble, we can enjoy people wearing their graphic t-shirts at completely inopportune times. I’ve been collecting photos for this list for quite some time and finally hit 11, so let’s roll. Ironic t-shirts, here we go. 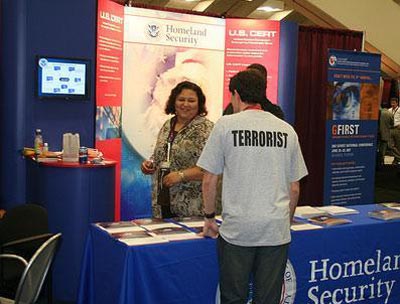 This is even more blatant than wearing a Miami Hurricanes t-shirt to the FEMA booth. Or a shirt that says “Claustrophobic” to the Department of the Interior booth. Or a FBI (Female Body Inspector) shirt to the FBI… or, these days, TSA… booth.

2 | You can keep on telling us that it means “good luck” in your culture, but we’re still not letting you wear it to the mall 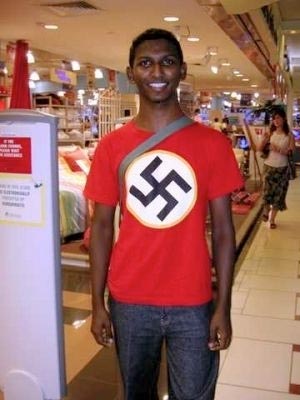 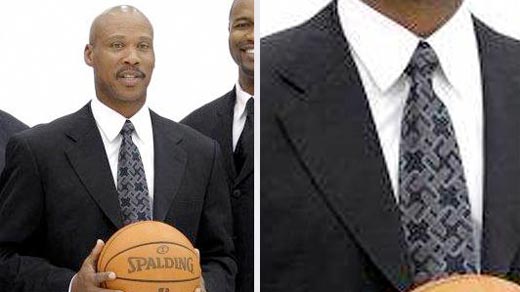 3 | Hope you kept the bondsman’s number 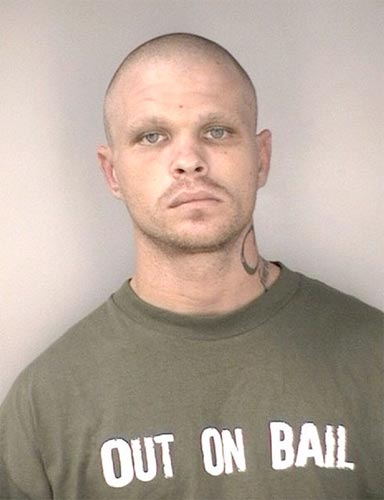 There’s no shortage of ironic (and/or coincidental — ya hear me, Internet?) t-shirt mugshots online. I chose a few of my favorites for this list, like this one.

Quick story tangent: Back when I first moved to L.A., the hip-hop stations would always run a commercial for a bail bonds place that offered a free Ice Cube’s Greatest Hits CD with any bail bond. This t-shirt seems like a better giveaway. Either way, when you get out on bail, that makes today a good day.

4 | Business in the front, racially charged in the rear 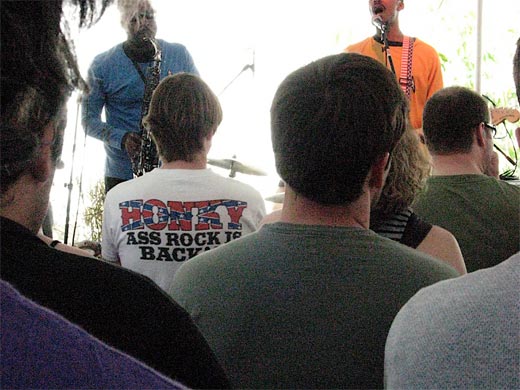 This photo made the list because, naturally, the “Honky Ass Rock Is Back” guy is watching a non-honky ass saxophone player. And as much as I liked the t-shirt, I think I’ve spent more time trying to figure out if the sax player is or isn’t wearing a Star Trek shirt. 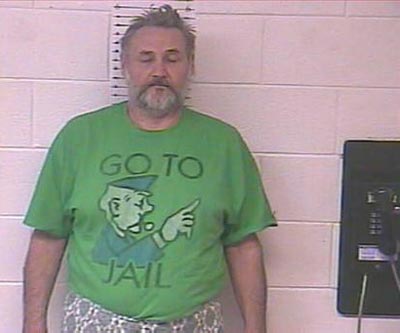 If the real police didn’t get him, with that t-shirt/Zubaz combo, he still would’ve been busted by the *fashion* police. Am I right? Ladies?

6 | Who will protest the protesters? 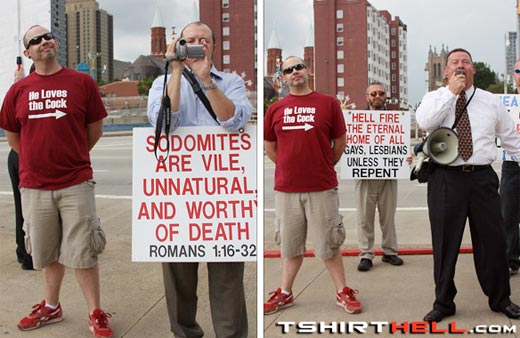 I suspect this guy’s t-shirt is accurate, under one of the newest irrefutable laws of life: “A person’s passion in their opposition to homosexuality is inversely proportional to the likelihood he’s eventually going to get busted with a male prostitute in the bathroom at a public park.”

7 | I don’t think it really works that way 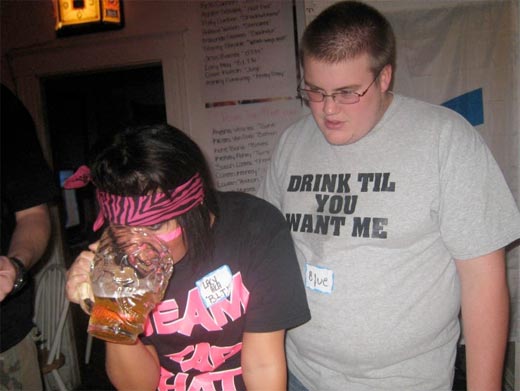 I’m thinking the girl saw old Blue’s t-shirt there… which is why it looks like she’s barely drinking. 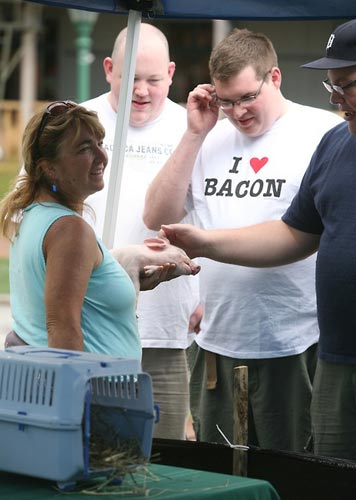 I originally picked the picture because I loved the bacon/pig juxtaposition… but now I can’t stop trying to figure out if the “Drink Til You Want Me” guy pictured above is the SAME GUY. Maybe like two years later?

9 | Why must you turn this list into a house of lies? 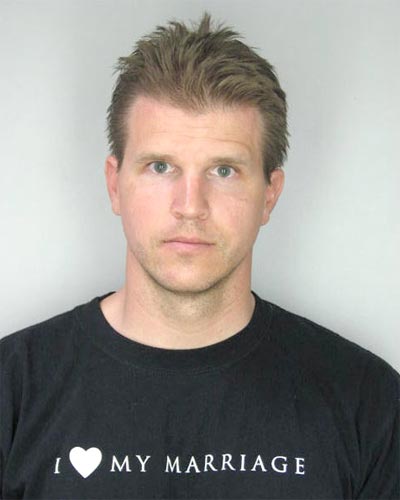 According to the Internet, this guy was wearing the shirt when he was arrested for allegedly choking his wife during an argument. That’s nice and juicy and all, let’s all laugh at him, etc. More important — the reason he had this t-shirt was because Kirk Cameron was passing them out to promote his Christian-themed movie Fireproof. Seriously. I feel like this guy really needs some counseling. (Dr. Jason Seaver is probably available.)

10 | Time to go America all over this girl’s ass 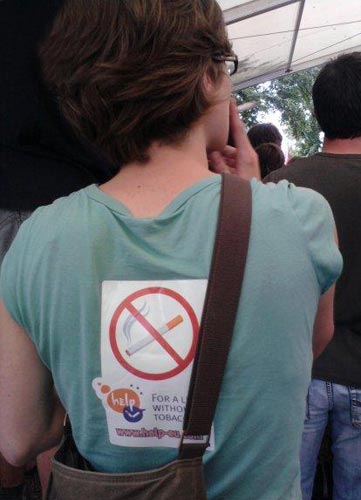 I was going to judge her for her hypocrisy, but I’ve been just as bad at betraying the message on my t-shirts. Why, right now I’m wearing a No Fear shirt and I’m constantly overwhelmed with fear. Yesterday I wore a Big Dogs shirt while walking my girlfriend’s little 10-pound mutt. And don’t get me started on what I refuse to do while wearing my Co-ed Naked and Big Johnson shirts. 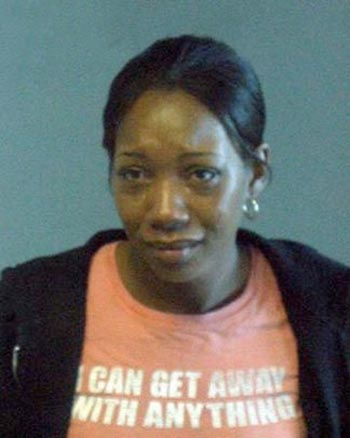 You know the Greek gods weren’t going to let her get away with that degree of hubris. Even Dionysus put down his Four Loko to say, “Aww hellll no.”

11 Favorite T-Shirts in My 368-T-Shirt Collection

11 Coincidental Wardrobe Choices That are Evidence of Cosmic Intervention