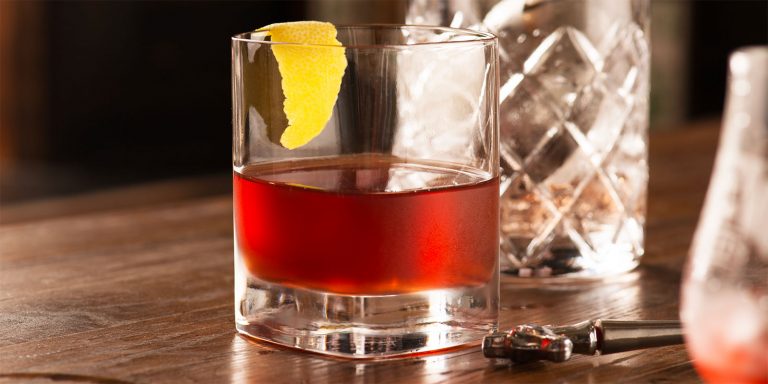 The good people at 12BottleBar.com give me some simple recipes for the best cocktails in the world.

When you have a blog that starts with a number, you have a strange kinship with other blogs that start with numbers. Even ones whose subject matter seem completely alien to you.

I’m not an alcohol connoisseur. I’m no teetotaler (although I should win a bet for organically working that word into a sentence) — I just don’t know anything. I bring Smirnoff to parties and rarely order a beer fancier than Amstel Light. (So you can imagine what I drink when I’m not putting on airs.)

That makes me the opposite of the guys who run 12BottleBar.com. They know alcohol. They love alcohol. When you read their site, they deliver prose about drinks like they’re writing for the J. Peterman catalog.

But their concept is simple — with only 12 bottles of liquor (you can see the 12 bottles on their site), and a little care, you can make a countless number of high-quality, classic drinks worthy of flowery adulation.

So I asked them to send me 11 of their favorite drinks to help class up this joint. But I demanded they only include 11 of their 12 bottles. Sweet vermouth got the ax, they sent me the cocktails, and that produced this list… 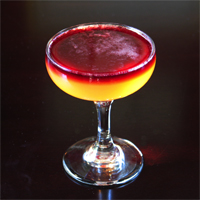 Shake whiskey, lemon juice, syrup together and strain. Top with a float of red wine.

“Simple syrup” means that you make your own syrup. Basically it’s one cup water, two cups sugar. That way you don’t have to buy some corn syrup n’ chemicals version from the store. The red wine probably shouldn’t have the words “Charles,” “Shaw” or “preferred by hobos everywhere” on the bottle. Yes, these drinks are all about the ingredients. You don’t become a drink maven by buying a $60 dollar bottle of whiskey and then mixing it with TGI Friday’s sour mix and a twist from your box of Franzia. 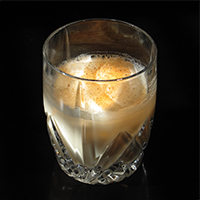 Shake with ice. Either strain into a rocks glass filled with ice or skip the strain and include the ice from the shaker in your pour. Garnish with freshly-grated nutmeg. Serve with a straw.

I think this is an important one to include because, on the website, they describe this as “A New Orleans staple [that] can probably best be thought of as a very, very light eggnog… [it’s] the surest thing in the world to get drunk on, and tearfully drunk.”

Just in case in all this talk of quality and classiness there was any ambiguity about whether these drinks can send you to the floor. Yes, these guys celebrate alcohol, and there’s a definite seductiveness about drinking a sophisticated drink and truly appreciating its taste and quality as they do. But at the end of the day, it’s good to know that sometimes, they’re stumbling home and asking their friends if Domino’s stops delivering at 2 or 2:30 just like the rest of us. 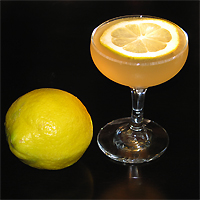 Shake with ice and strain. Garnish with lemon wheel or twist.

This is a drink in the “sours” family that looks like it finds that sweet spot: A juicy drink that a real man can order. I thought it might be named after F. Scott Fitzgerald but I couldn’t make the connection. I’m fairly sure that Gatsby wasn’t bootlegging a chic brand of bitters. Although he’d probably tell you he was if you asked him. 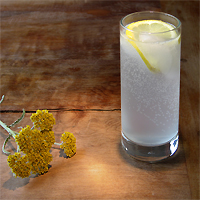 Stir Genever, lemon juice, and sugar together in a Collins glass until sugar is dissolved. Add 2-3 ice cubes and top with club soda. Garnish with a lemon slice.

Not to be confused with a Tom Collins (gin, lemon juice, sugar, club soda) or a Joan Collins (she’ll sleep with anybody). 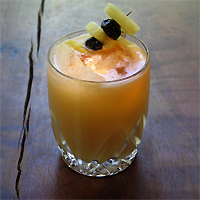 Shake everything with large ice and strain into rocks glass full of large ice. Grate fresh nutmeg generously over the top. Garnish with fruit as desired.

I personally stopped drinking ultra-fruity drinks a few years back. I was in Hawaii and was motivated by what the tourism bureau (but, I’m pretty sure, no actual people) call the Aloha spirit. I ordered some drink with the word “volcano” or “lava” — something like that — in the title. It was basically a giant, icy goblet of fruit punch with some alcohol buried in there somewhere. I put the drank down, crossed my fingers that I wouldn’t forever recall that moment as the onset of type-2 diabetes… then promptly got a brutal and debilitating headache that ended my night.

That night I swore off fruity alcoholic drinks, and I kept that pledge. (Except for the one morning back when I was working in an office, I felt rebellious, so I added an airplane bottle’s worth of vodka to a Jamba Juice.)

I’ve never had a fruity drink like this one, made from a non-Captain rum, homemade coconut milk and, I assume, fresh squeezed orange juice. Would it still give me a headache? They called it the “Painkiller” — so either that’s ironic or prophetic. 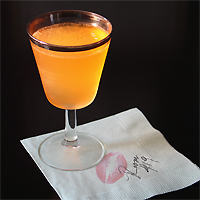 Combine all ingredients in a mixing glass, straining the lemon juice first. Add crushed ice. Shake. Strain into a coupe or similar glass.

Basically, this drink comes from the Sex on the Beach/Screaming Orgasm/Slow Comfortable Screw/Slippery Nipple/Purple Hooter innuendo family of drinks. But it’s like the family member who actually got out of Daytona Beach and went to college at Bennington. 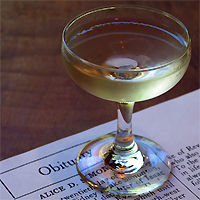 This cocktail is described on the site as one you should drink when you wake up on a Monday morning, check the obituaries and see that you’re not listed. (If you were listed, you’d probably need Haley Joel Osment to read the obits out loud to you, but that’s neither here nor there.) I don’t know. If you’re drinking absinthe at 7:30 am on a Monday morning, you might want to go ahead and at least send the newspaper a prepayment on one. 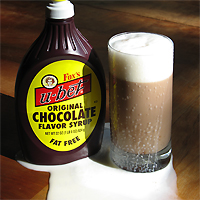 Add about 0.5 inch chocolate syrup to a large glass. Next, add milk, filling glass to the halfway mark. Do NOT stir. Add Genever. Slow add club soda while moving a bar spoon quickly up and down in the glass. Continue until glass is overflowing and proper chocolate drink with white foamy head has been achieved.

This is just like an egg cream, except alcoholic. Like an egg cream, it consists of neither egg nor cream. (If you read that sentence to yourself in the Mike Myers “Coffee Talk” voice… well, you’re as poisoned in the brain as I am.) And hey, if you put down a few Dutch Creams, it’ll put you in the perfect mindset to tell everyone around the office the story of the little boy who saved Holland by putting his finger in the dike. 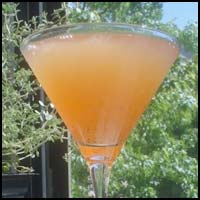 Shake all ingredients with ice and strain into a Collins or rocks glass with a few large ice cubes. Garnish with citrus and berries as desired.

This one is considered a classic pirate drink. Romanticized pirates. Eye patch, pegleg, bird on the shoulder, treasure map, walk the plank, buried treasure, yo ho ho, on the lookout for a ticking crocodile, the whole nine. Not modern pirates with semiautomatic machine guns. I don’t think they have any desire to garnish their drinks with berries. 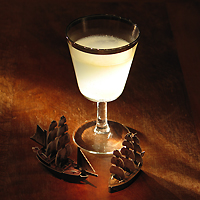 Shake with ice and strain. Spare the garnish.

I’ve only had one gimlet in my days and it was a vodka gimlet. Vodka is conspicuously absent from any of the 11 drinks on this list and that’s because it’s not one of the 12 bottles. The authors explain its exclusion, quote, “Classic cocktails are meant to taste good. Vodka is meant to deliver alcohol while you taste the other ingredients … Why drink something flavorless?” Trust me, if you buy the Rite Aid brand, it ain’t flavorless. 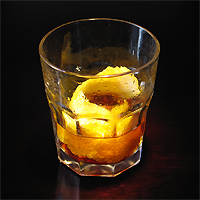 Chill a rocks glass with ice. Discard the ice and then rinse the glass with absinthe, coating the entire inside. Discard the absinthe. Set aside. Place the sugar cube in a mixing glass and dash the Peychaud’s onto it. Add water and muddle together until the sugar is dissolved. Add the spirits and stir. Pour into the rocks glass. Adding a couple of cubes of ice is traditional but, in my opinion, a matter of taste. Twist a lemon peel over the surface of the drink, then add to the drink as garnish.

All of the other drinks on this list seemed pretty simple to make. This one seems a more complicated. I love that they suggest you chill the glass then rinse it out with absinthe. That’s some hardcore drinking right there. It’s like the people who dip their marijuana cigarettes in embalming fluid or something.

(Yes, I only know of that practice from an episode of Six Feet Under I saw like nine years ago.)

Anyway, this drink has been called the “original American cocktail.” I don’t know if that’s true — perhaps Nicholas Cage can crack that case next — but I do know that any melting pot drink that involves cognac (France), rye (America) and bitters (Haiti) in an absinthe (Swiss) soaked glass really does sum up America. Might as well drink it in a little pink house while a little kid chases fireflies outside and you’re watching Hacksaw Jim Duggan on TV.