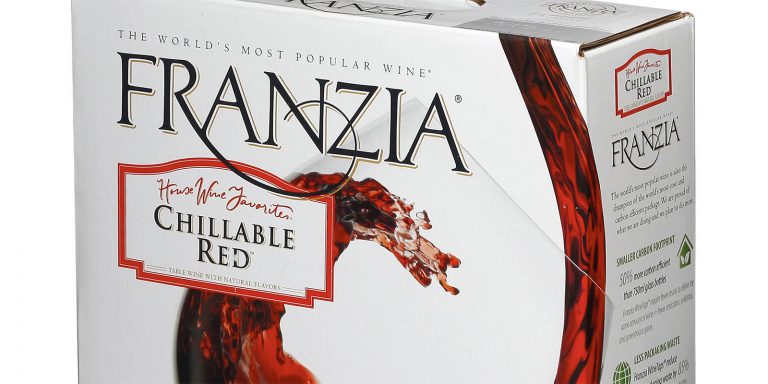 A mathematical calculation to figure out whether it’s box wine, 40s, Mad Dog, Natty Ice or something else.

A little while back, I did a list of the 11 Best Beers To Get You Drunk But Not Make You Fat. It ended up being fairly controversial — disputes over the actual alcohol content of Beck’s Light (versus Beck’s Premier Light) ended up putting a big ol’ asterisk on the entire thing.

Today, I’m here for redemption. It’s the perfect list for a Monday morning (?) — the 11 cheapest ways to get yourself all drunk.

For my calculations, I based my formula off the one used on the excellent website Get Drunk Not Broke (although I found my numbers came out differently than theirs, usually because of discrepancies over cost).

See, kids — the stuff you’re learning in math class does come up in real life. 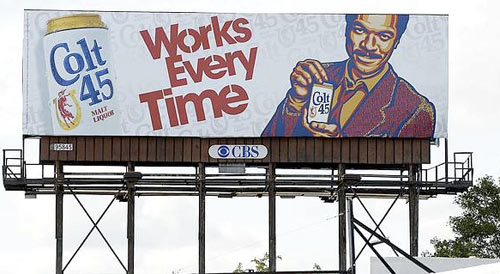 I never realized there were two classes of 40s until I started working on this list. These are your standard 40s — specifically King Cobra, Schlitz, Olde English and Colt 45.

They’re a great value — taste not withstanding — and ideal for duct taping to your hands. 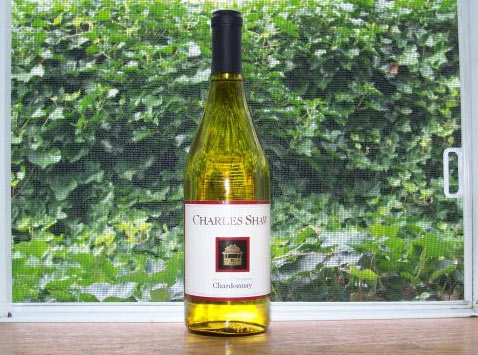 Ah, Trader Joe’s — home of bread that spoils in three days, parking lots that fill bargain hunting yuppies with murderous rage, and, yes, some of the cheapest wine in the country.

I actually prefer the white Two-Buck Chuck to the red (which is featured later in this list) — unlike the red, you only need to be KINDA drunk not to notice how bootleg the white tastes — but, because of its slightly lower alcohol by volume percentage, it’s not quite the same value. 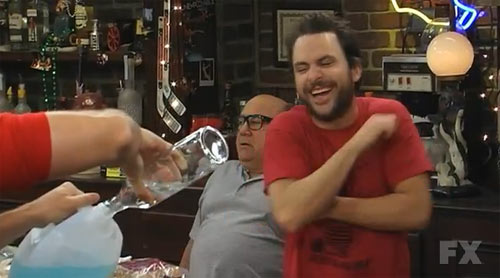 When I was a sophomore in college, my friend Bruce would only drink Everclear. He’d put two shots of it into a 20-ounce bottle of Hawaiian Punch. About an hour later he’d have a nice red ring around his mouth (like a kid) and be just stumbling drunk (like a French kid).

We’re fairly sure the year of Everclear drinking bored a hole in his stomach. But man, was it an easy way for him to get from point A to point B. Verdict: Totally worth it. 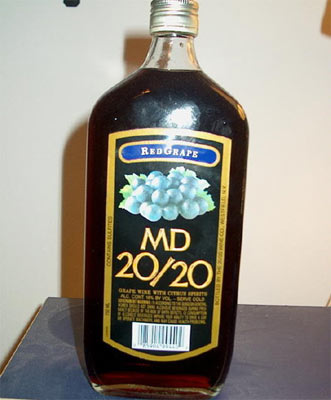 I’m afraid, though, that the younger generations don’t know about MD 20/20 (which, by the way, goyim, technically stands for Mogen David and not Mad Dog), as it continues to rapidly vanish from stores’ inventory.

A few weeks ago, my 26-year-old friend Molly and I were in a questionably-reputable liquor store and I spotted it in the fridge. I joyfully pointed it out and she had never heard of it. And she’s Irish. Terrible sign for brand recognition there.

These are the more potent 40s — ones that hit 8+ percent alcohol by volume (at least in states where that’s legal). We’re talking Steel Reserve 211, Olde English 800 High Gravity and St. Ides.

I’ve never tried St. Ides, I only know it from this infamous commercial where they had Ice Cube rap that St. Ides “get your girl in the mood quicker / get your jimmy thicker.” I’ve put down a few 40s in my time. They have never effected the girth of my penis… at least, definitely not for the positive. 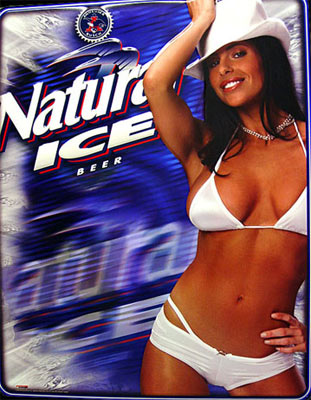 The only beer on this list, and it’s Natty Ice. Of course it is, right? It shares so much in common with everything else on this list: Unbelievably cheap, tastes gross… yet still calls out to you from the shelf even though you REALLY know better. 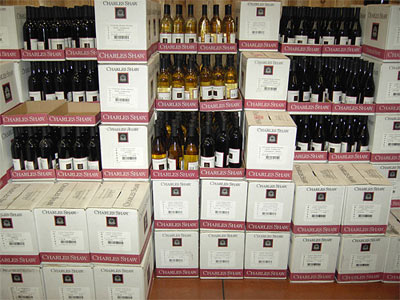 More alcoholic than, but the same rock bottom price as, its white counterpart.

Trivia: You know who owns the Charles Shaw brand? A company run by Fred Franzia. You know what brand he doesn’t own? Franzia. That brand is owned by The Wine Group, which purchased it from Ernest Gallo (of E & J Gallo Winery, the people behind Andre, Boone’s Farm and Carlo Rossi). Gallo is Fred Franzia’s uncle. 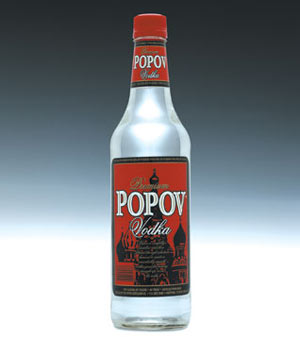 First of all, what is turkey dressing and who wants their vodka to taste like it? And second of all, are they really trying to use wine snob terms to describe a brand of vodka so crappy that even the Rite Aid house brand of vodka is embarrassed to be seen with it? (And that brand might actually have chunks of potato still floating in it.) Is that a joke?

I guess not — for their description of the equally-low-end Gilbey’s Gin they write: “Reminiscent of spices, minerals, and dried herbs. Medium light body with a delicate, creamy texture.” That’s just what I want in my gin: Creaminess. 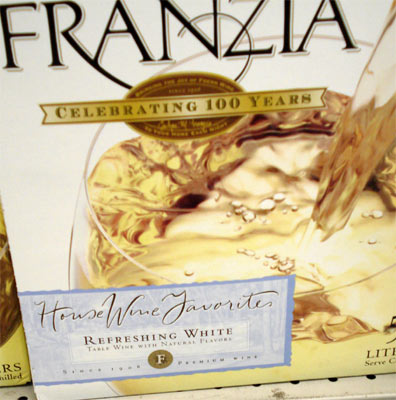 You know what’s an underrated drinking game that I wish we’d known about in college? The Tour de Franzia, where everyone puts on bike helmets and sits around drinking boxes of wine. I mean, I played dozens of other stupid games in college — from broomball on ice to “drink three beers during the course of a song” to “throw water balloons at Northwestern’s many skunks” to just the tip — how did that one escape me? 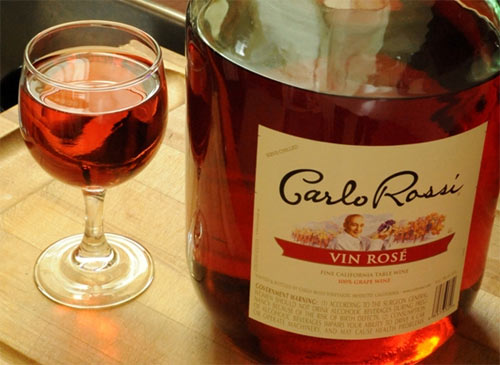 I have a soft spot for wine in jug form. It just feels so… American. Like, you show up to a housewarming with a bottle of wine — they thank you, put it on a shelf or in their wine rack, and have no idea who gave it to them when they eventually drink it a few months later. You bring a jug to a housewarming party — there’s no way they forget about you. 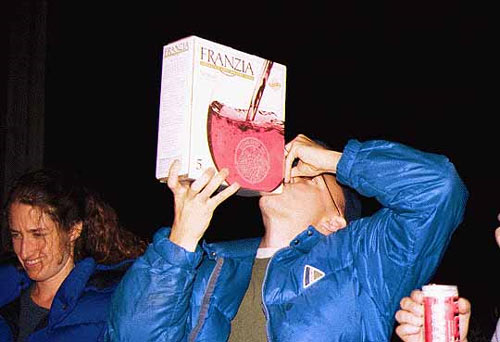 Jesus turned water into wine. With Franzia, it might be economically beneficial to flip that equation around.

Finally, for reference, this is all based on drinking at home — if you go to a bar, things get astronomically expensive. If you’re at a place that charges $3 for a Bud Light, it becomes $17.86 per three ounces of alcohol — the fifth most expensive way to get drunk. It’s more economical to buy Patron silver and drink it at home.

Also, a few things that just missed the top 11 cheapest list were Pabst Blue Ribbon, Keystone Ice, Mickey’s and Bacardi 151 Rum. Absinthe didn’t crack the top because of its prohibitive cost and Cristal came in dead last — with 12.5% abv and $300 a bottle cost, it was almost five times less economical than the drink that finished in second-to-last place… O’Doul’s.

Scientists Have Determined Just How Fun It Is to Get Drunk