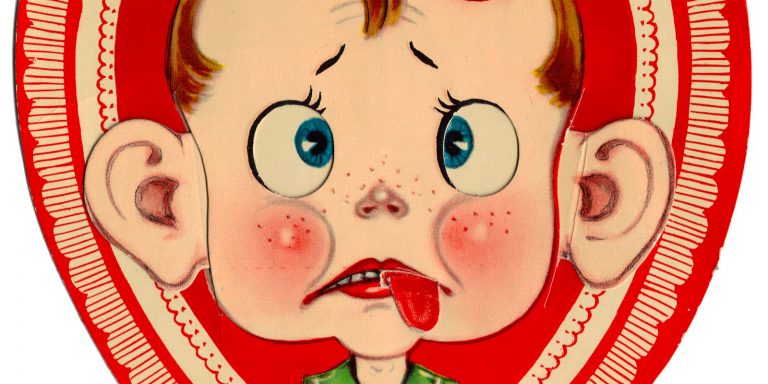 Once upon a time, valentines featured some really messed up sexist, racist, violent and inadvertently sexual madness. Here are 11 prime examples.

The Internet has a wonderful collection of vintage Valentine’s Day cards. And by “wonderful,” I mostly mean “horrifying.” There’s nary a “choo-choo-choose you” or Go-Bots valentine to be found but dozens and dozens of sexist, racist, violent and inadvertently hypersexual ones at every turn.

I collected these 11 old valentines that would never fly today. Check ’em out…

1 | I’m aiming straight at your heart 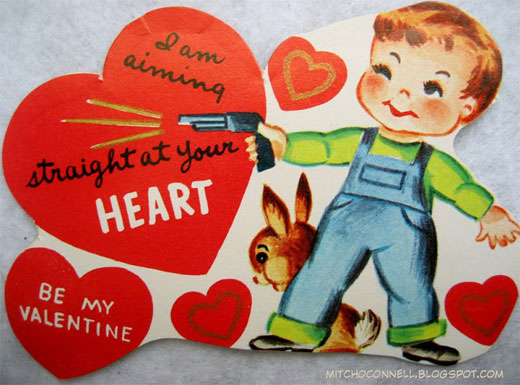 Considering a kid today gets suspended from school for biting a Pop Tart into the shape of a gun, I’m fairly sure a valentine where a little boy is popping off three rounds — ostensibly at a girl’s chest — wouldn’t make the cut. Even if there is an adorable bunny there to soften the blow. 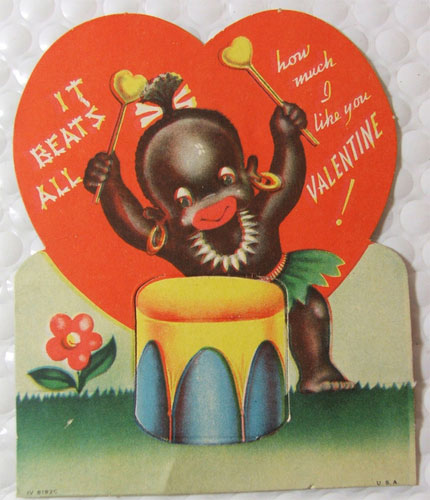 There might not be a more jarring sight than old racist cartoons of black people. The scary part is — this wasn’t even the most offensive one. I found a valentine featuring a black character that was too horrifying to put on a list of horrifying valentines. If you must see it, it’s here. 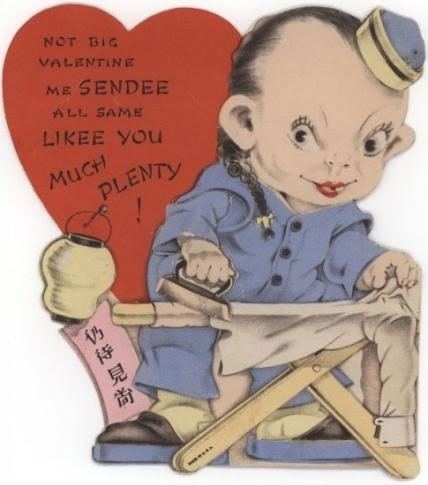 But, of course, black people weren’t the only ones featured in grotesquely racist old valentines. Here, they apparently had a two-part agenda. 1. Squeeze as many Chinese stereotypes as possible into a relatively small space. 2. Um, connect it loosely to valentine’s day (if there’s time, which there almost certainly won’t be). 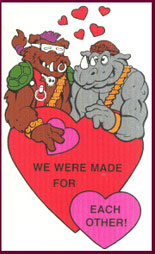 Yes, Bebop and Rocksteady were always up there with Batman and Robin and Ace and Gary when it came to a two-man cartoon duo you kinda believed were secretly in love. Today, gay tolerance is at its highest level in history — still not particularly high, unfortunately, but improving. Let’s keep on reaching for that rainbow, society! Anyway, a side effect of the tragically overdue expansion of gay tolerance has been to eradicate things like this valentine. Today’s Valentine’s would either explicitly celebrate gay love… or steer completely clear of anything that might even remotely have homosexual undertones.

5 | I ain’t afraid of pirates, I love that caveman stuff… 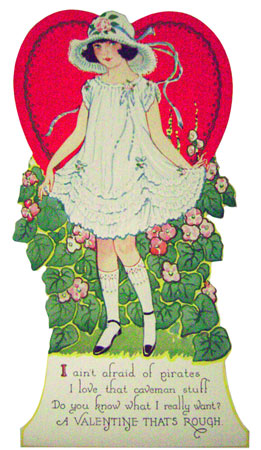 In the Law & Order: SVU era, there’s no place for adorable girls to talk about how they like it rough. This valentine would actually give Olivia Benson such a massive heart attack that Ice-T might actually have to take the lead on his first case ever. 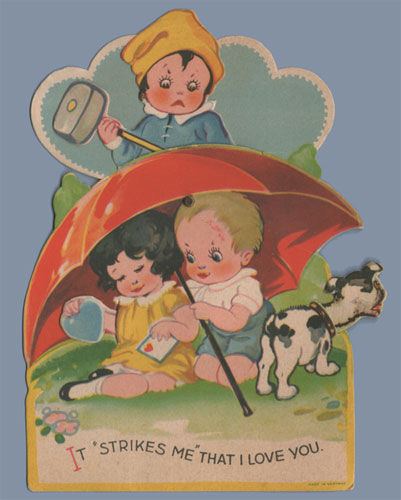 This kid has a sledgehammer and bad intentions. Even one of those two things would be enough to get this blacklisted today. 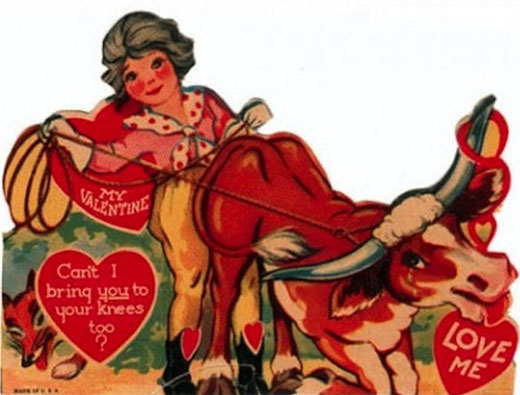 I know this one is really bad when it took me until my now — as I’m revising my final draft of this list — to figure out it wasn’t actually depicting a woman givin’ it to a bull. During research for this list, photo editing, uploading and writing the first draft I thought that’s what was going down. 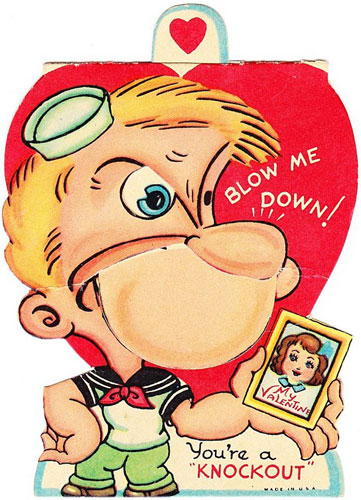 When I was a kid, we would’ve been laughing about the term “blow me down” by about 4th grade. Which means today’s kids would understand it about 17 minutes into kindergarten.

Today, you’re only allowed to say, “You’re unusual” to a kid if it’s followed by, “and that what makes you special and perfect and the world will provide you with everything you ever want.” You CANNOT follow, “You’re unusual” with, “because you’re a girl with a beard.” 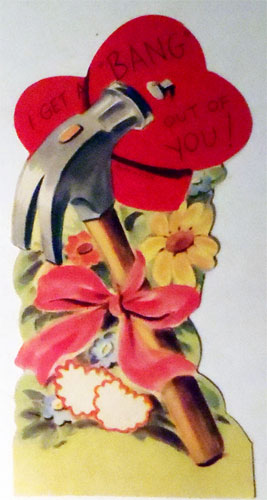 Obviously the sexual connotation here is a problem; can’t have kids talking about banging each other. And featuring a deadly, zero-tolerance busting weapon like a hammer just — err — puts another nail in the coffin. I’ve been reading kids’ valentines all day. My pun game might be a little loose. 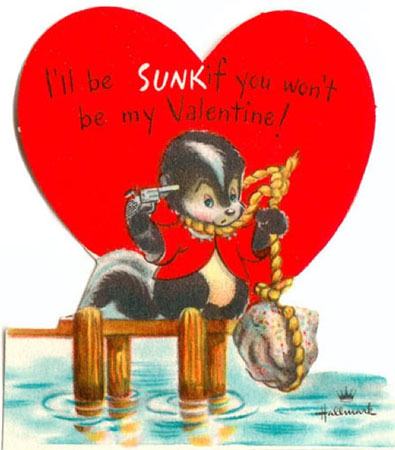 These days we’re far less likely to suggest elementary school kids should kill themselves over a failed crush. But beyond that — there’s so much wrong with this valentine. Is it only featuring a skunk because the key word is “sunk”? Isn’t shooting yourself in the head and jumping off a pier with a rock tied to you — pardon the expression — overkill? And, most important: Where can *I* get a rock made out of funfetti?

Credit for many of these goes to this vintage Valentine’s Day card site.