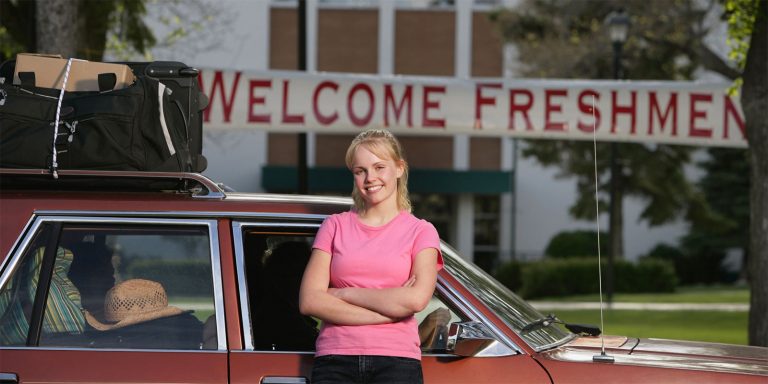 Some non-traditional advice for everyone starting school right now. Trust me. I went to college once upon a time.

Ever since I did the list on 11 Things College Freshmen Should Expect During That First Thanksgiving Back Home, I’ve gotten requests for more high school/college advice lists. I figured with back-to-school going on, this was a good time to bust this one out.

So here are 11 important bits of advice for college freshmen. A few of them are fairly nontraditional (and might even venture into controversial territory), so please listen at your own risk. Not that anyone will listen. A crucial part of being a college freshman is developing a genuine belief that you’re an infallible genius.

If you’re planning to hit law school, med school, or a consulting/banking/a six-figure career directly after graduation, this won’t be good enough. In just about every other case, it’s fine (even if you’re planning to go back to school down the road — good test scores and work experience will compensate).

I recommend starting out by working harder than you did in high school and then tweaking things once you learn how much effort it’s going to take to score above a 3.0.

Just don’t let your GPA dip below the Mendoza line and get into the 2s. It plays into the same effect as retail pricing. You know how $9.99 is psychologically proven to be more effective to get people to buy something than $10? A 3.001 didn’t waste you, your parents’ and Obama’s money… a 2.999 did. And it also didn’t waste valuable college and life experience time (which, arguably, is the equal goal of college).

2 | Talk to everyone possible during the first week

During the first week or two of school there’s this underlying vibe of “no one really knows anyone so you can talk to everyone.” Capitalize on that. No such moment ever happens again for the rest of your life. (Except at maybe a regional convention for you and your fellow insurance professionals at a Holiday Inn Express in Tallahassee. But you can’t really hold out for that, can you?)

3 | Instead of taking a bunch of liberal arts classes, double major in something practical

There are two kinds of classes in college: The ones that teach you practical skills and liberal arts classes. Not that those classes are bad — obviously there’s a place in the world for liberal arts majors (cue generic Barnes & Noble joke here) — and by all means take some you’re interested in. (I loved the one archaeology and one philosophy class I took.)

But if you’re looking to leave college with two decades of debt, four years of fun AND skills to apply in the world — really think about going “science” over “art.”

In my collegiate experience, my regret is that I didn’t double major my journalism with computer science — I just did journalism. (Thus my punctuation tricks up and down my lists to avoid comma splices.) Double majoring would’ve been a much, much better usage of my time that all the psychology and sociology classes I took to fulfill my course requirements. That stuff has come up zero times in my (gulp) 10 years since graduating.

I can’t really talk, since two of the people who would become my best friends for life I met thanks to living on their floor. (And three more of my best friends were on my floor the following year.) (I probably have too many best friends. I clearly hand out that title the way Cowboys and Aliens handed out writing credits.)

That being said… there’s an entire campus of new people out there. And the random number generator at the housing department isn’t better at knowing who you should be friends with (and who you should date) than you are. The best ways to meet people are through activities and, to a lesser degree, classes. The worst way to meet people is to drunkenly stumble through random hallways tearing down dry erase boards or trying to impress people by inviting them to your room to watch shaky, handheld camera movie torrents.

5 | This is not the time to launch an untested nickname

I get the whole “fresh start” aspect of being a college freshman… but don’t take that too far. Ultimately everyone reverts to being who they are (for better, not worse) — might as well not make that long trip back to reality saddled with a horrible self-imposed nickname like “Big Dog” or “Sassy.”

Laundry makes people want to hang themselves. On a weekend you have to fight for machines. Which prolongs the process. It also increases the chance you’ll give up and start wearing underwear inside-out or doing my patented move… going out and buying yourself new socks to float another week.

This isn’t the time to finally take on the Deus Ex series or challenge yourself to beat every single Zelda from the original all the way through Skyward Sword. Don’t want college to pass you by while you’re killing millions of wild boars to get your experience points up.

Two reasons. One: By the time you graduate — hell, by the time you’re done unpacking — you will have enough stuff posted on there to make sure you are completely and totally unhirable.

And two: Sadly, this one might hit home more — if you set it to private, all these new people you meet are actually going to have to friend request you to stalk you. And then you’ll actually be connected with them. It’s like not buying the cow when you can get the milk for free. In this case the cow being your photo albums and list of favorite movies. Or something?

There’s no “Freshman 15.” In America today, we all gain 15 pounds just by being in a room with carbohydrates. Plus, 15 pounds during freshman year of college is a rite of passage — helps turn you into a grown-up. Let’s just make sure you don’t balloon beyond that.

And there are two strategies. One: Avoid late night pizza. Your 18-year-old metabolism can handle whatever you do to it at the dining hall… it can’t combat both that and Papa John’s at 2:00 A.M.

And two: Take advantage of all the people around to do something active. It’s the only time you’ll always have a tennis partner, a racquetball partner, a pickup basketball game or (reserve judgment about hippies) an ultimate Frisbee intramural league. You don’t just have to go run on a treadmill every day in college.

10 | It isn’t high school, so don’t join too many extracurricular activities

When I was in school, I chose college radio because it was both fun and career-oriented. (Not bad college radio, which is a mix of dead air and music no one has ever listened to before and will never listen to again — I had a pro wrestling talk show at 4:30-6:00 A.M. one night a week. We were surprisingly popular. It was the Monday Night Wars era.)

In the real world, The Man will force you to wake up. (Unless you get into the glory-filled world of professional writing. Then you get to see sunrises… right before you tape a black sheet up over the window so you can block them out and get to sleep.) No need to get started waking up in college. Avoid early classes as much as your degree allows.

Also dodge discussion sections and other extra class obligations that don’t count toward your grade (just against it if you don’t show up). You’re paying jaw-dropping tuition prices to hear a professor teach you… not so you can hear a bunch of other kids and some undeservedly smug TA sit around looking for existential themes in The Autobiography of Benjamin Franklin.

Good luck. Enjoy every single day. Also, beware of grain alcohol, people who blast music out of their dorm rooms on the first day, forgetting to set your phone to vibrate before class, professors who have reputations for being dicks because those reputations are usually quite deserved, and becoming known as the person who has a printer and lets everyone use it. And make sure to enter all of your test and paper due dates into a calendar on the first day of class. Can’t tell you how many times I wish I’d done that.