What happens inside an elementary school science textbook written by young-earth evangelicals? I bought one to find out.

A few months ago, I was reading about homeschooling, because I do things like randomly reading about homeschooling. I read an article that mentioned a family using science textbooks produced by Bob Jones University. (If you’re not familiar, that’s a large, for-profit, evangelical Christian university in South Carolina.) I had to see what one of those textbooks was like. I bought one for a few bucks on Amazon and a few slow shipping weeks later, I had my answer.

I purchased a copy of Science 4 for Christian Schools, an evangelical-written and -approved science textbook published in 1990. According to the stamp on the inside cover, my copy was previously owned by The Country Church & Country Christian School in Molella, Oregon. So, thanks guys! 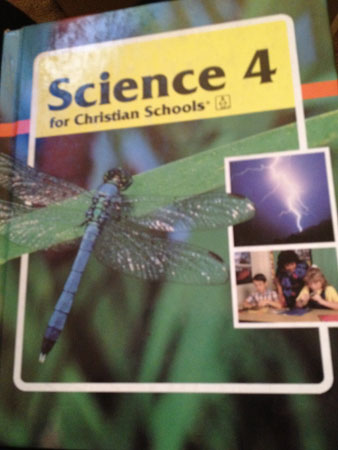 I read through the entire thing (it’s quite short) and picked out these 11 pages and excerpts to share. Let’s call this an adventure in anthropology. Here are 11 highlights from an evangelical-written science textbook, written and approved by the Bob Jones University young-Earth creationism team. 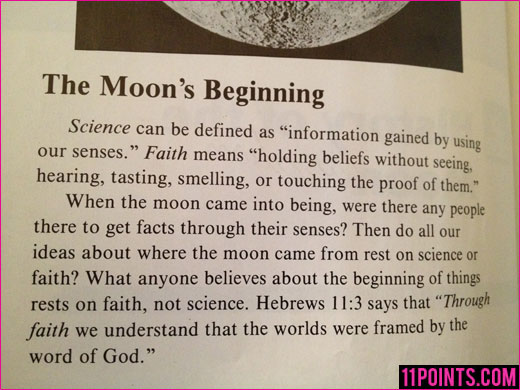 This is the first paragraph of the book and while, on the surface, it’s about the Moon, it’s actually setting up the thesis statement — and perpetual paradox — of the entire textbook. This is a science textbook struggling at all times to find the balance between science and faith. And here, they establish their default position on that issue, which is actually deviously clever: Forget popular opinion, science and faith are not mutually exclusive. In fact, because none of us was there to witness the origin of things, science IS faith. And we operate under that paradigm for the rest of the book.

Now, sure, to make that work, it takes a fast-and-loose (and condescending) definition of science and the outright dismissal or ignoring of generations of facts, data and evidence. But still, damn clever. We’ll get a lot more into my feelings on that cleverness in the 11th point.

I want to pick this apart, I really do — but all I could think of when I saw this one was the famous Who Wants to be a Millionaire? screenshot… 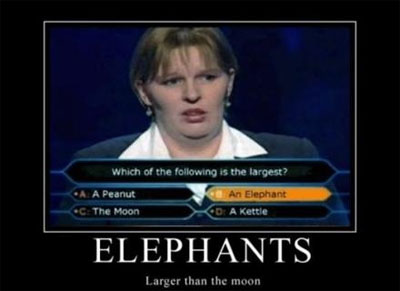 3 | All theories are guesses, but not all guesses are theories 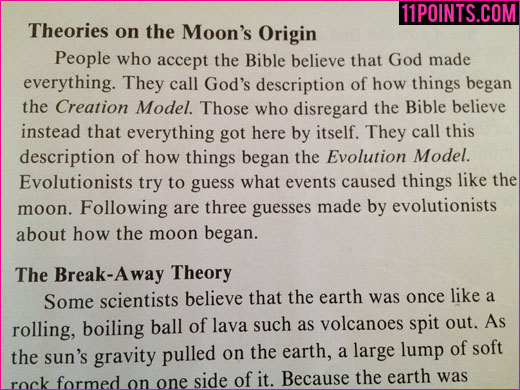 There’s semantic work at play here. In the subhead, they refer to “theories” of the Moon’s origin. In the copy, the word “theory” has vanished, and has been replaced by “guess.” And, obviously, those words have very different connotations. “Theory” comes off like it’s based off research and study and might be true; “guess” just rolls pejoratively and dismissively off the tongue. And I’m theorizing that didn’t happen by accident. 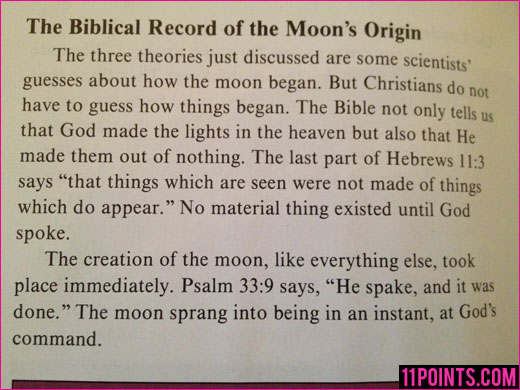 It sure must be easy to take a test when “God did it” is the right answer to every question.

I appreciated that the book, written in South Carolina, went with “Civil War” and not “War of Northern Aggression” or “War Between the States.” When I was in the South a few years ago, I heard both of those latter two — a lot. And I didn’t even make it over to South Carolina, where I’m lead to believe every home has an “In case the North starts shit again, break glass” musket in a case. 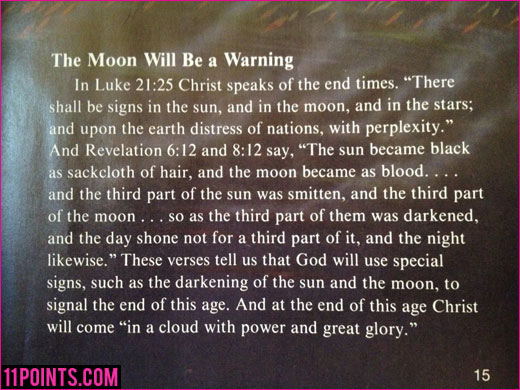 This stuck me as the strangest page in the textbook. This one REALLY strays away from the science thing and goes straight fire-and-brimstone. And like two pages later we start the chapter on plants.

Also, if it seems like there’s a LOT of material on the Moon, there is. The first chapter of the book is all about the Moon. Seemed like a strange opening chapter to me, until I read it and figured out why it got that spot. The Moon appears to be a really strong way to make pro-creationism arguments in a way that eight-year-olds can understand. The entire chapter feels someone tacked on too; especially since, later in the book, there’s another entire chapter on the Moon that never mentions God or creationism.

7 | Grand Canyon: Proof of a young Earth or not? 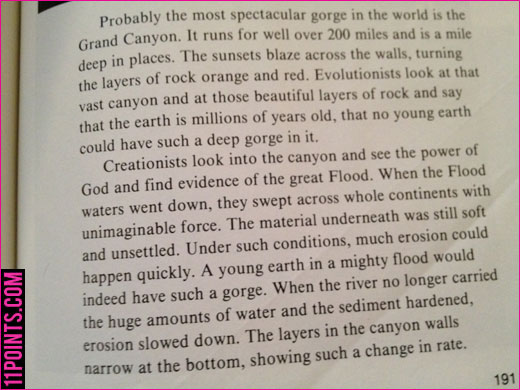 The syllogistic logic here for why the Grand Canyon is evidence of a young Earth is dizzying. I also like the subtle implication that non-Creationists dismiss the beauty of the Grand Canyon because they just think it’s old. Although, in the authors’ defense, when I went to the Grand Canyon, I was in a really bad mood and didn’t find it as breathtaking as you’re supposed to. So maybe they’re on to something.

8 | Glaciers and their water 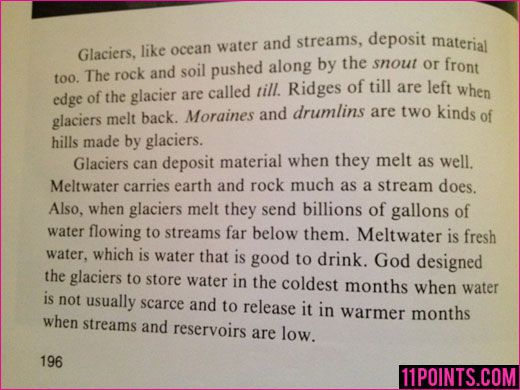 This textbook was published in 1990. This glacier paragraph really makes you wonder how this would be updated today to address global warming. What are the odds that the sentence, “If the globe is getting warm, why is it so cold in the winter?” makes the cut? Better or worse than the odds of an Arrested Development movie coming out?

9 | I asked a friend from Maine, and apparently they really do eat fiddleheads 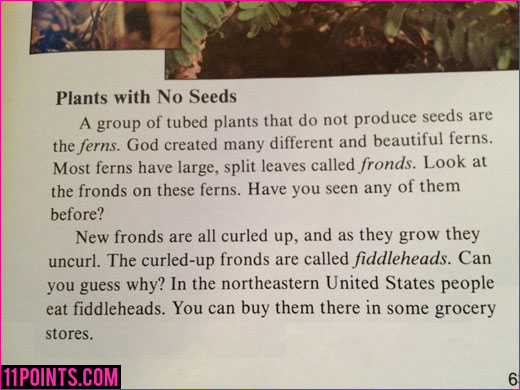 I pulled this off page 63 of the book because it was emblematic of a pattern. After the first chapter on the Moon… which went hardcore creationism… the book actually settled down and became a regular science textbook. It almost seems like they had to throw in an innocuous mention of God or a Biblical quote here or there just to remind everyone that this isn’t your average pagan science textbook.

This one was a great example. Totally gratuitous mention of God creating different ferns. Really, God can be inserted into any sentence in the book — this one just got the call. But you can put it anywhere. “God created a group of tubed plants that do not produce seeds, the ferns.” “Most ferns were created by God with large, split leaves called fronds.” I guess that kind of makes God the Poochie of this textbook. 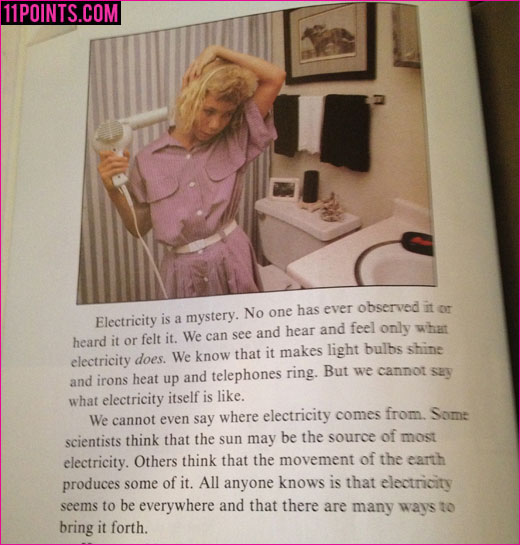 I saved this page for the penultimate point because it’s my favorite in the book. Let’s ignore the weird, weird photo of the girl for a second and focus on the text. “Electricity is a mystery. No one has ever observed it or heard it or felt it … We cannot even say where electricity comes from.”

The reason this page bugged me is because it doesn’t come back to “God created it.” I would actually accept that. This one is just misinformation for misinformation’s sake.

We know exactly where electricity come from. Scientists don’t disagree. And no one’s saying electricity comes from the planet/universe being millions of years old or from dinosaurs or from the spirit generated by the Earth’s religious diversity. This page is just the evangelical textbook equivalent of trolling.

Although, in their defense, perhaps if they make our heads explode that will generate electricity.

11 | The disclaimer, and what it ultimately means 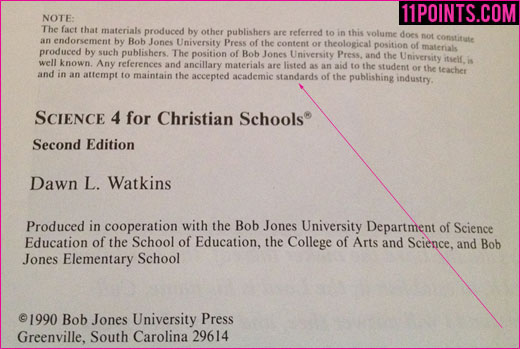 I saved this for last. I noticed this one sentence that brings everything into perspective.

Any references and ancillary materials are listed as an aid to the student or the teacher and in an attempt to maintain the accepted academic standards of the publishing industry.

What that means: We jammed our science textbook full of science because we had to in order to publish this. If it were up to us, “God did it” actually would have been at the end of every sentence.

And I really wish they had just done that.

I’ve taken a snark-ish position toward this textbook, which you expected, even if you’ve never seen this website before. Anyone who runs a comedy website would look at this textbook as comedy. And the “har har look at these religious yahoos” is the official credo of the blogging world.

But now, the twist: I don’t have a problem with hardcore religious faith… and I don’t even have a problem with creationism or teaching creationism to children. Just because I don’t believe that “God did it” is the answer doesn’t mean I’m anti-faith or anti-belief. It’s like I said when I was reviewing Bill Maher’s Religulous — if you’re completely dismissive of religion, that doesn’t make you opposed to zealotry, it just makes you a different kind of zealot.

This is Bob Jones University’s book and it’s completely within their right to put whatever the hell they want in it. The unsettled feeling I got from certain parts of it is a result of them not going all the way. By having some of the book be heavy-handed religious theory and some of it be traditional by-the-numbers science, it sends an ardently blurred message.

And I have a theory (or is it a guess?) of why the book was done that way. By going strong on God early, sprinkling in a few Bible quotes throughout, and occasionally dropping in a completely ridiculous page like the one on electricity, the book comes off more like a propaganda tool than an educational one. All that science in the middle is presented on equal footing with all the young-Earth creation theory in the first chapter — and with the pages on electricity and the Moon’s role in the Rapture. It sets everything up to be an all-or-nothing truth. “Well, all this matter-of-fact science I’m reading seems very thorough and researched, so the stuff I read earlier about the Moon and Biblical theory must be right too, by association.”

It’s like me saying, “I don’t believe in creationism, intelligent design or talking dogs.” By putting the last one in, I’m suggesting all three are equal. I’m suggesting creationism is as outlandish as a talking dog. And to an eight-year-old reading that, that subtext can sneak right on in.

And that’s why this book made me angry. This isn’t a real textbook. It’s, at best, a flawed book that confuses the issue of science and faith and, at worst, a deliberate effort to insidiously brainwash children with inaccurate information to discredit anything except one belief system.

If you believe that the word of the Bible is, indeed, the word of God and the absolute truth, I have no problem at all with that. If you want to teach your children that everything was created by God, I also have no problem with that at all either. But I find it unacceptable, irresponsible and actually sick to trick your children into your beliefs. It’s not only disrespectful to them, it’s disrespectful to your beliefs. It’s a tacit concession that you don’t think your beliefs can hold up in the face of a counter-argument… or that you don’t think you can properly impart your beliefs to your children in an above-board way. When I read this non-textbook textbook, I see classic, not-so-thinly-veiled propaganda tricks. And that just spreads miseducation, confusion and, ultimately, acceptable ignorance. Which doesn’t benefit anyone — including your children, you or what you believe in.

Now, if you’ll excuse me, I have to get down, and put all the soap BACK in the box. That was exhausting.

Hey Idiots: Indiana Is Totally Not Anti-Gay, They Swear They Just Want to Protect Muslim Beards